Lazar’s Notebook: Eight Observations From Day One of Patriots Minicamp 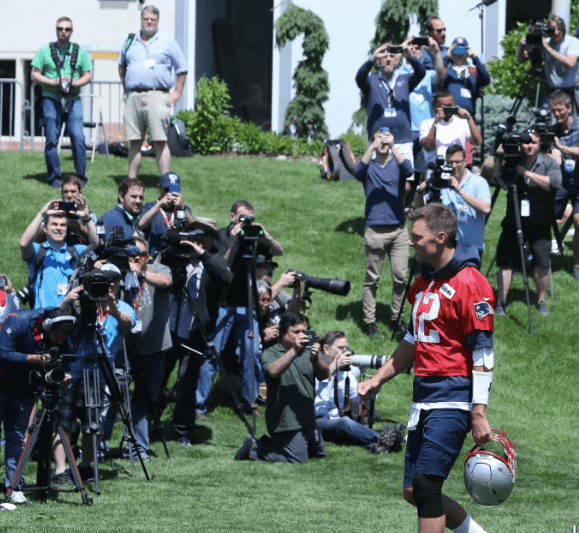 FOXBOROUGH — The Patriots held their first practice of mandatory minicamp on the fields behind Gillette Stadium with quarterback Tom Brady making his return to the team on Tuesday.

Sticking to the same regiment that worked for him last offseason, Brady sat out the voluntary portion of the offseason program.

The good news for Patriots fans is that we can confirm that Brady is still very good at football. We’ll get into more detail later on, but the six-time Super Bowl champion looked like himself out there.

In non-Brady news, there were some notable absences from practice including running back Sony Michel and rookie offensive tackle Yodny Cajuste.

We also know now that tight end Austin Seferian-Jenkins’ absence was because, well, he’s no longer on the team. The Patriots released the veteran tight end on Tuesday.

Here’s what the Seferian-Jenkins release means for the team moving forward and a handful of other observations from Tuesday’s minicamp session:

The tight end position is beginning to rival the wide receiver carousel that the Patriots dealt with last season. Seferian-Jenkins is gone, Ben Watson is suspended for the first month of the season and behind those two are a bunch of unproven commodities. Based on the practice sessions we’ve seen so far, free agent addition Matt LaCosse stood above the rest outside of Watson. LaCosse looks comfortable as a receiver and has enough speed to run the seam and stretch a defense. He also has natural hands and doesn’t fight the ball when it’s thrown his way.

Along with LaCosse, the team seems to like 2018 practice-squader Stephen Anderson as more of a move tight end option. Anderson projects as a “jumbo” receiver rather than an in-line tight end, but he has performed well in these practices and had a heavy workload again today. With the players currently on the roster, those two seem to be ahead of rookie Andrew Beck and redshirt rookie Ryan Izzo.

Brady is back for his 20th career minicamp ahead of his 20th NFL season. Teammates were in awe of the 41-year-old’s work ethic with Ben Watson noting that Brady’s drive to compete is unmatched. Watson mentioned that Brady was walking around the locker room before practice as fired up as ever telling his teammates that it was going to be a great day. Rookie wideout N’Keal Harry echoed a similar sentiment saying that it’s “unbelievable” how detail oriented Brady is at this stage of his career. Speaking of Harry, Brady spent a lot of time throwing the ball the rookies’ way in practice including a side session during a special teams period. Brady took Harry, Ben Watson and James Whte for some red zone work while the rest of the team practiced kickoffs and punts. The Brady to Harry connection is a work in progress, but there are some signs of chemistry between the two already.

The left tackle update will be a bullet point in every observations column this summer, it seems. On Tuesday, we did see 2018 first-round pick Isaiah Wynn in uniform, but he didn’t take part in team drills taking mental reps on the side. Wynn did do some work during positional drills where he was practicing drive blocks, which is notable for a player with an Achilles injury. The Patriots rotated both Joe Thuney and reserve tackle Cole Croston at left tackle. Thuney’s usage falls in line with what we saw at OTAs a few weeks ago, but Croston’s elevation signals he might have a chance to win the swing tackle job. Croston took reps at both left and right tackle. As noted above, rookie Yodny Cajuste was absent from practice as he continues to rehab from offseason quad surgery.

It’s early, but with Tom Brady back at practice, we can start to theorize about the wide receiver depth chart. During team drills, the group working with Brady was: Julian Edelman, N’Keal Harry, Phillip Dorsett, Braxton Berrios and Maurice Harris. Harris continues to stand out. His athleticism and playmaking skills pop in these non-contact practices. It was also a good day for Berrios. More on that later.

Sticking with playing time notes, 2018 second-round pick Duke Dawson and midseason acquisition Obi Melifonwu are getting every chance to make this team. Dawson was playing in the slot and had a nice pass breakup on a Brian Hoyer throw over the middle. As for Melifonwu, his heavy workload and command of the defense are very interesting. He has been in the mix throughout the offseason program and looks like a guy that thinks he’s making the team. Melifonwu was practicing as a strong safety playing closer to the line of scrimmage.

Along with Dawson and Melifonwu, Jamie Collins saw an uptick in reps with the starting defense. At OTAs a few weeks ago, Collins was running with the backups, but he got a look with the starters on Tuesday. Collins is still a rangy linebacker that can chase down ball carriers and eat up grass in coverage, and those skills are visible on the practice field.

7. Notable Players on the Outside Looking In

With the players above on the rise, that means some noteworthy players are moving down the pecking order. Let’s start with the rookies as both Chase Winovich and Joejuan Williams are still working towards reps with the starters. Williams got a few looks, but Winovich continues to play in a reserve role. Along with the rookies, some of the veterans that appear to be on the outside looking are Derek Rivers, Elandon Roberts and Danny Shelton. All three were on the backup field during team drills.

The highlight of practice was a two-handed diving catch by second-year receiver Braxton Berrios on the sideline. Berrios dove underneath a deep ball from Brian Hoyer and completed the catch in style with his teammates erupting in cheers. Berrios popped throughout the day, creating consistent separation and catching everything thrown his way. Last season, Berrios struggled to create separation in training camp, but today he was a tough cover for everyone that lined up across from him. He also consistently extended his arms to pluck the ball away from his body, something that was a concern based on his college tape. Berrios told me after practice that he’s treating things like he’s a rookie all over again, and played like someone that knows he’ll need to earn a roster spot.