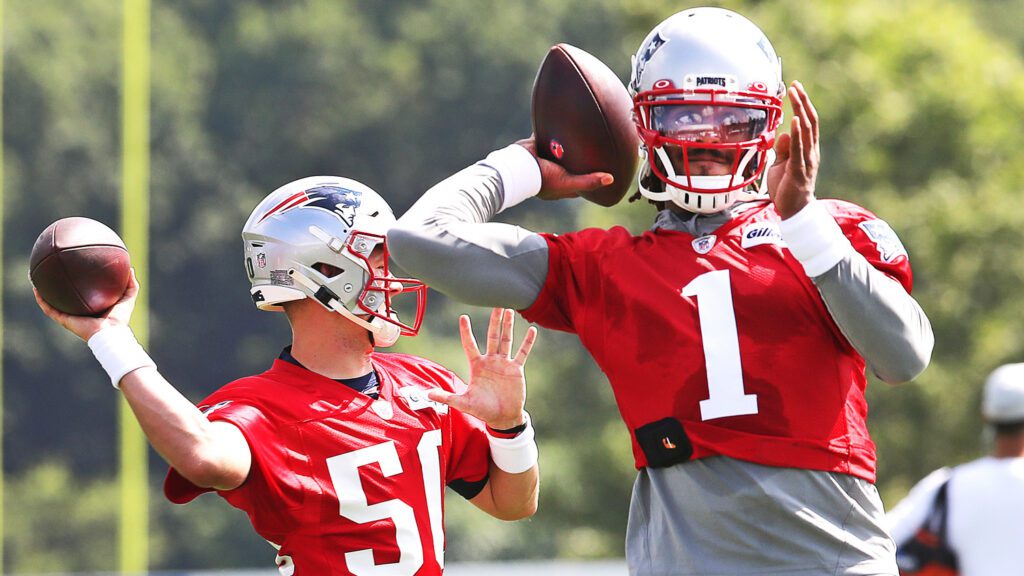 FOXBORO, MA — The Patriots were back in shorts and shells for day seven of training camp on the practice fields behind Gillette Stadium on Wednesday morning.

In another non-contact session, the passing game was a major focus, and the one word that comes to mind with both quarterbacks, Cam Newton and Mac Jones, is inconsistency.

After a solid first day in pads on Tuesday, Newton finished 7-of-13 and was intercepted twice during competitive team drills. Cam would’ve been sacked on one play by a blitzing Harvey Langi, and his throw was undercut for an interception by safety Adrian Colbert.

Jones, who saw 16-straight reps at the end of practice, was also up and down. He threw dimes to Gunner Olszewski (deep post) and ripped one into Meyers on a dig but had a sequence of an interception, near-INT, and a throw behind Olszewski that Myles Bryant broke up.

Patriots head coach Bill Belichick spoke about evaluating quarterbacks last week and said consistency is the most important factor. From this perspective, both QBs are failing there.

Let’s empty the notebook from day seven of Patriots training camp in Foxboro:

Speaking after practice, offensive coordinator Josh McDaniels confirmed what we are seeing on the practice field: Cam Newton has a much better grasp of the offense and understands what the Pats are trying to accomplish with each play call. Newton’s comfortability in the system is substantially better than his first year in New England. However, he’s still trying to find consistency. Newton made a leverage read on an option route to Jakobi Meyers, where he read the linebackers’ inside leverage and threw Meyers open to the outside hip at the top of his drop. A nice fast, in-rhythm throw out of the quick game (good). But his accuracy overall was spotty on Tuesday. Newton forced a throw to Hunter Henry over the middle that safety Adrian Colbert undercut for an interception, made an ill-advised decision on a pass to a covered Jakobi Meyers that J.C. Jackson intercepted, overthrew Nelson Agholor (wheel) and Kendrick Bourne (crosser), and was bailed out by N’Keal Harry on a slant. Cam didn’t have the same control of the ball as he did on Tuesday, but his decision-making and reads are improving.

During a stretch of 16-straight reps for Jones, the Pats rookie made one of those “first-round QB” type throws. With an outside rusher coming around the corner, Jones stepped up in the pocket to avoid the rush and found Olszewski downfield on a post pattern, dropping a dime between two defenders. In that sequence, Jones threw a dart to Meyers coming across the field into a tight window and hit N’Keal Harry in-stride on an in-breaker during 7s. There are moments where you see it all come together for Jones, but there are other times when he’s clearly still a rookie. That was the case in a three-play sequence where Devin McCourty intercepted him, then sailed one high and was nearly picked by D’Angelo Ross, and threw behind Olszewski on a pass breakup for Myles Bryant. It was unclear if the first interception was on Smith or Jones. Jones was trying to back-shoulder a seam pattern, and it deflected off of Smith’s hands. The Olszewski play came after the bad stretch, a good bounce-back, and it’s clear that Jones’s issues are related to his lack of experience in the system. After the Philly preseason game, we will have two preseason games and joint practices with the Eagles to evaluate. That’s when we’ll get a full read on Jones.

3. Player of the Day: The Conundrum With WR N’Keal Harry

Take this with a training camp-sized grain of salt, but I’ve covered all three of Harry’s camps, and this is the best he has looked in practice by a wide margin. Harry led the team with six catches in Wednesday’s practice. He has more wiggle at the top of his routes and uses his size and catch radius to his advantage. Harry broke away from cornerback Joejuan Williams on an in-breaker where Jones hit him in stride, a potential off-to-the-races play. Later on, he fully extended to save an off-target throw by Newton on a slant to make a diving catch. I honestly don’t know what the Patriots will do with Harry. He requested a trade, then sort of took it back in his only media availability of camp so far, and is now stacking together good days. He was also good in yesterday’s practice, especially in one-on-ones. It’s a positive development that Harry is starting to make plays. Trade him, or don’t trade him? Has he figured it out or not? Tough call.

On back-to-back plays, Jackson reminded us why he’s considered one of the top young cornerbacks in the league. In the first play, the Pats’ corner smothered a hitch route by Jakobi Meyers and intercepted Newton. He ran the route better than Meyers. Then, Cam tried to hit Meyers on an inside option route, and Jackson was there to break it up. Jackson is good at football. That’s the note.

We are seeing some developing chemistry between rookies Mac Jones and seventh-round pick Tre Nixon. Nixon was a vertical receiver on the outside at UCF, but he’s working as an inside slot receiver and is piling up catches against the scout team defense with Jones at QB. The two Pats rookies are finding success working option routes between the numbers, with Jones beating the coverage on quick throws. It’s day seven of camp against the scout team defense, but there is something brewing there.

Gauging Gunner’s chances of following the Julian Edelman career path, there are a few things that stand out. First, Olszewski often breaks away from the other wide receivers during positional drills to rep returns with the specialists. Sometimes that’s fielding punts from the machine or working on kickoff return, but he’s with the special teamers more than the receivers. I would also say that Gunner is a better vertical route runner than a shifty slot receiver type, which was evident by his deep touchdown from Jones on Wednesday. Right now, Gunner’s roster spot is safe because of his return skills. We see flashes of his burst to get behind the defense or work the intermediate level, but it’s mainly with the backups/against the backups. The Pats aren’t forcing the issue with Olszewski as a receiver right now.

7. CB Joejuan Williams is in the Danger Zone

If N’Keal Harry is breaking out as a top draft pick in 2019, cornerback Joejuan Williams is going in the opposite direction. Harry beat Williams on two occasions during team drills, and Williams’s hip transitions through the break point are simply too slow at this level. His length shows up from time to time in his ability to contest passes downfield, but it doesn’t happen often enough because he isn’t in phase. The Patriots are thin at cornerback, especially outside corner, so they might need Williams regardless. But he’s squarely on the roster bubble.