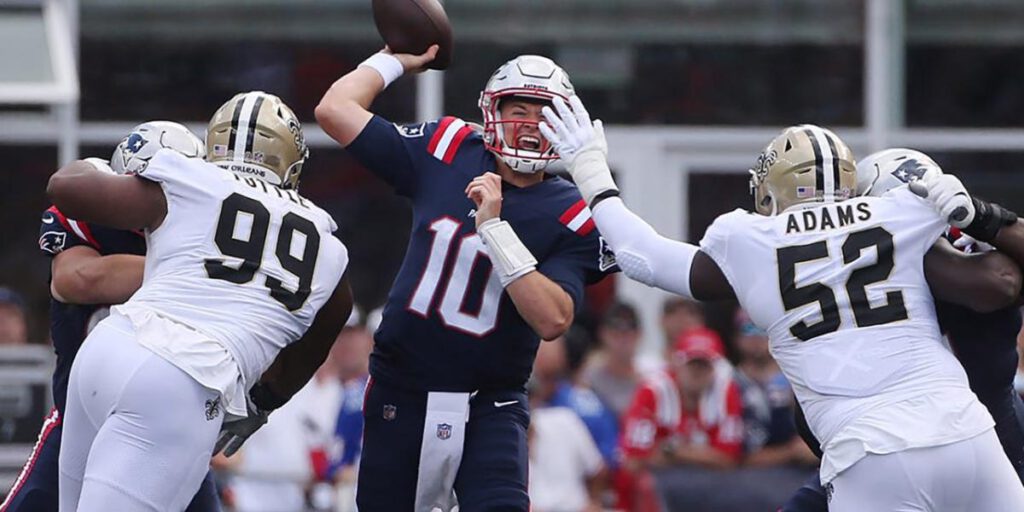 The number one question with the Patriots’ offense is how do they protect rookie Mac Jones better? An offensive line that was a perceived strength is not playing up to that standard.

Before we discuss the breakdowns, context is important in all evaluations, but we bring up the following statistics as a beacon of hope that the protection for Mac Jones will improve.

In the first three weeks, Jones’s pressure rate of 31.8% ranks 17th out of 35 quarterbacks. Furthermore, New England’s O-Line is 17th in pass-blocking efficiency, which measures pressures on a per-snap basis weighted towards sacks, and 15th in PFF’s pass-blocking grade.

The Patriots’ pass-blocking certainly needs to improve, but this is a middle-of-the-pack unit based on the metrics. Believe it or not, things could be worse, which means they should get better.

Still, the eye test tells us that Jones is getting hit and moved off his spot too often in the pocket, and there’s no doubt that it cost the Patriots big-play opportunities against the Saints.

There are several factors at play, and like anything in football, each play is different.

Although it’s hard to summarize all the issues, here are the main issues in pass protection:

For starters, right tackle without starter Trent Brown is a major problem. Brown’s replacement, Justin Herron, allowed a team-high six quarterback pressures in the loss to the Saints.

Brown’s absence not only affects the right tackle spot, as it also has a trickle-down effect on right guard Shaq Mason and the overall continuity of the line, which brings us to our next point.

According to offensive line coach Carmen Bricillo, “’see it through the same set of eyes’ is something that’s been written on the walls in our meeting room well before I got here.”

Right now, everyone isn’t seeing the game through the same lens, and the numbers back that up. When opposing defenses run a blitz or stunt, the Pats’ PFF pass-blocking grade plummets from 69.5 without schemed pressure to 29.6 out of 100 with a blitz or stunt call.

Here is a perfect example of what Bricillo means when he says, “seeing it through the same set of eyes.”

In this play, the Saints ran a replacement pressure where the off-ball linebacker blitzes and the edge defender drops in coverage on the running back. Andrews passes off the rusher over the nose to Onwenu to pick up the looping linebacker, but Onwenu doesn’t see it the same way and ends up doubling the DE with Wynn, leaving an unblocked rusher. If Mac has time, he has a chance to drop it in the bucket to White on the wheel route.

On Mac’s first interception, Jones steps up in the pocket when he feels pressure coming off the right side and a linebacker rushing on Mike Onwenu at left guard. The QB hit comes when the Saints run an interior twist on center David Andrews and right guard Shaq Mason. Saints pass-rushers Kaden Elliss and Tanoh Kpassagnon do a nice job of physically making it tough on Andrews and Mason to pass them off, but the communication isn’t there between the center and right guard. Somehow, someway, Andrews and Mason need to be more prepared for the stunt.

Here’s another example where the Pats fail to pass off a T/E stunt by the Saints. This time, Kpassagnon takes Onwenu by surprise and muscles through him to Jones for a sack. Again, if Onwenu saw or anticipated this T/E coming faster, maybe he braces himself for contact with Kpassagnon and doesn’t lose positioning on the block.

Although there’s nothing Jones can do about those pressures, there were instances where the Pats’ rookie made life tougher on his offensive line.

“He’s part of the protection. There’s no question. We’ve always talked about it that way, where it’s not just their job to protect him wherever the heck he wants to go,” Patriots offensive coordinator Josh McDaniels told CLNS Media.

“They’re trying to protect him where they believe he’ll be. And then he has to move and manipulate the pocket to allow the blockers, whether they be tight ends, linemen, or backs, to block the rushers and blitzers in a manner that allows him to continue to read the play out.”

Jones is a rookie who will learn these nuances of the game with more experience. However, as McDaniels said, Jones is part of the protection. He needs to master moving around the pocket and have tremendous spatial awareness because he is a pocket passer.

Finding the soft spots in the pocket, maneuvering around rushers with his eyes downfield, knowing his tackles’ landmarks, and dropping to the appropriate depths. All of that goes into it.

Pocket awareness and movement is next-level quarterbacking, so this aspect of the protection issues shouldn’t be overblown into some major storyline that pinpoints Jones as the problem.

Still, part of the learning process for Jones is keeping himself clean and helping out his O-Line.

The Patriots have the pieces to improve in pass protection, especially once Trent Brown returns as the starting right tackle; this is not a talent issue but a mental and awareness problem.

New England’s backs also had issues in blitz pick-up, which were physical, not mental. With James White sidelined for a while with a hip injury, defenses will attack them there.

One idea to potentially cover up the backs in blitz pick-up is to use tight end Jonnu Smith out of the backfield. Throwing “hot” to the backs to beat the blitz is another option, rather than keeping them in the protection.

Patriots head coach Bill Belichick’s comments that the offensive line play wasn’t “that bad” given the number of drop-backs for Jones, 56, is not entirely false. The pressures do add up in a hurry when you’re playing from behind.

However, this offensive line is capable of playing better than it has in the first three games.

1. Identifying When Mac Jones is Checking In and Out of Plays

Trying to guess when Mac Jones is checking in and out of plays is a fool’s errand. Several different variables might make Mac “alert” something or move a piece around, so we are guessing. All we can know is Jones himself admitted that he needs to stick to the play that is called more often in the red zone.

2. Ranking the Issues in the Red Zone for the Patriots Offense

If we had to rank the issues for the Patriots offense in the red zone, they would be as follows: 1. Play-calling, 2. Utilizing the tight ends and 3. Lack of motion. Whether it was Jones or McDaniels, the runs to Bolden were inexcusable, as is the fact that Smith and Henry, two excellent red-zone weapons, are non-factors inside the 20. I keep harping on the motion point, but it was obvious watching Sunday night’s game between the Packers and 49ers. Those two teams get their receivers and blockers advantageous angles by motioning pre-snap. Plus, when the vertical element disappears in the condensed red zone, you have to stretch the defense horizontally. That’s where motion can help. Here’s a stat for you from PFF’s Louie Benjamin:

Why does a team go from one of the most motion-heavy offenses in the NFL to the middle of the pack? The obvious answer is that Brady gave them schematic freedoms that Cam Newton and Mac don’t due to their inexperience in the system. But McDaniels told CLNS Media that we were looking too much into it:

“We haven’t done anything different in that regard. Some games we choose to motion more than others. I think that’s probably fairly consistent throughout the league. Maybe there’s something that you’re doing with the snap count, what have you, that precludes you from using motion a little bit more. Sometimes you want to look at the coverage or whatever. There’s a lot of reasons you could or couldn’t use it. But there’s no ulterior motive on that. We still motion. We want to motion. We try to use motion to help your team or help your skill players gain an advantage if you can. So that would continue to be the case at some point.”

Moving over to the defense, there were two coverage busts on the Saints’ first touchdown drive, but they cleaned those up as the game went along. Overall, it’s impressive that a secondary with a new addition (Jalen Mills) playing such a significant role is tying things together nicely on the backend. Sure, there are one-on-one losses like any defense. But they’re limiting big plays by staying connected.

Jon Jones uses an excellent “robot” technique to get underneath Chris Hogan’s route while Mills and Devin McCourty bracket the deep post. Roboting is when a defender turns his back to the quarterback and seeks out a downfield receiver after play-action. Jones gets his eyes downfield to find Hogan and recovers to take away a big play.

These are the types of third-down reps you love to see from the #Patriots defense. One-robber/cut. Just blanketed across the board on initial coverage. Allow the rush to get home. That'll do. pic.twitter.com/DVOZmweDyi

The Patriots also had several good reps of man coverage in their one-robber schemes. They’re playing competitively back there even without Stephon Gilmore.

Although the big plays on the ball aren’t there yet, second-year DB Kyle Dugger is impressive on film. He moves all around the defense. Dugger has lined up on the line of scrimmage as a force/overhang defender or in press-man coverage, in the box as a money backer, and as a deep safety. He’s playing his assignments well, currently sporting a 72.2 PFF coverage grade with two catches for 12 yards on four targets into his coverage. Eventually, you hope that the splash plays come for Dugger. But it’s a great sign that he’s in the correct spots and is staying in phase in man coverage.

5. DT Davon Godchaux Struggling At Nose Tackle vs. Outside Zone

First, let’s make one thing clear: Davon Godchaux is a good football player. He’s strong at the point of attack, decent at getting off blocks, and there’s a sizable role for him in this defense. However, I’m not seeing it right now at nose tackle. Part of that might be how they’re coaching him, but he’s running himself out of the play too often.

The critical block in any outside zone system is the combination block between the center and backside guard to the play side. They’ll hold up the nose tackle with the center until the guard overtakes the block.

Above, Cesar Ruiz executes the combo block perfectly with right guard Calvin Throckmorton. Godchaux gets caught moving laterally, is washed out of the gap, and the back runs right into that hole for seven yards. Unless there’s something we are missing, Godchaux needs to move north-south more often against zone blocking. He’s getting himself pinned down, and it’s opening cutback lanes. At only 310 pounds, you start to wonder if Godchaux has the size to hold up as a true 3-4 nose tackle.

On a positive note, he was productive in his snaps as a 3-4 defensive end, flashing great upper-body power and two-gaping abilities. Maybe he’s a DE in base defense a la Lawrence Guy? It’s too early to make any grand proclamations, but let’s monitor it moving forward.