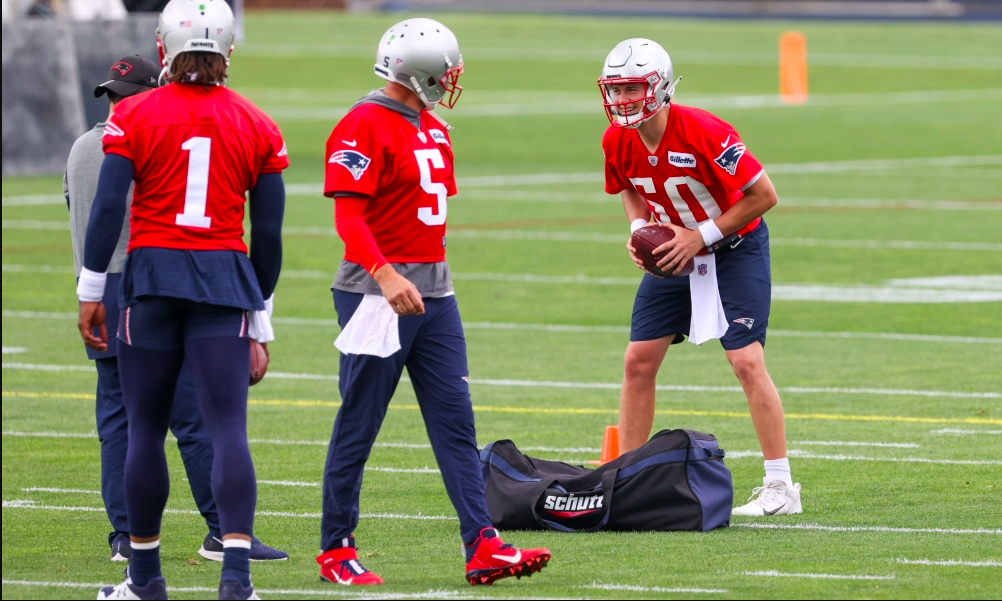 FOXBOROUGH, MA — The Patriots opened training camp with a two-hour practice session on the fields behind Gillette Stadium on Wednesday morning.

As an extension of June’s minicamp, Bill Belichick’s team practiced without pads once again. The pads will go on next week, per Belichick. For now, the contact is minimal.

Two players originally on the physically unable to perform list, offensive tackle Trent Brown and linebacker Kyle Van Noy, participated in practice and are now off the PUP list.

Those that did participate in practice saw the first half heavy on installation in glorified walkthroughs. Then, the intensity ramped up with low red-zone work, where Cam Newton led off almost every period, followed by rookie quarterback Mac Jones.

The two Pats quarterbacks combined to throw 34 passes as the offense worked from inside the ten-yard line, emphasizing making throws towards the back of the end zone.

Here’s everything I saw on day one of Patriots training camp:

1. QB Cam Newton Leads Off Drills, Up and Down Day

Newton was the clearcut leader on Wednesday in terms of who led off drills, but after starting hot, the veteran quarterback cooled off towards the end. Newton went 8-of-15 with two interceptions, one of which was tipped in the air by James White and picked off by linebacker Raekwon McMillan. The other was a bad pass thrown behind Hunter Henry that Adrian Phillips intercepted. Newton’s first 7-on-7 period saw him throw touchdowns to Kristian Wilkerson (stick route) and Kendrick Bourne (corner route), but he had issues throwing high out of the back of the end zone at times. Newton’s accuracy was up and down, but the zip he puts on the ball consistently stands out above the other quarterbacks. I’m not going to read too much into the first practice, but it felt like a pretty typical Newton day.

For a rookie in his first training camp, Jones was good, even if he made some mistakes. The Pats’ first-round pick fumbled a snap (and ran a lap) while also making a few errant throws trying to drive the ball to the flats, and Davon Godchaux batted one of his passes down at the line. In all, he was 9-of-19 with two drops by his receivers. Although Jones made a few errors, he also had arguably the best throws of the day. Jones delivered perfect passes to Nelson Agholor, Kendrick Bourne, and N’Keal Harry that were right on the money as his receivers ran towards the back pylon. His best throw of the day was to Agholor when he came off a covered Jonnu Smith and hit Agholor in-stride on the other side of the field for six. Jones’s ability to lead receivers and anticipate where they’re going leads to some great throws. The Pats’ first-round pick has some rookie moments, but he flashes that first-round talent. Jones continues to take positive steps forward with each practice and remains on Newton’s heels.

After his agent bizarrely requested a trade in early July, it was uncertain whether or not N’Keal Harry would be on the team for training camp. Harry is on the team, was at practice, and made his presence known on Wednesday. As a 6-foot-3 receiver, Harry should stand out during red zone drills, catching two touchdowns, one from Newton and another from Mac. Harry’s first touchdown was on a corner/fade pattern on a well-placed throw from Cam, while the next one was an out route where Harry created some separation against Dee Virgin. Due to the 2019 first-round picks’ low trade value, the team is waiting this one out in hopes that Harry either figures it out or increases his value by playing well in the preseason. Although it was only one practice, Wednesday was a step in the right direction from either perspective.

4. DB Adrian Phillips is the Star of the Day for the Pats Defense

If there were a practice player of the day award, it would go to safety Adrian Phillips. Phillips put the straps on new Pats tight ends Hunter Henry and Jonnu Smith in red-zone drills. He broke up a pass intended for Smith and intercepted a throw behind Henry by Newton. Phillips also contested a pass intended for Henry on a corner/out pattern. Phillips was all over the Pats’ new tight end duo and featured prominently in the defense, even with Kyle Dugger and Jalen Mills. Phillips is going to have a role on this defense one way or another.

The Pats added Agholor to give their offense a much-needed boost of speed, and he did that on Wednesday. Agholor ran two “circus” routes in the back of the end zone that shook Justin Bethel and Mike Jackson. Bethel and Jackson aren’t exactly All-Pro corners, but they stood no chance against Agholor. I knew Agholor could stretch the field and catch the deep ball, but his horizontal breaks are better than expected. The new Pats wideout moves at a different pace compared to the rest of the group, and we didn’t even see him run deep patterns as team drills were exclusively in the red zone.

We spoke about the four-year deal that Wise got this offseason from the Patriots in our camp preview, and if day one was any indication, Wise is going to have a larger role. Wise figures to rotate, and possibly start, on the line as a 3-4 defensive end opposite Lawrence Guy. Free-agent addition Henry Anderson also got some reps in that spot, but Wise led off most of the drills.

Wilkerson is a practice-squad darling of many Patriots fans, and he had the catch of the day by elevating over Mike Jackson to catch a fade ball in the end zone. He also got open in a zone void to catch another touchdown, rounding out an impressive day for the Pats wideout. Wilkerson has tremendous athleticism with a relative athletic score of 9.82 out of ten as a 2020 UDFA. He has the speed and agility to hang at this level.

Patriots cornerback Stephon Gilmore eventually joined his teammates for the second half of practice as a spectator, leaving the spot opposite J.C. Jackson as a wildcard. Williams and Jalen Mills will duke it out for reps at outside cornerback regardless of Gilmore’s situation. Mills will figure into the defense in multiple spots but continues to lead off drills at outside corner. He also played some inside in Wednesday’s practice and broke up a pass intended for Hunter Henry on the goal line. Williams also broke up a pass intended for Devin Ross. Williams struggled to breakthrough in a deep secondary in his first two seasons, while Mills struggled as an outside corner with the Eagles. Now, the two Pats DBs are competing for a role as a replacement to Jason McCourty.