Lazar’s Notebook: How Did Mac Jones Look at Pats Practice With Cam Newton Out? 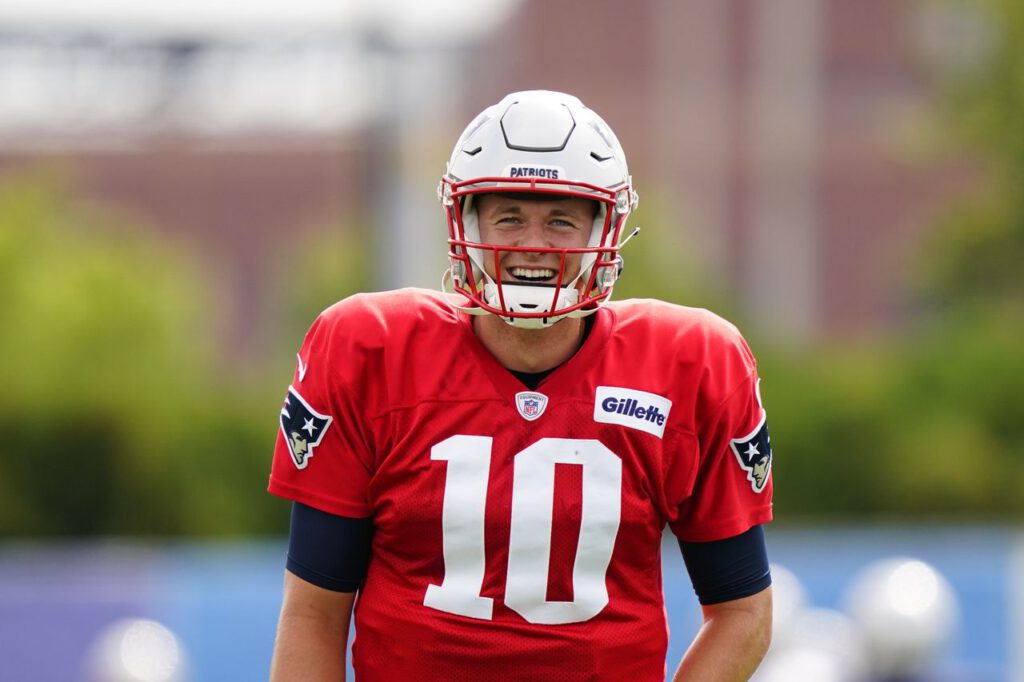 FOXBORO, MA — The Patriots returned to Gillette Stadium for a nearly two-hour full pads practice on the lower grass fields on Monday morning.

In a statement from the team at the beginning of the session, the Patriots confirmed that starting quarterback Cam Newton is in COVID re-entry protocol due to a misinterpretation of the rules.

According to the team, Newton left the New England area to attend a medical appointment. Due to his current status as an unvaccinated player, he now enters a five-day re-entry period that will keep the Pats’ quarterback off the practice field until at least Thursday.

The misinterpretation of the rules is unfortunate timing for Newton as the team prepares for two joint practice sessions with the Giants and their final preseason game on Sunday.

The Patriots are standing by the former MVP as its starter for now. Still, rookie Mac Jones is lurking, and head coach Bill Belichick said during an interview on WEEI radio this morning that one of the avenues that could open the door for Jones is if Newton was “unavailable.”

Newton certainly won’t lose the starting job solely because of the rules mishap that will cause him to miss at least three days of practice, but it presents Jones with an opportunity.

The Patriots’ first-round pick took 31 (17-of-31) of the 11-on-11 reps, while veteran Brian Hoyer only threw ten passes in Monday’s session.

The remaining PUP/NFI listers were also not present, including cornerback Stephon Gilmore.

Without further ado, let’s empty the notebook from day 16 of Pats camp:

As one would expect, first-round pick Mac Jones dominated the reps in Monday’s session with current starter Cam Newton absent. On the surface, Jones’s completion rate of 54.8 (17-of-31) wasn’t great, and there were several practice “sacks” that might’ve brought the rookie down in a game. This wasn’t a statement practice where Jones seized the starting job sans Newton. However, after starting one-of-six, Jones turned it on with strong throws to Jonnu Smith (seam), a deep out to Agholor, a nice “hot” throw to J.J. Taylor out of the backfield, and two dig routes to Kendrick Bourne. From our vantage point, you could see the first dig to Bourne perfectly where Jones threw with anticipation into the first window and the ball met Bourne in the opening. Later on, J.C. Jackson had tight coverage on Bourne, and Jones put the ball in a spot where only the new Pats wideout could get it away from Jackson (Bourne made a nice one-handed grab). There was also a sign of growth from the rookie when he quickly threw the ball away to conserve the clock rather than throwing the ball in-bounds as he did at the end of the first half against Philly, wasting a potential scoring opportunity. Again, Monday’s session wasn’t the day where Jones surpassed an absent Newton on the field, but there are continuous moments in practice where Jones’s fit in McDaniels’s system shines.

Incumbent Nick Folk returned to practice after rookie kicker Quinn Nordin missed a 36-yard field goal and two extra points in last Thursday’s win over the Eagles. It was Folk’s first practice since August 4, but the veteran was shaky, going 3-of-5 on field goals within the 40-45-yard range. Folk’s ball wasn’t traveling very well as he was barely clearing the uprights from 40-plus yards, and his accuracy was inconsistent. Still, the veteran was nails for the Patriots last year by making nearly 93% of his field goals, including two 50-plus yard game-winners. Plus, Nordin fell back to earth after a terrific start to camp and has now missed three extra points in two preseason games as well. The Pats’ kicker situation is up in the air.

After sitting out practice and the win over the Eagles last week, Smith returned and picked up right where he left off on Monday. Smith didn’t have any noticeable limitations, both physical or reps-wise, and caught two balls from Jones in 11-on-11s. Jones hit Smith up the seam pass between two defenders and on a crosser off play-action. Smith’s explosiveness and versatility continue to shine this summer.

Olszewski led the Patriots with four catches for 54 yards against Philadelphia last Thursday and made more plays as a receiver on Monday. On the final live rep of practice, Olszewski beat starting cornerback J.C. Jackson on a goal-line slant for a touchdown on a pass from Jones. The receptions in preseason games are nice additions to the tape for Olszewski, but beating a corner of Jackson’s caliber and securing the catch through some contact was impressive. Although it’s been a quiet start to the summer for Gunner as a receiver, the light could be coming on late.

One of the standouts from last Thursday night’s win over the Eagles was third-year offensive tackle Yodny Cajuste, especially when the nearly 6-5, 315-pounder was pancaking defenders at the second level. We saw some more of Cajuste’s athleticism when he got out in front of a toss play in Monday’s practice, which got offensive line coach Carmen Bricillo excited. Cajuste moves very well for a player of his size. Although he sat out his first two seasons due to injury, he pointed out in his media availability after practice that he was taking mental reps and in meetings rooms even though he wasn’t participating on the field. Cajuste was a top offensive tackle prospect after a standout career at West Virginia, but injuries plagued him in college and are following him to the NFL. Now that he’s finally stringing some healthy days together, we see that potential on the field.