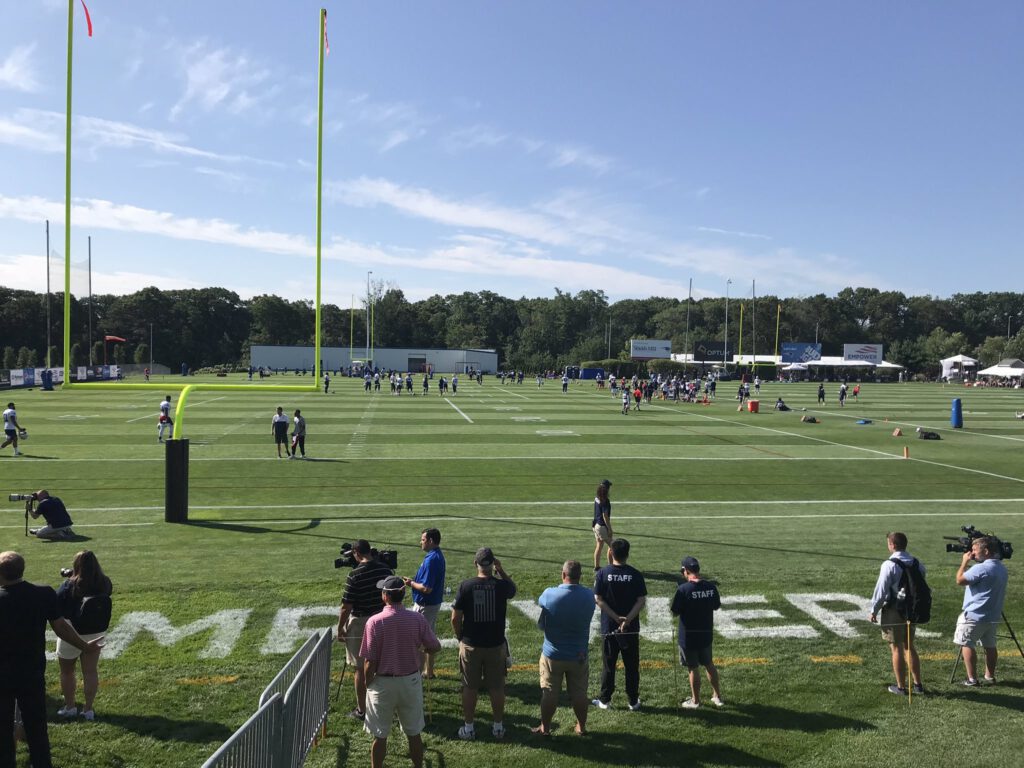 FOXBOROUGH — The first day of Patriots training camp is in the books, and the defending Super Bowl champs are happy to be back to work.

Although safety Devin McCourty said, “nobody likes training camp” yesterday, everyone was happy to be back on a football field today.

Bill Belichick ran his team through a similar practice format to minicamp in June with positional drills, situational red zone work and two 11 on 11 and seven on seven sessions.

There were a few notable absences including two surprises in starting center David Andrews and newly acquired veteran Michael Bennett.

Bennett, as he has for most of his career, skipped OTAs in the spring but was present for the Patriots’ three-day minicamp in June. Still, as a new player expected to play a significant role, his attendance is worth monitoring moving forward.

Along with Andrews and Bennett, Julian Edelman (broken thumb) was spotted at practice but did not participate as he’s currently on the non-football injury list.

And safety Patrick Chung was in a non-contact red jersey as he continues his recovery from a broken arm in the Patriots’ Super Bowl victory last February.

One of the major storylines for the Patriots this summer is the status of Isaiah Wynn, and the massive hole left by Trent Brown at left tackle. Wynn ran with the starters at left tackle during warmups and took part in positional drills, but sat out team drills with Joe Thuney taking his place (Ted Karras filled in at left guard). Wynn was moving well during positional drills practicing drive blocks and pass sets with his teammates, which is good news for his surgically repaired Achilles. We’ll see if things ramp up for Wynn during the team drill portions of practice once contact begins on Saturday.

As you’d expect, Harry was heavily involved in practice both during team drills and a few side sessions with Tom Brady and Josh McDaniels. Harry went one-on-one with McDaniels catching a series of back shoulder fades down by the goal line from Brady. Later on, Brady and Harry worked on quick-hitting passes to the outside. McDaniels had a few coaching tips for the Pats rookie but seemed pleased with what he saw. During team drills, Harry made the play of the day climbing over the back of a defensive back to snag a touchdown by the back pylon. He added another grab from Brady with a nice adjustment on a slant route. Harry’s ability to adjust to the ball in the air was impressive.

3. Is Danny Etling No Longer a Quarterback?

In a bit of a surprise, fourth-string quarterback Danny Etling was not in a non-contact red jersey at practice working out at wide receiver and on special teams. Etling wouldn’t say if his quarterback days are over, but we can read the writing on the wall after today’s developments and the fact that he barely threw a pass in minicamp last month. He’s extremely raw at receiver, as you’d expect, especially when it comes to setting up and executing his route breaks. I commend Etling for his willingness to change positions, but he’s a longshot to make the roster either at quarterback or in this new role.

Continuing a trend from minicamp, the former Pats linebacker was calling plays during team drills for the defense. After the departure of de facto DC Brian Flores, the expectation is that Belichick will call plays at least to start the season. But Mayo, like past assistants before him, is getting his shot to prove he can handle those responsibilities. Mayo wore the green dot as the on-field defensive play-caller during his playing days, so it’s not that crazy to think he can call plays.

We hear a lot about JC Jackson as the young stud corner on the Patriots roster, but Jon Jones stole day one. We already know Jones is fast and sticky in man coverage and today he got his hands on a few passes as well. In a loaded cornerback group, Jones is in competition with 2018 second-round pick Duke Dawson for reps in the slot. Some have theorized that the Pats could trade the 25-year-old who signed a one-year deal to return as a restricted free agent. If he continues to play this well, it’s going to be difficult to part ways with Jones.