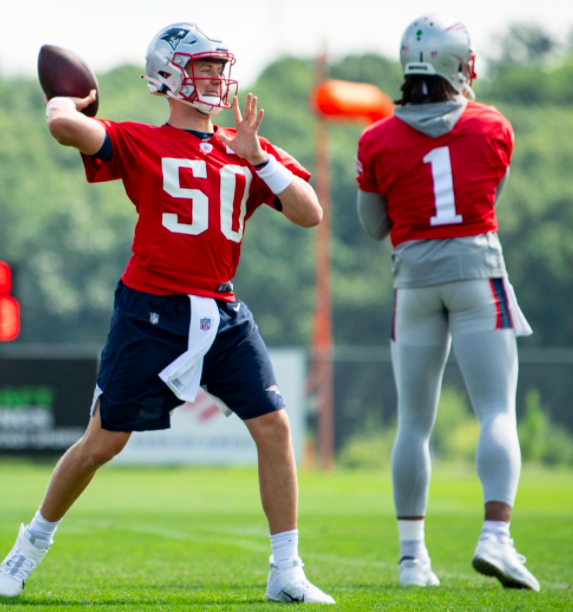 FOXBORO, MA — The Patriots practiced in full pads for the second consecutive day on the fields behind Gillette Stadium on Monday afternoon.

As the Pats began to turn up the intensity ahead of Thursday night’s preseason opener, head coach Bill Belichick ended practice with a critical element of the QB competition: situational football. This time, it was a two-minute drill where the offense needed six to win the game.

First up against the scout team defense was rookie quarterback Mac Jones. Jones marched the offense down the field with four straight completions to Sony Michel twice (wheel route, check down), an under route to Gunner Olszewski, and then capped it off with a perfectly placed back-shoulder fade to Marvin Hall.

Next, starter Cam Newton went against the starting defense. Newton threw completions to James White (check down) and Kristian Wilkerson (slant). However, Wilkerson dropped the next throw on a short stick route, and then safety Adrian Phillips continued his stellar training camp by breaking a pass up in the end zone intended for Jonnu Smith.

The caveat of starting defense versus scout-team defense is significant in the evaluation process, but we can compliment Jones without tearing Newton down.

Jones put together a great two-minute drill while throwing to Pats’ backups against Pats backups, which is good news regardless of who you favor in the QB competition.

First-round quarterbacks should be able to tear up the scout team defense, even with backup receivers, and Jones is doing just that.

Overall, Jones was 4-of-7 with a drop against the starting defense. For comparison, Newton went 6-of-12 with a drop and an interception versus the starters.

Let’s empty the notebook from day 11 of Patriots training camp:

There were a couple of great throws from Newton in Monday’s practice during team drills. First, Cam dropped a dime to James White on a wheel route with Kyle Van Noy in coverage (Wise would’ve sacked him, not his fault), got the ball out nicely to a wide-open Jonnu Smith up the seam (it wasn’t his first read), and threw a thoughtful pass to Kendrick Bourne to lead Bourne away from a big hit over the middle. However, Newton also threw behind Smith on an interception by Adrian Phillips and overthrew an open N’Keal Harry on a deep post pattern where Harry beat Michael Jackson. As we write every day, Newton’s overall process and accuracy are better than last year, but some moments leave you hoping for more.

Yes, Jones is taking reps against both starters and backup defenders, while the faces around him on offense change as well. Some people want to write off scout-team reps, and that’s fine. But the reality is that the Pats’ first-rounder looks the part. Outside of the two-minute drill highlighted above, Jones also made a terrific downfield throw to J.J. Taylor in 7-on-7 and flashed impressive pocket movement on a goal-line completion to Kendrick Wilkerson with Michael Jackson in coverage. Jones felt pressure off the edge and stepped up and out of the pocket to buy himself enough time to make the pass to Wilkerson. It was one of those subtle pocket movement plays we used to get excited over when the dude down in Tampa was here. In the two-minute drill, the back-shoulder fade to Marvin Hall was put on a platter for the receiver, as Jones routinely throws the ball where only his receiver can catch it. His downfield passes are accurate, thoughtful, and he’s starting to cut down on the interceptions. Even if Newton is the Week 1 starter, the hope is that we see more of Jones with starters/against starters soon. At some point, you have to see how he looks in extended reps against the starting defense.

New England’s revamped defensive line had its best padded practice of the summer with a decisive win over the offensive line. In goal-line work, the defense won three-out-of-four reps by stuffing Sony Michel twice and Damien Harris once (two TFLs by Nick Thurman). Later on, the top rotation on the defensive line of Guy, Godchaux, Wise, Anderson, Barmore, and Carl Davis was stout in run-game work between the 20s. Davis, who Belichick praised before practice, is coming on as a strong interior presence. He’s a difficult player to move off the ball and has good length to lockout while two-gapping. This is a really stout group, and we saw that on Monday.

4. DL Deatrich Wise Has Best Practice of Camp to Date

The Patriots saw the progress necessary to give Wise a four-year, $22 million deal in the offseason, which was surprising to some. On Monday, the Pats’ defensive end had his best practice of camp. Wise tossed tight end Jonnu Smith to the side and made a run stop in a drill early in practice. Then, he beat Isaiah Wynn clean with a rip move in one-on-ones and sacked Newton in 11-on-11s coming free on a stunt with Dont’a Hightower. Wise had a relatively quiet start to camp but is starting to flash in padded sessions. Monday was a good one for Wise.

The tally of all of Adrian Phillips’s interceptions and pass breakups on throws intended for the Pats’ tight ends is nearly a dozen. Phillips has challenged both Jonnu Smith and Hunter Henry. On Monday, Phillips intercepted a pass intended for Smith and broke up another one on a seam pattern in the end zone. After essentially playing linebacker for New England last season, Phillips is back to more of a strong safety role and a primary option on tight ends. As we know, Smith and Henry are two of the league’s best receiving tight ends, and Phillips is giving them problems in practice. The veterans’ ability to lock down tight ends would allow second-year safety Kyle Dugger to roam around the defense, which would be Dugger’s best usage. Phillips was a terrific free-agent signing by Belichick last offseason.

For those waiting for a sign of life from Taylor, we finally got one on Monday afternoon. During 7-on-7, Taylor made a great catch between two defenders on a wheel route from Jones. It was the first big play for Taylor, who some tabbed as the successor to James White, in the passing game. Although running backs coach Ivan Fears warned that Taylor was more of a game player than a practice player, the quiet summer where Taylor has worked mainly with the scout-team offense makes you wonder about his future. Would the Pats carry six running backs to keep Taylor rostered? Harris, Michel, White, Bolden, and Stevenson are making the team. Taylor is the sixth man there, and you also can’t forget about fullback Jakob Johnson. Stevenson might be a Foxboro Flu candidate based on Fears’s comments that he is way behind due to injury. Maybe that’s Taylor’s path onto the 53. It’s a numbers game, and Taylor needs to pop in the preseason games as a running back and returner (he is working with punt and kick returners in practice).

One of the top storylines of training camp is a different version of the 2019 first-round pick. Harry looks faster, more agile, and more confident on the field. He is having his best camp as a Patriot yet and had another solid practice on Monday. During one-on-ones, Harry ran a clean comeback route to beat Jalen Mills. In 11-on-11s, he blew by cornerback Michael Jackson on a deep post and should’ve scored (the ball was overthrown by Newton). The words “blew by” and “N’Keal Harry” in the same sentence, even against a depth CB like Jackson, is new. Still, you want to see Harry do it against J.C. Jackson or in a game.