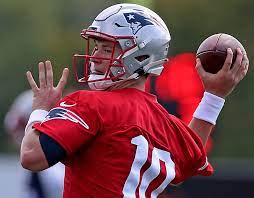 FOXBORO, MA — The Patriots and Giants held a two-hour joint practice on the training camp fields behind Gillette Stadium on Wednesday.

If there was going to be a moment in time where rookie quarterback Mac Jones solidified himself as the starting quarterback of the Patriots, it would look like late in Wednesday’s practice when the first-rounder dropped a 50-yard dime to wide receiver Jakobi Meyers.

Meyers aimed his route stem towards the post safety in the middle of the field, then broke outside on a deep corner route and went above two Giant defenders to grab a perfect ball.

Working against New York’s starters on defense, Jones was magnificent, completing over 80% of his passes in competitive 11-on-11 drills in his best practice as a Patriot to date (21-of-26).

There were impressive deep throws to Meyers and James White (back shoulder), command at the line of scrimmage, efficient quick-game plays, and anticipatory throws over the middle.

Yes, it’s only practice, but the tides are turning towards Jones, and the media isn’t the only one seeing that the rookie is the real deal (the key figures on the coaching staff see it too).

Assuming starting quarterback Cam Newton has heard of Wally Pipp, Jones is seizing the opportunity with Newton’s absence this week.

Let’s empty the notebook from the first day of joint practices between the Patriots and Giants:

Jones made another terrific downfield throw to White along the right sideline with the deep ball to Meyers. White was initially held up, then released down the sideline on a wheel pattern. Jones saw the linebacker playing over the top and put the ball perfectly on White’s back shoulder, and the Pats’ running back adjusted to make the catch. Another strong throw from Jones came earlier when he hit Meyers on a deep in-cut, throwing low and away from oncoming contact to protect his receiver. The lone blemish for Jones was an underthrown deep ball to Nelson Agholor, where Giants safety Xavier McKinney made a great recovery from a post-safety position to nearly intercept a deep corner route. The McKinney near-INT was the only throw that felt even close to a Giants defender most of the practice, and a string of 18-straight completions by Jones brought up one overarching question: “is Jones this good, or is the Giants defense bad?” We will find out if Jones can continue to play at this level on Thursday and Sunday’s preseason finale.

With starting running back Damien Harris leading off all drills as he has all summer, fourth-round pick Rhamondre Stevenson was the next man up with Michel now in LA. The Patriots are showing their faith in Stevenson by dealing Michel, making the rookie the top backup to Harris in the early-down back role. There’s good reason to believe in Stevenson’s talent. He leads all ball carriers with 140 yards after contact and 12 forced missed tackles in the preseason. Plus, the Oklahoma product had a nice blitz pickup in Wednesday’s practice that highlighted his strengths in a critical area of the game for Patriots running backs. Harris will get the lion’s share of the carries this season, but Stevenson is trending towards the rare running back in New England who makes an impact in his first season with the team.

The Pats defense also won the day in the first joint practice session. Starting quarterback Daniel Jones had more scrambles (three) than completions of ten-plus yards in the air (two), while New England’s pass-rush was extremely effective. On several occasions, Jones was forced off his spot by unblocked blitzers, as the Giants struggled all morning to pick up multiple pressure looks by the Patriots. I counted at least four free runs at the QB for Dont’a Hightower (two), Kyle Van Noy, and Chase Winovich. At times, it felt like the Giants’ linemen had no idea where the Pats’ rushers were coming from, which was probably a beautiful sight to head coach Bill Belichick. Belichick’s defenses are at their best when they’re confusing the opposition, and Jones struggled to read downfield coverage while the O-Line couldn’t find the pass rushers.

Another notable development in Wednesday’s practice was an increased workload for Olszewski and Cajuste. With N’Keal Harry’s absence and Nelson Agholor’s early departure, the Patriots turned to Olszewski to work with the starting offense. He caught two passes from Jones in 11-on-11s, including a touchdown near the goal line on the Pats’ juke series (in-cut). Olszewski’s separation skills at the top of routes are improving, and Jones is working efficiently with him on those option-style patterns. As for Cajuste, starting left tackle Isaiah Wynn left practice early, which opened the door for the third-year tackle to rep with the starting O-Line. Cajuste is making a strong impression in joint practices and last Thursday night’s preseason victory over the Eagles. There’s good reason now to think Cajuste will make the 53-man roster.

After catching six of seven targets in Tuesday’s practice, Meyers caught four more balls against the Giants defense and drew a defensive holding penalty. Meyers’s quickness and intelligence running routes are his hallmarks, but he’s flashing excellent high-point skills down the field this summer. The Pats wideout has strong hands at the catch point, making fighting through contact and elevating above the defense look natural.

The Patriots’ offensive line found themselves in a legitimate scrap with the Giants’ pass rushers on one side of the field after a fight broke out and caused a giant pile-up. But on the other side of the field, rookie Christian Barmore dusted the Giants’ interior line with inside counters, while Chase Winovich’s speed rush was too much for New York’s tackles. Both Barmore and Winovich shine when they’re rushing the passer.