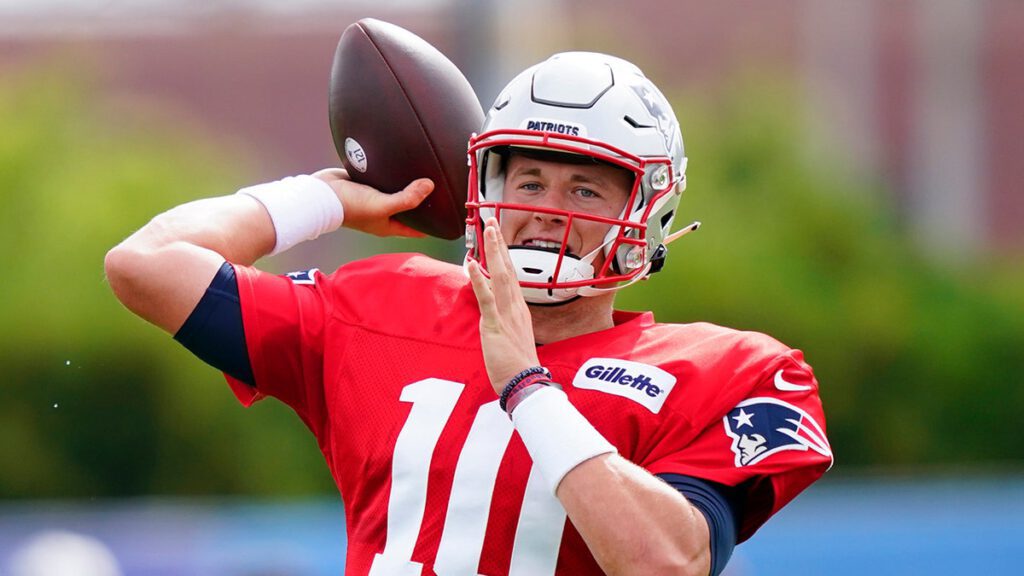 FOXBORO, MA — The Patriots held a two-hour practice session on the training camp fields behind Gillette Stadium in shorts and shells on Tuesday morning.

With joint practices with the Giants on the horizon, one would expect a lighter day, which it was in terms of equipment (not full pads), but there was still a good pace to practice.

Newton is now in a five-day re-entry COVID protocol following a medical appointment outside the New England area that will hold him out of practice through Wednesday. According to Mike Giardi of NFL Network, there is a level of “frustration” with Newton’s situation, and the slip-up by the veteran quarterback “opened” a window of opportunity for Mac Jones.

Over the last two practices without Newton, Jones has dominated the first-team reps.

Belichick confirmed that Newton should return for the second day of joint practices with the Giants on Thursday. Still, the Pats’ head coach agreed that Newton is at a competitive disadvantage by missing practice and that this week will be a good opportunity for Jones.

“Yeah, of course,” Belichick responded to a question about Newton missing practice putting him at a disadvantage. “If you couldn’t gain anything by practicing, then why would we practice?”

Newton’s reluctance to get the COVID-19 vaccine forces him to follow strict NFL-NFLPA protocols that mostly don’t exist for vaccinated players.

Although Newton won’t lose the starting job solely because he’s unvaccinated, it’ll be a factor, and it doesn’t take much for a promising young player to take a veterans’ spot in the NFL.

In attendance, the Patriots must trim their roster down to 80 players by 4 pm eastern on Tuesday, and there happened to be five players missing from the session. Four of those are confirmed cuts: WR Devin Ross, OL R.J. Prince, LS Brian Khoury, and DB Malik Gant. OL Marcus Martin also wasn’t at practice, which could be the fifth cut to get down to 80.

Let’s empty the notebook from day 17 of Patriots training camp in Foxboro:

After a shaky practice on Monday, first-round pick Mac Jones was much better today. Jones finished the session 29-of-34 with two interceptions in competitive 11-on-11s. He had a highlight throw to Jakobi Meyers, where the Pats’ rookie dropped a dime to Meyers on a slot fade from about 20 yards out with Jon Jones in tight coverage. The pass got a massive cheer from the entire offense and OC Josh McDaniels. Along with the dime to Meyers, Jones threw “hot” on two separate occasions, reading the pressure out quickly. On the first “hot” read, Jones knew his line was blocking down, and there would be an unblocked rusher on the backside if the defense blitzed. He read the blitz and got the ball out quickly to Sony Michel in the flat before Josh Uche could touch him. The second “hot” throw was to James White in the flat when Dont’a Hightower came through the middle of the line unblocked, and Kyle Van Noy dropped in coverage on the back. Jones knew his O-Line wasn’t accounting for Hightower and that White was releasing on a route, so he beat the unblocked rusher with his arm. On the two interceptions, the first pass was late and behind Gunner Olszewski, leading to a deflection into the hands of Devin McCourty. It looked like Jones held on Jonnu Smith’s route for an extra beat, but Smith didn’t go where Jones was expecting, and the rookie then went to Gunner. The second pick was more on Olszewski. Jones needed to get rid of the ball, and J.C. Jackson beat Gunner to the spot. Overall, Jones was sharp working against the starting defense and in a situation-heavy practice (two-minute, third down, red zone, etc.). The interceptions put a bit of a damper on things, but stacking together practices like that one will help Jones gain ground on Newton.

On Jones’s final throw in Monday’s practice, wide receiver Gunner beat Jackson to the inside on a goal-line slant. However, Jackson returned the favor by driving hard on the same slant pattern and beating Olszewski to the spot for an interception on Tuesday, “I knew I couldn’t get beat by the same route,” Jackson told me. The Pats’ CB also picked off Brian Hoyer when he replaced the post safety in coverage and tracked down a deep ball by Hoyer intended for fullback Jakob Johnson up the seam. Jackson’s ability to read the quarterback/receiver and finish plays with terrific ball skills was on full display.

After a quiet practice yesterday, wide receiver Jakobi Meyers caught six of his seven targets from Mac Jones on Tuesday. The big play was the slot fade mentioned earlier, but Meyers also ran a terrific delayed slant where he paused at the top of his route to let the vertical route clear out space and then exploded through the cut into the end zone. Plus, Meyers was wide-open on a deep crossing route that would’ve been six on the lone incompletion, but Jones overthrew it. Meyers continues to stand out this summer as the Pats’ most consistent pass-catcher. Nelson Agholor and Jonnu Smith might have flashier plays, but Meyers is currently the straw that stirs the drink.

If there were any concerns about Smith’s sore ankle, he has put those to bed over the last two practices. The Pats’ tight end is making catches all over the field, including a leaping grab with Adrian Phillips in tight coverage on a good ball from Mac. Smith is extremely impressive, and it’ll be fun to see him against another defense over the next two days.

The free-agent additions performance at the start of camp was worrisome, especially as an outside corner. But he is turning it on now, probably due to a growing comfortability with the defense, and forced two incompletions in coverage on Tuesday. On a throw intended for Kristian Wilkerson, Mills nearly came up with an interception when Wilkerson cut inside instead of outside, where Jones was expecting his wideout to go. Mills was way out of bounds, but he made a good read and was in position. He also covered Kendrick Bourne well on a goal-line fade.

At the end of practice, the Patriots had rookie kicker Quinn Nordin attempt five kicks on the narrow goalposts. The narrow posts are about half as wide as regular goalposts, but three of the kicks weren’t close. Veteran Nick Folk spoke after practice, which is usually an indication that a player is healthy. Still, the Pats’ kicker situation is suddenly iffy.

7. Do the Patriots Miss WR N’Keal Harry’s Size in the Red Zone?

Look, I’m still not all the way sold on N’Keal Harry’s breakout on the practice field before his shoulder injury. Yes, he was practicing significantly better than before. But it still needs to come together in the regular season to make me a believer. With that said, the Pats are noticeably missing Harry’s size on the outside near the end zone over the last two days. Jones attempted high-point fades for Nelson Agholor and Kendrick Bourne in the last two practices that weren’t close. And the Jackson interception on the slant to Gunner, where Gunner was muscled off the spot by J.C., might not happen if the receiver is 6-3, 210 instead of 5-10, 190. Whether or not Harry is making real progress remains to be seen, but he’s the only big-bodied wide receiver on the roster.