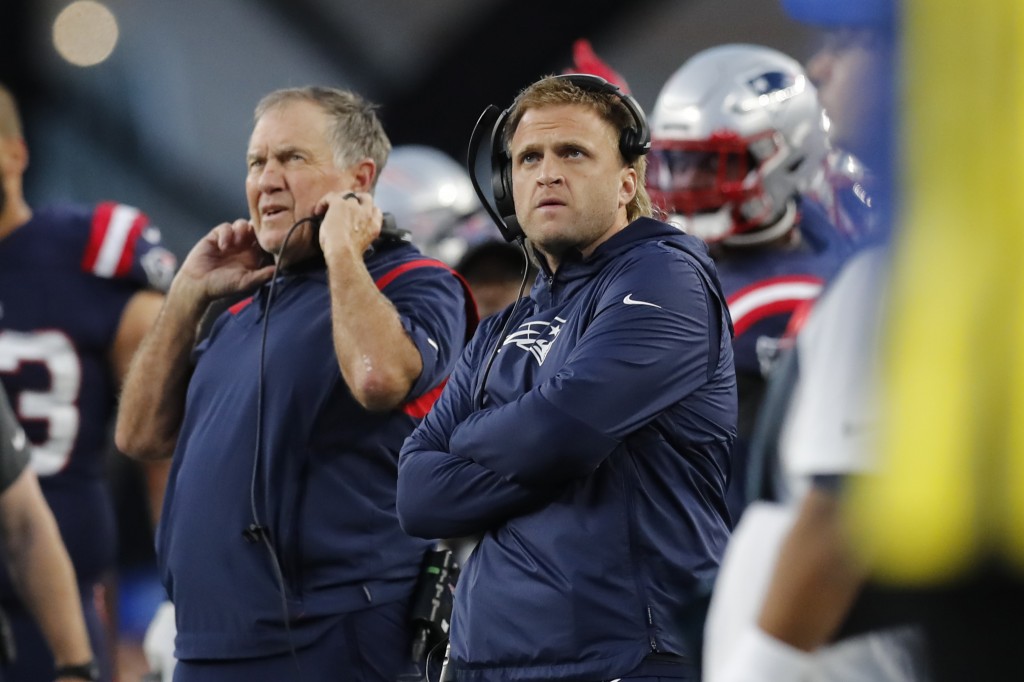 We wrote about Belichick’s slow turn to loss aversion on offense over the years this week. Although those criticisms need to be said, New England’s defense also had a few head-scratching play-calls at the end of Sunday’s loss to the Cowboys in overtime.

In fairness to the Pats’ defensive personnel, they were on the field for 92 plays, including penalties against one of the NFL’s best offenses.

Still, there were two instances where defensive play-caller Steve Belichick had the defense in a way too aggressive coverage given the situation and offensive formation.

Let’s start with the poor situational play-calling on a 24-yard completion on 3rd-and-25 that got Dallas into field goal range to send the game to overtime.

The Patriots are in their one cross coverage where Adrian Phillips (robber) will cut the underneath crosser from the X receiver, and J.C. Jackson will replace Phillips as the robber in the middle of the field. Jackson should take the most dangerous route on the outside dig by CeeDee Lamb but gets hung up on the tight end route (Dugger has good coverage), and it leaves Jalen Mills out-leveraged without help in the middle of the field.

Blaming player execution (Jackson) for being in the wrong spot is factual but a little unfair.

The Cowboys need 20-plus yards to get into Greg Zuerlein’s range, and one cross is an aggressive call that leaves DBs in man coverage with the deep middle vulnerable if JC-Phillips exchange goes poorly. Plus, Cooper’s shallow cross isn’t a threat to get Dallas into field goal range.

In that situation, a simple cover-three or quarters (cover-four) zone would force a throw underneath that doesn’t hurt the Patriots there.

Over my four years breaking down Pats film, I don’t recall New England ever calling one-cross in such a situation. It’s usually an early-down call against teams that run heavy crossers or a shorter-yardage third down where the shallow cross is dangerous.

On a third-and-25 where Cooper’s shallow is a non-threat? Never seen it.

The other obvious head-scratcher was the zero blitz on the final play of the game in overtime. In defense of the call, a field goal beats you there, so the thought process was likely that they were protecting a field goal like it’s the goal line.

My gripe with the call might be more with the signal callers on the field (Hightower or McCourty) than the coaching staff. 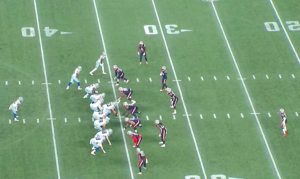 The Cowboys come out in a condensed formation from under center. The condensed set forces the Pats’ corners to play outside leverage on the wide receivers. There’s no other way to do it. Plus, with Dak under-center, it’s likely play-action if it’s a pass, or, even worse, bootleg action that moves the pocket away from the rush and holds the D-Line in their gaps. It was doomed from the start.

As we roll the play, it’s bootleg action with Lamb on a deep over route against an out-leveraged Mills. A zero blitz gets zero pressure because the play-action holds the four D-Linemen, and Judon has to contain the bootleg, leaving Adrian Phillips as the lone rusher who has a chance to apply pressure on Dak (and he gets caught in no man’s land in the flat). Mills didn’t stand a chance.

The Patriots’ defense competed hard on Dallas’s first six drives of the game, and you can’t fault them for getting beat sometimes against the Cowboys’ weapon or running out of gas.

But there were too many instances where the pass-rush was ineffective, secondary players were out of position in various coverages, and the play-calling let them down in the end.

New England’s defense needs to improve late in games for the Pats to turn their season around.

Let’s empty the rest of the notebook as we head into Week 7:

1. Pats DB Kyle Dugger Has His Best Coverage Performance Yet

One of the bright spots in the Pats’ secondary was safety Kyle Dugger, who had several good man coverage reps against Cowboys TE Dalton Schultz, closed in a hurry on a throw into the flat in zone, and had his first career interception.

On the pick, Dugger executes his assignment in a “cone” bracket perfectly to peel off Schultz once he breaks inside and finds the football. He was also in phase with Schultz on the third-and-25 play above. Hopefully, this is a sign that Dugger is turning the corner in coverage.

Another positive development for the Patriots offense is that rookie running back Rhamondre Stevenson looks like a factor in the passing game. Stevenson caught all three of his targets, making Cowboys linebacker Leighton Vander Esch whiff in the flat and hauling in a 22-yard reception up the seam. In pass protection, Stevenson had two snaps.

The one real rep wasn’t pretty. Ideally, Stevenson would stay upright and get his eyes outside to pick up the blitzer. But the pressure on Jones was more on tight end Hunter Henry than Stevenson. Stevenson’s impact as a pass-catcher is hugely valuable, especially compared to what Brandon Bolden brings to the table as a receiver.

3. Why has LT Isaiah Wynn’s Performance Dropped-Off This Season?

Let’s get an obvious statement out of the way: Isaiah Wynn is an undersized offensive tackle. And one more obvious statement: playing a game without practicing all week after testing positive for COVID the week before is difficult. Still, Wynn has always needed an aggressive approach in pass protection. Unlike, let’s say, Trent Brown, Wynn doesn’t have the size to “catch” pass-rushers. He needs to go out and get them.

On Randy Gregory’s second sack, Wynn sits back with his hands down before firing them essentially simultaneously with Gregory’s punch. As the longer player with forward momentum, Gregory bullies Wynn on the bull rush to sack Jones on third down.

Along with typically smooth footwork, Wynn’s best asset as a pass protector is his grip strength and punch power. The Pats need the aggressive Isaiah Wynn back.

4. Can the Pats Get TE Jonnu Smith Going in the Passing Game?

Over the last two games, Smith has only run a pass route on 30.5% of the Pats’ passing plays. Look, there’s more to playing the tight end position than running routes and catching passes. But the Patriots didn’t pay Jonnu Smith $31 million guaranteed to be a blocking tight end. Some of the concepts they ran where Smith was a decoy out of the backfield were effective. Still, they have to find ways to scheme him into space as a ball carrier more often. Smith isn’t a traditional receiver that wins with precise routes; he’s more gadget player than Hunter Henry. With that in mind, I like the idea of using Smith similarly to Cordarralle Patterson in 2018. Schemed touches behind the line of scrimmage or out of the backfield, pick plays to create downfield separation, seam runs, and other avenues to get Jonnu rolling downhill. McDaniels needs to find ways to get more out of the investment.