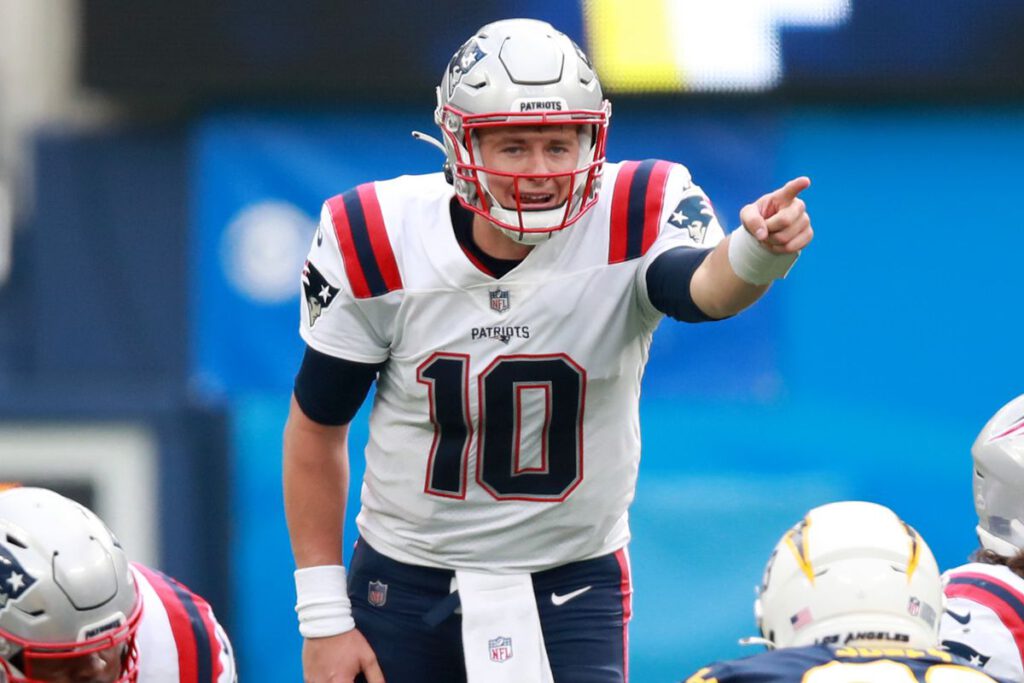 Patriots rookie Mac Jones didn’t have his best performance against the Chargers in Week 8.

Jones had a season-low 61.3 on-target rate while we had him down with three “missed” reads, and it was confirmed in film review that the pass rush sped up Mac’s process at times.

However, a look at the coaches tape shows Mac hit most of the layups, didn’t make the fatal errors that Chargers quarterback Justin Herbert did, and made high-level plays when the opportunities presented themselves.

On New England’s opening drive, Jones put the Pats in scoring territory with his longest air-yard completion of the season (37 yards) on a 44-yarder to Nelson Agholor.

In the play, the Pats get a single-high safety structure with the Chargers matching vertical routes. Jones recognizes that Derwin James, who typically plays in the box, rotated into the post-safety position. In his drop, Mac looks off James by opening to the left while keeping his eyes in that direction, getting James to commit his hips in that direction. Then, Mac comes back to Agholor on the deep crosser and makes the big-time throw.

Later on, the Patriots were facing a third-and-9 from midfield, and Jones connected with Jakobi Meyers to move the chains.

New England runs a double-in concept against another single-high look putting the post-safety in conflict. He can either help the first in-breaker (Hunter Henry) or move in the passing lane for Meyers’s route, but he’s leaving someone one-on-one. Jones waits for Henry to clear out the safety help, then throws a dart to Meyers.

Lastly, on the Patriots’ seven-minute drive in the fourth quarter, Mac completed all four of his passes for 42 yards to get the Pats in field goal range to put the game on ice.

With the Chargers expecting New England to run the ball, offensive coordinator Josh McDaniels dials up play-action on two plays in a three-play sequence for gains of 17 and 15 yards.

On the first completion to Meyers, Jones sells the play-action fake, the scheme gets the linebacker level to step up into their run gaps, and Jones makes the layup throw to Meyers.

Two plays later, the Chargers’ linebackers stay back to take away the crossing route by Meyers, but the corners on the outside bail off the line. N’Keal Harry reads the bailing corner, runs a deep comeback route, and Mac hits him with the throw as he’s coming out of his break.

The only instance where Jones’s inconsistent play against Los Angeles really cost them was the Patriots’ first red-zone play following a 33-yard completion to Hunter Henry.

New England attacks LA’s coverage rules at the top of the screen out of a stack alignment at the top of the screen. Kendrick Bourne runs a return route, where he gets the defender over him to commit to an outside break and then cuts back inside for what should’ve been an easy TD. However, Mac doesn’t step into the throw, passing out of a narrow base, and the ball sails on him.

As is often the case, the lamenting about Josh McDaniels’ play-calling at times often wouldn’t exist if player execution was better on the field. No, Jones throwing an errant pass on first down doesn’t excuse McDaniels for throwing a fourth-down fade to Jakobi Meyers later on the drive. But that situation could’ve been avoided if Mac made a good throw to Bourne.

The Patriots will happily live with some of the growing pains for Jones if he’s taking care of the football, hitting the majority of the easy ones, and adding value on deep throws and third down.

Although Jones wasn’t always sharp against the Chargers, he checked all of those boxes.

Let’s empty the rest of the notebook from our Week 8 film review of Pats-Chargers:

Although the Mac-to-Nelly connection only hit on one deep throw, Agholor was threatening the Chargers’ defense in the deep part of the field all afternoon long. We already highlighted the 44-yarder on the Pats’ opening drive, but Agholor had a step on a few other go balls as well.

Here, Agholor uses a one-step stretch release to open an inside pathway upfield to get behind the defense and then fade back into the boundary as he works to stack the defender. However, at around the 20-yard line, Agholor flattens his route path and heads in more of a straight line. Jones throws the football towards the back pylon because he expects Agholor to keep fading into the end zone. Regardless of right or wrong, Agholor and Jones need to get on the same page. There’s an opportunity there for a long touchdown, but the ball is off-target because the two guys aren’t in sync (Mac thinks fade, Agholor thinks go).

Once they clean that up, the success rate on deep throws to Agholor will increase. He’s getting open.

Los Angeles’s 32nd-ranked run defense held the Patriots to 3.6 yards per rush on 39 carries. Not great. Two holding calls wiped out a 28-yard touchdown run and a 23-yarder by Damien Harris, which would’ve helped those numbers out a lot.

Along with the holding calls, the Chargers’ early-penetrators gave the Patriots downhill/gap schemes issues. LA shot gaps and used arm over moves to get defenders in the backfield, forcing lead-blockers to take the “first color” rather than get up to the linebacker level.

Here, #98 Linval Joseph swims center David Andrews on a counter-lead scheme to get into the backfield, forcing fullback Jakob Johnson to block Joseph rather than leading up through the hole. The Chargers have the numbers to the play side now, and it’s a short gain.

The Patriots seemed to succeed with duo schemes against the Chargers because those plays don’t take as long to develop as schemes with pullers and lead blockers.

New England has a unique player in second-year defensive back, Myles Bryant. Bryant’s size always stands out when people discuss what he can’t do. But what he can do is make plays and take on a ton of responsibility — blitzer, short zone defender, deep zone defender, man coverage. Bryant played five different coverage techniques in Sunday’s game and registered a QB hit on a slot blitz. Game plan to game plan, down-to-down, Bryant gives the game what it needs.

Here we go again, driving the N’Keal Harry hype train. The routes are crisper, he’s more explosive and decisive in his breaks. Essentially, he looks like the player we saw in camp.

I haven’t seen Harry ever get out of a break on a deep comeback route as well as he did on the play we highlighted in the opening section, and he did a great job of holding his line working across the field and boxing out the catch point on his first catch.

Are these signs that Harry will break out into the first-round pick the Patriots thought they drafted? Let’s not go that far. But at least he gives them a fourth receiver who can make plays.

Another player that stood out in film review was second-year linebacker Josh Uche. Uche registered two hurries as a pass-rusher, but his athleticism on the end of the line in coverage flashed the most.

In this play, the Chargers throw a wide receiver screen to Uche’s side. He does a great job of anticipating the pass, eludes the blocker, and makes the stop. The Pats don’t have a lot of linebackers that make athletic plays like that regularly.

Uche’s role is set as a passing downs player. Still, his speed and athleticism are impressive.