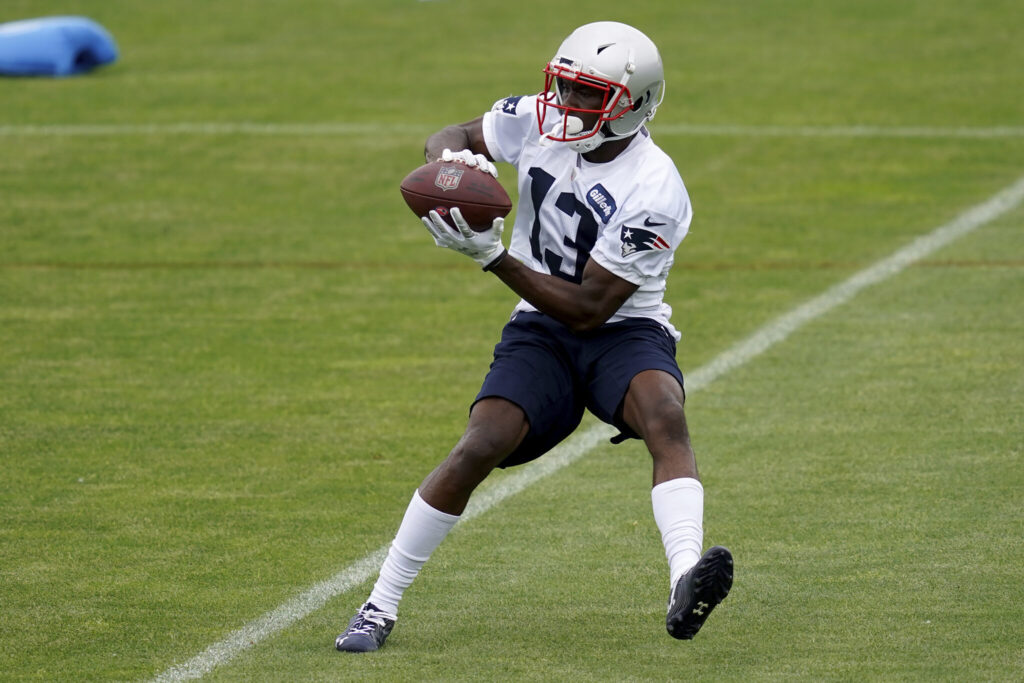 FOXBORO, MA — The Patriots held their third training camp practice on the field behind Gillette Stadium on Friday morning.

After the edge went to the defense on the first two days, the offense had its best camp practice to date with both quarterbacks, Cam Newton and Mac Jones, making competitive throws.

Newton and Jones made the Patriots’ backup defense look like Alabama vs. Appalachian State at times, with Newton connecting on a deep crosser to Nelson Agholor and Jones riffling a dart up the seam to Gunner Olszewski. It was varsity versus JV at that point.

Later on, the intensity ramped up when the starting offense competed against the starting defense in 11-on-11s and four-on-fours that were the most competitive camp periods yet.

The biggest takeaway, and the best news out of practice, was that the free-agent additions on offense showed up in a big way on Friday and lived up to those hefty contracts.

Agholor was the player of the day with several catches, including a deep ball, a nifty route on Adrian Phillips, and a leaping grab on a dart from Newton with J.C. Jackson in coverage.

Along with Agholor, both Hunter Henry and Jonnu Smith practiced well. The tight end duo had back-to-back highlight-reel grabs in four-on-fours over Devin McCourty. Smith also caught a shallow crosser from Newton, where we were able to see the explosiveness in the open field.

Between Agholor, Henry, Smith, and one of the most consistent practice players, Kendrick Bourne, the Patriots’ new additions on offense are making a strong first impression.

Rookie running back Rhamondre Stevenson returned to practice, signaling he is off the non-football injury list. The rest of the Pats’ absences remain the same as the first two days.

Newton is starting to figure it out. His timing in the offense is improving, and Cam has now stacked together two good practices back to back. In all, he was 14-of-20 in competitive team drills. Newton connected on a deep crossing route with Nelson Agholor, hit Jonnu Smith in stride on an underneath crosser to lead him into YAC, and dropped it in the bucket to Gunner Olszewski with Jon Jones in coverage. Similar to a pass yesterday to running back Brandon Bolden, the throw to Gunner was an example of anticipatory completions with good touch and accuracy. There are still times where Cam holds the ball too long, but he has found more of a rhythm the last two days. It’s way too early for any major proclamations, but if this momentum for Newton continues, it’s harder to envision Jones starting over him in Week 1.

There is plenty to like about Jones’s start to camp, and he has done nothing to concern you about the first-round selection. He makes quick, decisive decisions and throws a great ball. Due to his snappy release, the ball gets on receivers faster than draft pundits said. He made a pretty in-rhythm throw to a crossing Kendrick Bourne that fell in the bucket and finished practice with a perfectly thrown dart to Bourne on a “shake” route in the back of the end zone. However, he finished practice 8-of-18 and took a few sacks. He was edged out by Newton once again. What I see from Mac on his incompletions is constant tinkering with ball placement. Jones was chatting with his receivers after errant throws on more than one occasion. Mainly, he wasn’t on the same page as Nelson Agholor on two plays. The rookie made an easy deep ball tougher on his receiver when Agholor had to contort his body to track the ball over his shoulder. After the play, Jones discussed Agholor’s route path with the Pats’ wideout to better understand where to place the ball. On his last throw of practice, Agholor stopped his route when Jones expected him to continue on a slant, and Mike Jackson broke up the pass. The quarterback and receiver then spent some extra time after practice discussing route details. These are correctable errors with more reps, and Jones is getting as many as Newton with the key figures on offense. Still, the early edge in the competition goes to the veteran.

Agholor was a problem for the Patriots’ secondary on Friday. As one would hope, he was effortlessly gliding behind the second-team defense early in practice and then made a few great grabs in red-zone work against the 1s. One of those plays was a leaping catch with J.C. Jackson in the area that was one of the highlights of practice. He also dusted Adrian Phillips in the red zone for another touchdown. Agholor creates consistent separation on the Pats’ DBs and is by far the most explosive receiver on New England’s offense. He will drop some passes this season, but he’s a dynamic receiver who can stretch the field. Agholor’s red zone work is better than anticipated as well. Not to be too hyperbolic, but this was the best camp practice by a Pats wide receiver I’ve seen in a while. The Pats were awful at the position last year, but Agholor was also really good.

The Patriots’ TE(A) party is already humming through three camp practices. As we mentioned earlier, both Henry and Smith went over Devin McCourty for high-point grabs, and we saw Smith rolling in the open field on one occasion. The Pats will call a million shallow crossers for Smith off play-action to give him voids of space to run after the catch. If it were live tackling, Smith probably would’ve scored on a crosser in today’s practice after getting free and taking off down the right sideline. Even in these non-contact sessions, Smith’s explosiveness after the catch stands out. With Henry, my mind immediately goes to Greg Olsen whenever Newton connects with him between the numbers. Things are already looking significantly better offensively.

My focus was on second-year safety Kyle Dugger during another pass-heavy practice on Friday. Early on, Dugger was still having some issues with his footwork and route anticipation at the break point. He gets stuck in neutral at times, which causes him to give away an NFL-sized window, and that’s all it takes. He was tracking Devin Ross up the seam and got beat despite having safety help and inside leverage. Then, Matt LaCosse got him. The positives did come eventually, though, with Dugger breaking up passes intended for Ross and LaCosse later in practice, but the Ross PBU came in zone coverage. Dugger came down from depth to jump an underneath crosser by Ross, making a nice play to see Ross coming and beat him to the spot. We can’t properly assess any of these players, especially physical marvels like Dugger, until the pads come on next week. But Dugger can be best described as up and down in coverage so far.

Although sacking quarterbacks in practice is a different animal than in games, there were three “sacks” in today’s practice. Two of them were with Jones at quarterback, one with Newton. In particular, Adams’s burst through the middle of the pocket stood out as a legit practice sack. Adams has some explosiveness off the ball and could provide an interior pass-rush presence with the team replacing Adam Butler this season. With Byron Cowart on the physically unable to perform list, there’s plenty of opportunity for Adams. Uche also recorded a sack and batted a pass down at the line. The second-year linebacker is off to a great start in 2021.