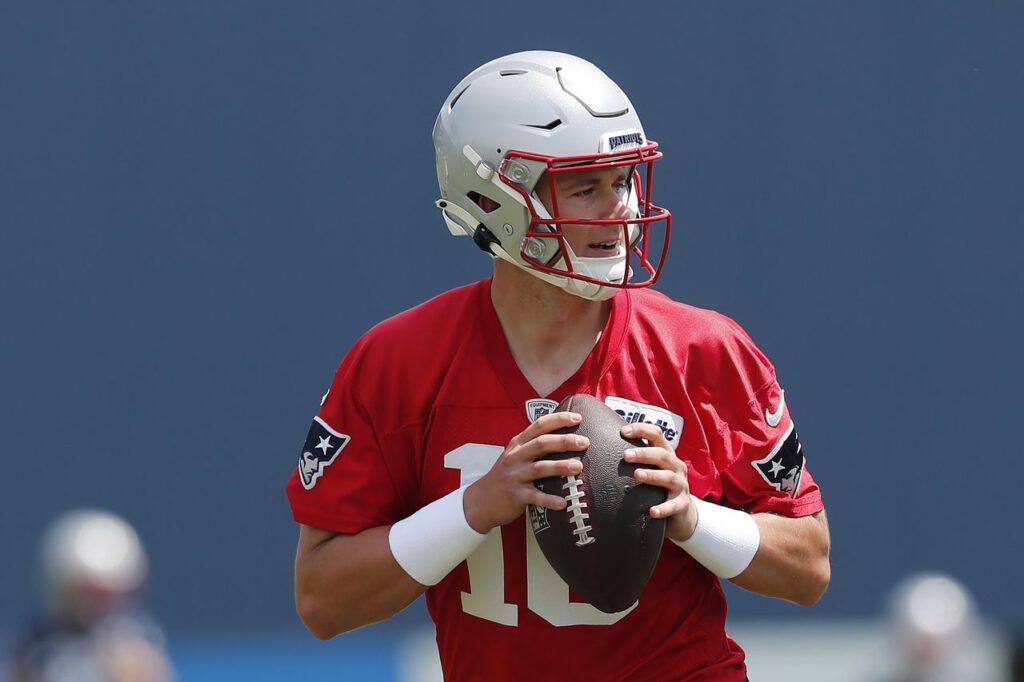 FOXBORO, MA – The Patriots held their first of three minicamp practices on the fields behind Gillette Stadium on Tuesday afternoon.

As was the theme throughout the spring, head coach Bill Belichick fielded questions about “streamlined” terminology for the Patriots’ offense under top offensive assistants Joe Judge and Matt Patricia.

Although Belichick wouldn’t divulge the extent to which the Patriots are shifting their scheme, he did acknowledge a more efficient language was an offseason priority, similar to a shift the team made defensively in 2019.

New England’s offensive terminology is one of the most complex languages in pro football, which has led to issues integrating rookie and veteran receivers alike. Cleaning up the complexities and making the offensive language easier to learn is a welcomed change. The Patriots internally are downplaying the scheme changes, but on the field, New England’s offense sounds and looks different with an increase in zone-blocking schemes all spring long.

With nearly the entire 90-man roster in attendance, it’s safe to say this is more than just experimenting for the Patriots’ offense at this point.

The Patriots had one notable absence among their core group, with wide receiver Kendrick Bourne missing from practice. Belichick said before practice that the team had a few excused absences, so Bourne could be among them. Byron Cowart, rookies Andrew Stueber and Chasen Hines, and kickers Nick Folk and Quinn Nordin were also not spotted. After offseason surgery on both shoulders, rookie corner Marcus Jones was in a red non-contact jersey. Veteran running back James White was present but did not participate.

Here are ten takeaways from the two-hour practice session for the Patriots on day one of mandatory minicamp:

The Patriots put the offense in Judge and Patricia’s hands under the watchful eye of Bill Belichick once again. But Patricia took on a leading, inserting himself into the offensive huddle to relay the plays. In practice, plays are scripted to work on certain things the coaching staff deems important. It’s not like calling plays during games, but Patricia was relaying plays through a small walkie-talkie. Belichick worked closely with the running backs and quarterbacks on route-running early on, even snapping the football a few times to Mac Jones. Belichick spent most of the practice with the offense, as he did during OTAs.

The best news coming out of spring practices for the Patriots is consistent excellence from their second-year quarterback. Jones is more in command, spraying the ball all over the field, and looks like he’s in terrific shape. At one point, Jones had a string of 23-straight completions, including deep throws to Tre Nixon, Jonnu Smith, and DeVante Parker during team drills. On the throw to Nixon, the Pats wideout faked a post route and ran a deep corner pattern to break away from Jon Jones and Devin McCourty. The throw, which dropped perfectly into Nixon’s hands, was a dime with plenty of zip to fit it between two defenders. Although it was a non-contact setting, Tuesday was one of the best practices I’ve ever seen by Jones.

Patriots fifth-year tackle Isaiah Wynn was a full participant in Tuesday’s practice, reporting to Gillette Stadium for the first time this spring. After four seasons at left tackle, Wynn worked at right tackle with Trent Brown at left tackle in limited reps on Tuesday. In a non-contact practice, it’s difficult to evaluate the offensive and defensive linemen. But Brown continues to play on the left side, as he did in OTAs, which means that could be the setup we see to start the season. From left to right: Brown, Strange, Andrews, Ownenu, and Wynn.

When the defense broke the huddle for the first time on Tuesday, incumbent starter Jalen Mills and Terrance Mitchel were the outside corners. Mills had some battles with DeVante Parker and N’Keal Harry, with Parker getting the best of him and a pass breakup on Harry. Mitchell wasn’t targeted much but was on the field for a few coverage “sacks” with top defenders. Malcolm Butler also worked in at times, while Jonathan Jones was the top option in the slot.

After a strong showing in two open OTAs, new Pats wideout DeVante Parker continued to make plays on Tuesday. In one rep during 7-on-7s, Parker showed off the exact reason why the Patriots made the trade to acquire him, catching a high-point fade from Mac Jones over Jalen Mills for a big play down the sideline. Parker’s ability to make contested catches and run crisp intermediate routes is showing up consistently this spring.

In the interest of full disclosure, Smith had flashes early last summer at practice as well. But this feels a little different since it’s more about Smith’s confidence in the offense than the plays he’s making. The Pats tight end made a nice catch on a corner route from an in-line alignment with Joshuah Bledsoe and Adrian Phillips in coverage. He then was exactly where Jones expected when he sat down between two zone defenders after a vertical route by Nelson Agholor cleared out the coverage. Jones hit his back foot, Smith turned around, and there was the ball. Although Smith flashed his athleticism at times last year, he’s playing a crisper game so far, thanks to a year in the system and full participation in the offseason program.

Thornton is still mostly repping with the two’s during team drills, but he was more involved than during the OTA practices. The speedy wideout can certainly clear out coverage, and he was targeted a few times on underneath drag routes to give him chances to run with the football.

As for Strange, the Pats rookie took exception to physical coverage on Nelson Agholor in a non-contact setting, which resulted in the ball hitting the ground. Pats linebacker Matthew Judon picked up the ball, and Strange appeared to tackle him. Strange had to be walked back from the scrum by teammates, and Belichick sent everyone to the hills for conditioning to end the practice. If you’re into comparing strange to Logan Mankins, that was a Mankins-like moment.

8. Pats WR Tre Nixon a Dark-Horse to Make the Roster

Before Mac Jones began regularly working with the starting offense last summer, an early connection developed with 2021 seventh-rounder Tre Nixon (yes, the Ernie Adams pick). This spring, Nixon is making a strong impression working out of the slot. He has good wiggle underneath the defense and legitimate straight-line speed to stretch the field from the slot. Nixon caught several passes from Jones on Tuesday, including the deep ball dime where he read Devin McCourty playing the deep middle of the field and broke away from Jonathan Jones’s help on a corner route. Nixon finished through some Jones contact on the play, too. It’s early, but the Pats might have something with Nixon as a slot receiver.

Speaking to reporters after practice, Perkins compared his role as a collegiate standout for Oklahoma to Patriots interior pass-rusher Deatrich Wise. In New England, Perkins is converting to on-ball linebacker, where he’s asked to play in a two-point stance rather than with a hand in the dirt and is dropping into coverage. Perkins anticipated a development year as a rookie knowing a position switch was coming. Now, he’s ready to contribute. Between Perkins and 2020 second-rounder Josh Uche, the Patriots are giving their young edge rushers plenty of opportunities to make the leap this season.

After a teaching session from the head coach early in practice, the Pats running backs were a factor on vertical routes from the backfield during team drills. Taylor ran up the seam, caught a perfectly placed ball by Jones, and took it to the house (although, you never know if he would’ve been tackled in a live setting), while Harris elevated to snag a Jones pass on another vertical route. New England is obviously known for throwing the ball to their running bakcs, but it would be nice to see them hunt matchups further down the field with their backs this season.

11. Pats CB Shaun Wade Playing in the Slot This Spring

Patriots fans always ask about second-year corner Shaun Wade’s progress, whom the Patriots traded a fifth-round pick and a seventh-round selection for at the end of camp last summer. Wade, whose best collegiate tape at Ohio State was as a bigger nickel corner, is playing in the slot most of the time this spring. With slot corners such as Jon Jones, Myles Bryant, and rookie Marcus Jones there to handle the smaller, faster slots, the team could look at Wade as a matchup defender for bigger slot receivers. It’s a crowded depth chart for Wade to carve out a role as a nickel corner, but you can see it happening based on the matchups.