Lazar: Why Patriots Felt They Could Move On From Stephon Gilmore

A solid defensive effort vs the Bucs made saying goodbye to Gilmore that much easier after the CB refused to take the field without a pay raise. 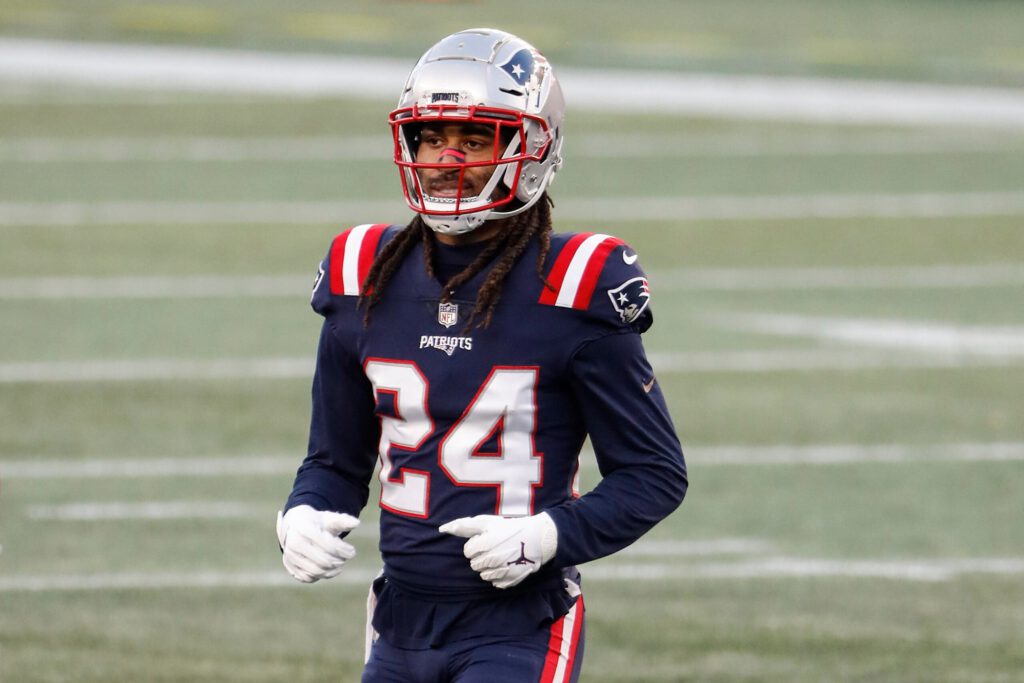 Gilmore, age 31, was in an ongoing contract dispute with the team dating back to the 2020 offseason, where the star cornerback wanted an extension or significant pay raise to play in 2021. The Patriots, on the other hand, wanted to see a healthy Gilmore (quad surgery) on the practice field before giving him a raise. An extension due to Gilmore age, recent injury, and performance in 2020 wasn’t on the table, a source told CLNS Media.

Strictly from a cap perspective, the Pats needed to shed salary to pay for their roster through the rest of the 2021 season. According to a source, there is some chatter in league circles that the Patriots could still find a trade partner for Gilmore before officially releasing him at 4pm ET on Wednesday.

Although the news of his release is stunning, the writing was on the wall that the Belichick was planning to moving on from Gilmore. The second-guess of the Pats’ football czar is that they didn’t move on from Gilmore sooner, when there were trade partners willing to give draft compensation in exchange for Gilmore’s services.

But the reality of the situation is that the Patriots weren’t paying an aging Gilmore and the secondary held up extremely well without him against the Buccaneers on Sunday night, limiting Tom Brady to a 51.2 completion rate and 6.3 yards per attempt.

New England’s strategy against Brady was to shadow Tampa’s top receivers in man coverage and provide help inside to J.C. Jackson (on Mike Evans), Jalen Mills (on Chris Godwin), and Jon Jones (on Antonio Brown).

Here’s a great example of the plan against Brady. The Patriots put six defenders near the line of scrimmage in a pass-rush position. Now it becomes a game of three-card monte for the offensive line; who is coming and who is dropping? New England ends up rushing three, dropping safety Adrian Phillips and linebackers Matt Judon and Josh Uche into shallow zones over the middle. By simulating pressure, the Pats get a one-on-one for rookie Christian Barmore on left guard Ali Marpet, and the second-rounder flushes Brady out of the pocket. In coverage, the trio of players dropping off the line of scrimmage leverage routes in the middle of the field. Judon and Phillips bracket Leonard Fournette coming out of the backfield, and Uche helps Jalen Mills cut off Chris Godwin’s shallow crosser, forcing Brady to hold the ball. Eventually, Barmore forces Brady to make a difficult throw on the move, not exactly his forte.

Along with limiting Brady’s traditional drop-backs, the Pats also played as one against play-action and in the red zone, holding the Bucs to one touchdown in four attempts inside the 20.

In this play-action attempt, we get a glimpse of another aspect of the game plan. This time, Phillips recognizes the play fake and drops underneath Godwin’s route to help Mills. On the other side, Belichick trusts cornerback J.C. Jackson on Mike Evans. A huge aspect of New England’s man coverage system is leverage and playing to your help. Jackson knows he has post-safety help, so he plays a trail technique (outside leverage) and focuses on shutting down fades, stop routes/curls, and anything breaking towards the sideline, knowing that Devin McCourty is there to help on the post. He plays the technique perfectly and nearly intercepts the pass (probably should’ve been OPI on Evans).

On this play-action pass, the Bucs ran a staple from Brady’s days in New England called “Charles Barkley,” where Tampa pulls the backside guard to simulate a run and sends Godwin on a crossing pattern behind the linebackers. Again, the Pats drop a zone defender into the middle of the field. This time, linebacker Dont’a Hightower uses a “robot” technique to turn and run underneath Godwin’s route, allowing Matt Judon to get a sack. Judon does a great job of recognizing that the backside guard is pulling to block him in the protection scheme and gets downhill to beat the puller to the spot. But, again, Brady probably gets this ball out if Hightower doesn’t take away Godwin. The Pats had it working at all three levels.

Lastly, the coverage plan in the red zone was to use Belichick’s match zones where the secondary will pass off underneath routes and man up on vertical patterns.

The key element to this coverage is what happens at the top of the screen with the Mills-Godwin matchup. When Godwin runs underneath the defense, Mills passes him off to Myles Bryant, then replaces Bryant as a deep-half defender and helps Kyle Dugger close off the tight end route. The pass-off forces Brady to hold the ball. Once again, he’s flushed out of the pocket and throws the ball incomplete.

The Pats consistently had all 11 players on a string, and the coverage allowed a less aggressive rush plan to pressure Brady despite only blitzing on eight of his 45 drop-backs.

With Belichick’s great game plans and the players executing at a high level, the Patriots’ defense will continue to give them a chance to win.

Here are some other leftover thoughts from reviewing Pats-Bucs:

1. Issues With the Patriots’ Running Game

There are two rather apparent issues with the Pats’ running game, and there’s no immediate fix to either. First, it’s incredibly challenging to produce on the ground without a mobile quarterback unless you have excellent run blocking. The offense is playing ten vs. 11 on every rushing attempt, so you’re asking a lot out of the offensive line to open holes for the backs while playing a man short.

However, that doesn’t excuse the fact that the blocking is subpar, especially from the tight ends and wide receivers. The Pats tried to run the ball on the perimeter against the Bucs away from Vita Vea, Ndamukong Suh, and Tampa’s linebackers. But the wideouts and tight ends got beat. Until the offensive line figures itself out, the Pats are probably best off running from spread formations to try to get the numbers back in their favor in the box. Running on seven and eight-man boxes with no threat at quarterback and shaky blocking is how you get -1 rushing yards in a game.

The route Henry ran to record his first career touchdown with the Patriots was impressive. Maybe it wasn’t the flashiest of plays, but it was the type of veteran savvy we haven’t seen at the position since Gronk was here.

The Pats ran an underneath mesh concept on the play with Henry and Kendrick Bourne crossing over the middle. When Henry sees Devin White dropping into a short zone, he gets depth on his route and goes behind White instead of in front of him. If he goes in front, White will jam him and perhaps throw off both crossing routes. Instead, he sneaks behind White and puts the deep safety in the middle of the field in a bind. The deep safety is late to it, and Henry walks in for six.

The Pats’ new tight end duo isn’t lighting up the stat sheet just yet, but that was a great sign of things to come from Henry.

Kudos to Mills for shadowing Godwin and holding up against one of the NFL’s best slot receivers. The Pats’ corner had plenty of help on the inside. But he threw some terrific jams at the line of scrimmage to disrupt the timing, played to his help and leverage perfectly, and competed against Godwin for four quarters. The most impressive element of his tape in the first month is how seamlessly Mills has transitioned into the defense. The veteran is passing off routes and rarely is a part of any coverage busts. He might not be the best coverage guy in the league, but Mills is solid with the Pats managing his role.

4. DB Kyle Dugger Continues to Stand Out on Tape

The word “bust” and Kyle Dugger shouldn’t be thrown around as much as it. Dugger still isn’t perfect in man coverage, but his footwork and technique are improving. He’s way more competitive against tight ends than he was in his rookie season. The last step for him is studying the tight end route tree more to anticipate instead of reacting. But he’s getting there.

Plus, as a run defender, he’s an absolute force in the box, especially when he gets a head of steam. He’s a violent hitter when he takes on blockers and makes some impressive reads to fire into gaps to get into the backfield. He’s developing nicely in the Patrick Chung role.

This one doesn’t surprise me at all. In fact, Patriots Beat listeners will remember that I reported this was a real possibility last week. Along with Collins’s ability to contribute right away, the tape is not friendly to Dont’a Hightower or Kyle Van Noy. Hightower looks rusty, a step slow to the point of attack, and isn’t defeating blocks with the same force we are accustomed to seeing. As for Van Noy, he’s going through the motions, and there are way too many plays where he looks lost. He had Tom Brady dead to rights twice on Sunday night and didn’t make the tackle either time. We can explain Hightower’s dropoff after the opt-out but have no idea what is going on with KVN. Now that Collins is here, Van Noy’s playing time could decrease substantially.