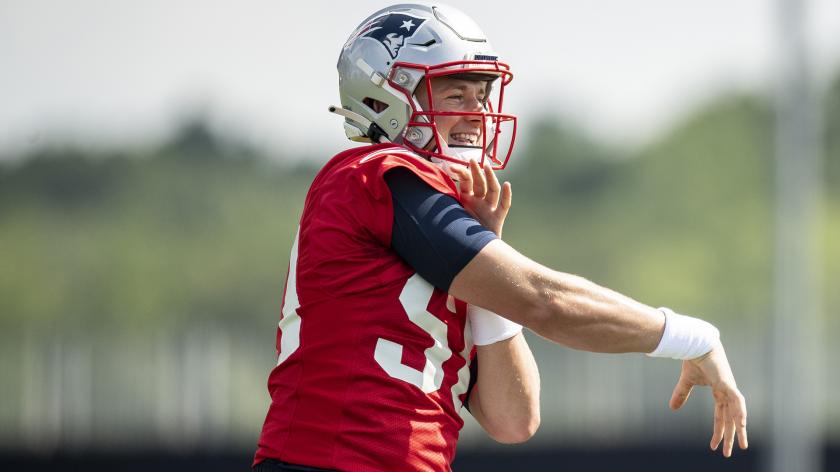 FOXBORO, MA — The Patriots held their second training camp practice in full pads on a rainy morning at Gillette Stadium on Thursday.

For the second consecutive day, rookie Mac Jones was the best quarterback on the field. Some of Jones’s best reps were against the scout team defense, but the Pats’ first-rounder was in complete control and ran the offense at a high level.

Jones made several big-time throws in extended 11-on-11 work, the second day in a row where he out-repped Newton (19 throws to 11). At one point, Jones took 13-straight reps.

Along with the heavy workload, Jones had dimes to Kristian Wilkerson (corner route), Hunter Henry (seam) and hit N’Keal Harry in-stride on an in-breaking route for a huge catch and run.

But the play that stood out the most wasn’t a downfield throw but rather a quick slant to Harry. Before the ball was snapped, Jones sniffed out a blitz by linebacker Ja’Whaun Bentley. He tapped his helmet to “alert” the protection to the blitz, moved his running back over to block Bentley, and threw “hot” and in stride to Harry to beat the pressure. That’s the good stuff.

Cam Newton is capable of running this offense. The Pats’ current starter is playing well in camp and is improving in the system, as offensive coordinator Josh McDaniels noted on Wednesday.

There’s so much back-and-forth between Newton supporters and Jones stans to the point where it feels like some are openly rooting for one over the other.

My assessment is not based on rooting interest, just what my eyes are telling me, and they’re saying that Newton is capable, but Jones is practicing like the QB the Pats hoped they were getting in the draft.

To that point, you don’t draft a quarterback in the first round, have him take reps with the starters right out of the gate, and watch him run your offense effectively, then sit him on the bench for an entire year.

If you see it as a bad thing that the Pats’ first-round pick looks the part, that’s on you.

Let’s empty the notebook from the second day in pads for the Patriots on Thursday:

Newton went 5-of-11 in competitive 11s on Thursday, with his best completion of the day coming in 7-on-7 to Jonnu Smith. Newton put the ball in a perfect spot for Smith as he ran towards the sideline, keeping it away from safety Kyle Dugger who had good coverage. The bad for Newton was that he was again holding the football and failing to anticipate open receivers. It stood out on a pass breakup by J.C. Jackson on a ball for Nelson Agholor. Agholor was running a post route when he read the middle of the field was closed. Agholor correctly sat his route down instead of running into the post safety, and it was there for a completion, but Newton threw the ball too late, which let Jackson back in the play. We should be willing to chalk that one up to Newton and Agholor working on getting on the same page. But the receiver ran the route properly, and the QB was slow to pull the trigger. For the second consecutive day, Mac was the best quarterback on the field. It’s now an even 4-4 on the scorecard, and the tie should go to the rookie.

In an early full-contact period, the Patriots ran one of my favorite drills called “inside six,” which is essentially an inverse of 7-on-7. Instead of receivers versus the back seven, it’s the offensive line and tight ends versus the defensive front seven for run game work. During a very competitive drill, Pats tight end Jonnu Smith opened a massive hole for the back by driving second-year linebacker Josh Uche into the parking lot. It was teach tape run blocking with Smith’s feet, hands, and pad level owning the rep. Smith lines up all over the formation in these practices. He’s a highly effective run blocker, an explosive player in the open field, and does enough with his route running to get open downfield. Smith is an outstanding football player and might be the best free-agent addition on offense when it’s all said and done.

We got a long look at the offensive and defensive lines doing both one-on-ones and two-on-twos, where both sides worked on line stunts. Here are the highlights:

Davis won all four of his reps in one-on-ones and made two stops during the inside six drill. He is mainly repping with the scout team at the moment, but after some productive snaps in his three appearances last season, Davis has good tape as a Patriot. He has a great combination of size (6-6, 320) and athleticism. Don’t sleep on Davis sticking around as a backup IDL.

There are at least three, if not more, reps that stand out from the first two days of full pads where Isaiah Wynn and Michael Onwenu are cleaning out the house. Wynn and Onwenu are the two best offensive linemen on the field through eight practices. Onwenu hasn’t lost a one-on-one rep and is controlling the line of scrimmage. Wynn looks fantastic. He stone-walled Deatrich Wise in one-on-ones, and his run blocking technique combined with upper-body power is noticeable on each rep. Wynn truly can be one of the league’s top left tackles if he can just stay healthy.

We saw 13 competitive reps of one-on-ones between some of the receivers and all of the cornerbacks. The primarily inside receivers, such as Kendrick Bourne and Jakobi Meyers, were working a different drill. It mainly was outside guys, like Nelson Agholor and depth receivers. Here were some highlights: