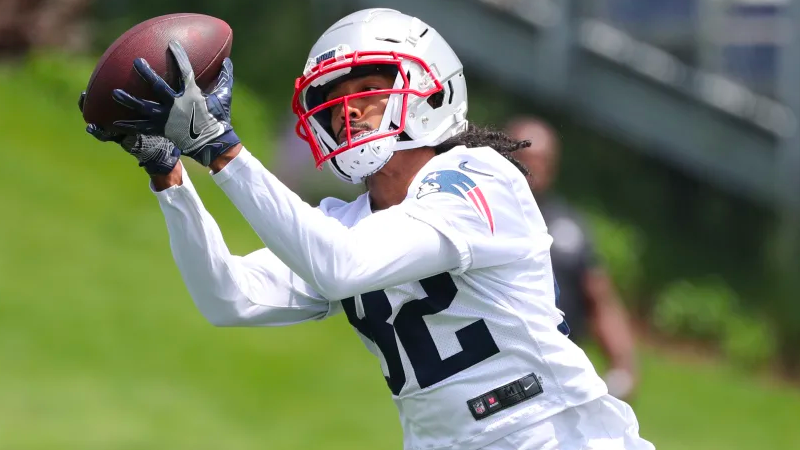 FOXBOROUGH — The Patriots held day two of their mandatory minicamp at Gillette Stadium on Wednesday, and it had a very similar feel to yesterday’s session.

Tom Brady and his teammates went through a two-hour practice session that included a full-field hurry-up drill for warmups, four-on-four, seven-on-seven and 11-on-11 team drills.

The Patriots embody that in every way, even in these non-contact practices in June; everything that you see them do on the practice field has a purpose that translates on game day.

For example, during the four-on-four portion of practice, the Patriots were simulating rub routes out of a stack alignment. The offensive players were getting their timing down while the defensive players were practicing the different checks that they use to defend these popular route combinations.

As you’d expect, Bill Belichick has every second of practice accounted for, and everything is designed to put the players in the high-pressure situations that they’ll be in come September.

Belichick also mentioned an important distinction for the Patriots when it comes to non-contact minicamp versus full contract training camp at the end of the summer.

“This is more of a teaching camp, not an evaluation camp,” Belichick said. He then added that the team doesn’t begin the evaluation process until they put on the pads in training camp.

Belichick’s words are important to keep in mind as we evaluate players this week.

Also, 2018 first-round pick Isaiah Wynn was a spectator once again during team drills as he continues on his road to recovery from an Achilles tear last season.

Here are seven other observations from day two of Patriots minicamp:

During his media availability yesterday, tight end Ben Watson noted that Tom Brady’s competitiveness and love for the game, even in practice, is contagious for the rest of the team. Observing Brady these last two days, his practice habits explain why he’s a six-time Super Bowl champion. Brady doesn’t take a single rep for granted and does everything with urgency.

In this video from warmups, again it’s warmups, you can see what I mean. Brady is throwing a pass to get his arm loose to a ball boy, and his attention to detail in his drop is still flawless. Brady takes a five-step drop taking four steps and a hitch step to transition into his throw. No wasted movement, no slacking on the footwork, perfect timing; that’s why he’s the GOAT.

Over the last two days, Brady took three players with him for some extra work while the rest of the team went through the special teams portion of practice. Those three players were rookie wide receiver N’Keal Harry, tight end Ben Watson and running back James White. Brady threw some slants to Harry and gave some tips to the rookie during today’s session. He also worked on play-action crossing patterns with Watson the last two days.

As mentioned above, the Patriots offense started practice with a full-field hurry-up drill that simulated an end of half or end of game scenario. Although they were going against air, the personnel group with Brady was notable. Brady worked with Julian Edelman, Phillip Dorsett, Maurice Harris, Matt LaCosse at tight end and James White at running back. It would not be surprising to see that group plus N’Keal Harry as Brady’s main targets in Week 1.

Belichick called this a teaching camp, and the Pats rookie class has had its fair share of teachable moments so far. Top pick N’Keal Harry took some hard coaching, especially yesterday, for his route running; there were a few instances where Harry ran the wrong route or didn’t run the pattern correctly, so he was called back to do it again. Rookie running back Damien Harris has been heavily involved in practice with Sony Michel absent, but he’s still getting a feel for the scheme and was called back today for running off the wrong shoulder of one of his lineman. Lastly, fourth-round pick Jarrett Stidham ran a lap for fumbling a snap and admitted after practice that the Patriots offense is very different from the spread system he ran at Auburn. Some will take these points as bad news, but this is what minicamp practices are all about, especially for rookies.

During 11-on-11’s, the Patriots defense forced three consecutive incompletions that highlighted the insane depth that the team has in the secondary. There was nobody open on all three plays, one of which was quarterbacked by Brady, and three different players got their hands on passes: Stephon Gilmore, Duke Dawson and Duron Harmon.

The Patriots had two waves of defensive backs in what’s now their base nickel package: the first wave consisted of Stephon Gilmore, Jason McCourty, Jon Jones, Devin McCourty and Duron Harmon. The second wave had JC Jackson, Joejuan Williams, Duke Dawson, Obi Melifonwu and Terrance Brooks. There are a few players in that second group that would start on some other teams, and Patrick Chung isn’t even out there yet.

The punter battle between incumbent Ryan Allen and rookie Jake Bailey continues to be one of the best competitions of the summer. Belichick told me after practice that situational punting is where the evaluation process starts for the team, noting that punting is a lot like golf in how sometimes you need the driver and other times you need a sand wedge. From this viewpoint, it’s clear that Bailey has a better leg than Allen, but Allen is more consistent. Bailey tends to have a shank or two a practice whereas, with Allen, you pretty much know what you’re going to get every time.

Free-agent addition Maurice Harris continues to impress this spring, and his play has seen him climb the depth chart. Rookie N’Keal Harry had a great toe-tapping catch in the back of the end zone late in practice, but I’ll give the nod to Harris who caught a ball over Jon Jones coming across the field. Harris has terrific hands, body control and versatility. He has moved around the formation mainly holding down a flanker role where he is off the line of scrimmage so he can come in motion. It’s early, but Harris’ role looks similar to Cordaralle Patterson’s last season. However, Harris is more natural as a receiver but Patterson was a more explosive athlete.