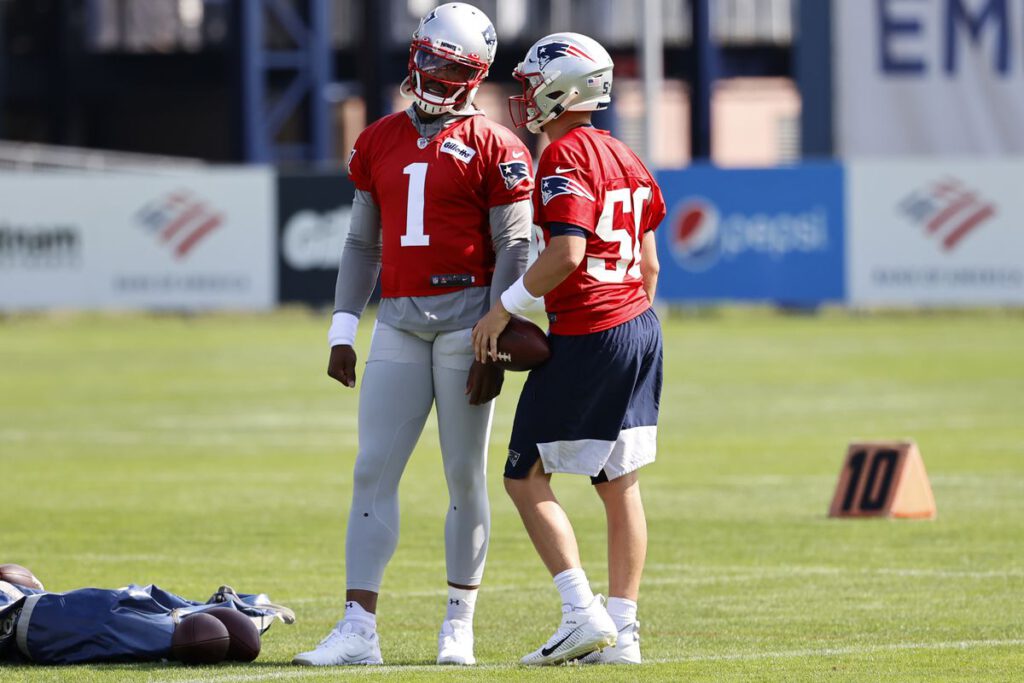 FOXBORO, MA — The Patriots held their fourth training camp practice in shorts and shells on the fields behind Gillette Stadium on Saturday.

After an impressive third day for the offense, it was a sloppy day for Cam Newton and company, with both Newton and rookie Mac Jones failing to find a rhythm.

As these things typically do, the Patriots’ offense is seesawing. In fact, my Sunday take is on how good the new-look offense is in the early going.

There’s still some truth to that, and Kendrick Bourne and Nelson Agholor had their moments today, but the operation wasn’t sharp overall.

Defensively, I’m waiting until the pads come on to make any real evaluations, as tackling is a major missing ingredient right now. Depth in the secondary is a concern still, though. The cover talent drops off considerably at cornerback after J.C. Jackson and Jon Jones.

The one easy takeaway from the defense is that the front seven and starting secondary, especially once Stephon Gilmore returns, looks like the type of defense Bill Belichick wants.

They have waves of versatility, experience to run different pressure packages, and top-end cover talent in the backend.

Second-year linebacker Anfernee Jennings returned to practice after missing the first three sessions due to personal reasons. Offensive lineman Ted Karras wasn’t present after an injury on day three, and the rest of the absences were the remaining PUP/NFI guys.

After speculation that Belichick’s mind was changing on his starting quarterback last week, the Pats head coach backed Newton again on Saturday morning. Newton was the best QB on the field for the first four days of practice, so Belichick’s stance isn’t a surprise. Following two strong days, Newton wasn’t as sharp with his accuracy on Saturday. He sailed a pass high over a very open Jakobi Meyers as Meyers ran a crosser, threw too far in front of N’Keal Harry on a goal-line slant, and was 4-of-12 overall in competitive drills (not counting the one’s versus twos early in practice). The Pats’ starter did finish strong with a strike to Kristian Wilkerson in the corner of the end zone and a completion to Meyers on a slant with Jon Jones in coverage. Cam also connected with Kendrick Bourne in the corner of the end zone for a pretty TD. The process was fine from Newton, but the accuracy was inconsistent.

During the first period of competitive team drills, Jones had arguably his worst stretch of camp to date. He went 0-of-4 with two passes batted down at the line and a wild throw in Meyers’s direction. Then, the rookie bounced back in a closing red-zone period by going 4-of-4 (one play was likely a sack in a game). Jones’s best throw came on an in-breaker to Wilkerson, where he looked to his left to move the coverage and then dotted it to Wilkerson back to his right. In the batch of four, the middle two throws were schemed plays or easier throws for the QB. But the pass to Wilkerson was nice, and he had a great bob-and-weave moment in the pocket to find Meyers on his final throw (probably a sack in a game). There’s plenty of things to like about how Jones is practicing. His timing, touch, and pocket movement stand out daily. Still, Newton has gotten the better of him in the first week of camp.

Amid ongoing trade speculation, it’s fair to say that Harry is having a decent start to camp. Harry, a big target with the Pats mainly working in the red zone, has made plays. He went to the ground to snag a low back-shoulder toss on day one, beat Joejuan Williams to the spot on a slant on day two, and got the corner on a motion swing pass on day four. Harry looks a tad quicker and lighter than in years past but still has footwork issues at the top of his routes.

Here’s a clip of Harry going through a positional drill at Saturday’s practice. Focus on his inside (right) foot, or drive foot. That’s the foot he is going to plant on as he goes into this break. When he puts the foot down, the idea is to gain ground out of his break with his drive step. Instead of turning that foot and getting it out in front of him, Harry loses ground by stepping underneath himself. So it’s plant, pick up the right foot, put it down underneath himself. The right way to do it is to plant, pick up the right foot, point it towards the sideline and get it out in front of your body. By stepping underneath himself, he’s making it harder to get open.

For the second time in camp, the Pats’ new nose tackle batted a Mac Jones pass down at the line of scrimmage. It’s impossible to evaluate the trenches without pads fully, but Godchaux has the looks of an anchor in the middle of New England’s defense and disrupts the passing game by getting his hands into throwing lanes. Hopefully, he’s a force in the running game, which is why he’s here. In the very early going, he looks the part.

Wilkerson finished strong with two touchdowns in the final red zone period, one each from Newton and Mac. On the throw from Cam, Wilkerson dusted Jalen Mills on a corner route, and he beat Joejuan Williams inside for another score from Jones. Wilkerson posted a relative athletic score of 9.72 out of ten as a 2020 UDFA. He has speed, the foot quickness to run routes, and is starting to make plays. Wilkerson could be a training camp all-star, especially without contact, but he has stood out more than any other depth receiver.

6. DB Kyle Dugger Breaks Up a Pass on Nelson Agholor

On Friday, we broke down the up and down performance in coverage of second-year safety Kyle Dugger. Although that was a bit harsh on Dugger, it was notable when he broke up a pass in the end zone intended for Nelson Agholor on Saturday. Agholor is making a great first impression in camp, giving even J.C. Jackson problems at times, so good on Dugger for blanketing Agholor and getting his hand in there to break up a slant.

We all know White will be a big factor in New England’s offense this season, but it was also noteworthy to see how often the other backs were catching passes. Damien Harris, Sony Michel, and Brandon Bolden are all making grabs out of the backfield. Harris just missed with Newton on a wheel route with Kyle Van Noy in coverage, while Michel looks respectable on check downs, and Bolden is sneaky good in that phase of the game. Bolden looks great after last years’ opt-out, and it wouldn’t surprise me if he’s the Burkhead replace for a while.