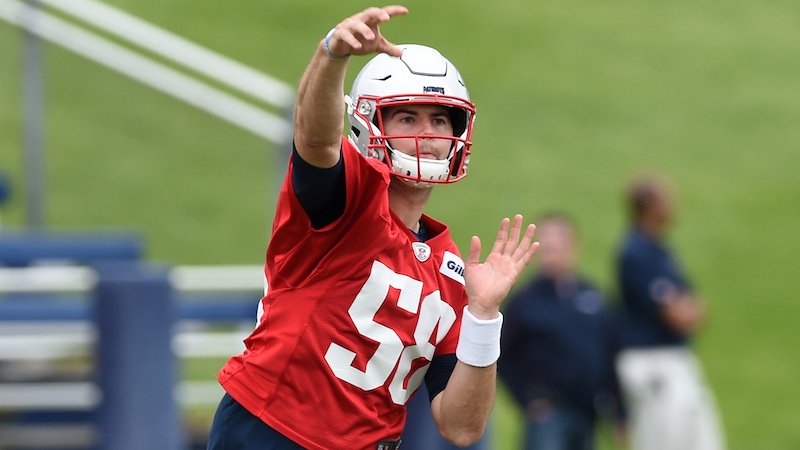 FOXBOROUGH — The Patriots went through another non-contact practice on Friday, but this time it was without quarterback Tom Brady.

Brady arrived a few minutes late with injured wide receiver Julian Edelman not in uniform for what was a scheduled day off for the soon to be 42-year-old. Brady served as a cutoff man for teammates Brian Hoyer and Jarrett Stidham during positional drills and gave tips to his receivers throughout the session.

In years past, Brady has always participated in practice when healthy, and it was indeed rare to see him out there with the rest of the team but not participate.

For those sitting out, tomorrow’s first padded practice marks the real beginning of training camp. If we don’t see Andrews and Bennett this weekend, then we can start taking their absences a little more seriously.

The Pats rookie attempted 18 passes during team drills as we got an extended look at Stidham’s progress. Stidham is still holding onto the ball too long in the pocket resulting in late throws and missed a few safety rotations. For example, Stidham missed an open Lance Kendricks on a deep crossing route when the defense rotated from a two-high look into a single-safety coverage after the snap. The route that Kendricks ran should’ve been Stidham’s first read based on that defense, but he got stuck on a two-high read because of what he saw pre-snap. That’s not uncommon for young quarterbacks as post-snap safety rotations don’t happen as often in the college game.

On the bright side, Stidham finished with probably his best stretch of play in the five practices we’ve seen this summer going back to minicamp. During a red zone period, Stidham completed five consecutive tight-window throws. In particular, he dropped a dime for a touchdown to James White on a wheel route with pressure in his face from a blitzing Ja’ Whaun Bentley. As you’d expect for any rookie, Stidham is still trying to grasp the speed of the game and the Patriots offense. But that final red zone session left me optimistic about his progress.

Last season, there was a lot of talk about Dont’a Hightower losing a step in terms of speed. Hightower threw water on those hot takes in the postseason, but early returns suggest he might take it a step further this season. The three-time Super Bowl champ is in excellent shape running easily with tight ends and running backs out of the backfield. On one red zone play, he made multiple cuts to stay with tight end Stephen Anderson eventually leading to a throwaway by Stidham. Hightower is still manning his typical strong side linebacker position in the Patriots defense.

After a somewhat aggressive start to practice yesterday, Isaiah Wynn was more of a spectator today during positional drills before departing to the lower field for conditioning work. Wynn is still taking reps in warmups with the starting offensive line but continues to sit out team drills giving way to Joe Thuney at left tackle. Along with Thuney, Dan Skipper and Cedrick Lang saw some reps at left tackle during Friday’s session. With Saturday marking the first padded practice of camp, it’ll be interesting to see if Wynn ramps things up.

4. Damien Harris Gets a “Thumbs Up” From Bill Belichick

During 11-on-11s, defensive play-caller Jerod Mayo dialed up a blitz which led to a free run at Jarrett Stidham for fellow rookie Chase Winovich. Stidham quickly looked to Harris, his safety valve on the play, and Harris got into his route in the flat and rescued Stidham from Winovich. After the play, Belichick yelled “good job” to Harris who does look a little faster into his routes than Sony Michel did last season. We’ll start evaluating the running game once the pads go on, but Harris is doing all the right things so far.

For the first time during training camp, we got to see incumbent Ryan Allen and rookie Jake Bailey compete on the practice field. As was the case in minicamp, Allen remains the more consistent option while Bailey’s leg is undeniable. The rookie boomed three punts with over five seconds of hang time and sent the returner backward on a few occasions to receive the ball. Also of note, Bailey got eight punts during team drills while Allen only punted four. The Patriots already know what they have in Allen, but the extra work for Bailey is worth monitoring moving forward.

With Tom Brady taking the day off, the Pats rookie saw an uptick in snaps during Friday’s practice.