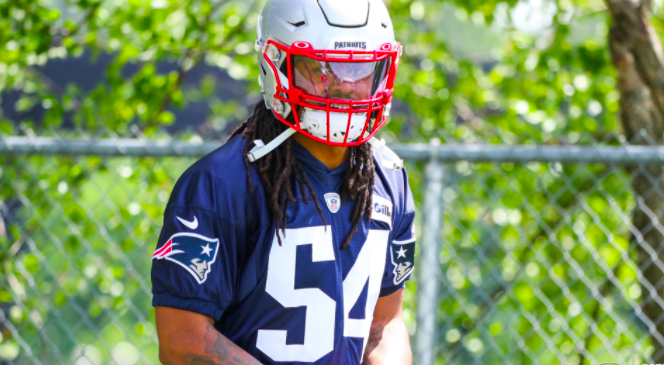 Foxborough — The New England Patriots held an hour-and-30 minute practice session in front of the media on the fields behind Gillette Stadium on Thursday afternoon.

I spy a certain no. 54 at #Patriots practice. Boomtower is back.

He was a full participant, and looks like he’s in good shape.

Although Newton was absent, the Patriots got back a key member of their defense with the return of linebacker Dont’a Hightower in his first practice since opting out of the 2020 season.

Hightower was heavily involved and looked like his old self. The two-time Pro Bowler was moving well while playing his usual spots in the front seven, picking up where he left off in 2019.

The Pats linebackers’ attendance and physical conditioning should quell any fears that Hightower might not suit up for New England this season; he looks ready to go.

With Newton sitting out practice, third-year quarterback Jarrett Stidham led off all team drills, followed by a rotation of rookie Mac Jones and Brian Hoyer, who switched off after Stidham.

Lastly, tight end Hunter Henry appeared to injure his lower leg during team drills. After a quick conversation with trainers and a jog to test the injury, Henry shut it down for the rest of practice.

Here are seven other observations from the final open OTA session of the offseason program:

The defense had five rushers standing over the line of scrimmage. Pats rookie quarterback Mac Jones quickly checked with his center, looked towards wide receiver Kendrick Bourne, and snapped the ball. The defense brought a blitz, and Jones got the ball out quickly to Bourne in-stride on a slant route that would’ve allowed the veteran wideout a chance to run after the catch.

There are glimpses of the quick processing skills and ball placement that attracted the Patriots to Jones in the first round, but he has a long way to go. After practice, Jones acknowledged that he’s overthinking and still building confidence like any rookie. His pass to Bourne was his first completion to a wide receiver during team drills in the three practices open to the media so far. Again, none of this is abnormal. All rookies are swimming in a complex playbook right now. Nonetheless, we are seeing primarily short throws and check-downs. Judging Jones at this early stage isn’t fair, but eventually, he’ll need to start letting it rip.

Stidham was the first quarterback in the huddle for the Pats during team drills. After a strong practice last Friday, Stidham is certainly making a case to stick around. He is showing an improved confidence level compared to what we saw in camp the previous two seasons and tried energizing his teammates on a few occasions. Stidham completed a deep pass on a go ball to Kristian Wilkerson over Jalen Mills and connected with Wilkerson again on a sideline out. He wasn’t as “eye-popping” in this practice as last week, but Stidham is having a good spring.

3. Brian Hoyer Was the Best Quarterback on the Field

The veteran QB has no chill in these practices, and he’s more inclined to rip it downfield than the younger quarterbacks because he isn’t afraid to make mistakes. Hoyer had the three best throws of the day: a deep post pattern to Isaiah Zuber who got inside of Adrian Colbert, a crosser to Kendrick Bourne placed perfectly over D’Angelo Ross, and a rocket up the seam to second-year tight end Devin Asiasi that traveled over 25 yards. Hoyer has no shot of winning the starting job, but you have to give him credit for the gunslinger mentality he brings to OTAs. If Jones or Stidham were making these throws, the hype train would be humming.

Although they’re still missing Wynn, this was our first look at Brown in his second stint with the Patriots. He looks as massive as ever and moved well. With Wynn’s durability concerns, it wouldn’t surprise me if we see a lot of the following OL combination this year (from left to right): Brown, Karras, Andrews, Mason, Onwenu. The plan is to have Wynn on the left side and Brown on the right side, but with Wynn sitting out OTAs, it’s a good opportunity for those five to work together, seeing that’ll be the group if Wynn experiences another injury.

When the Patriots signed Mills to a four-year deal, his ability to move around the secondary was the main reason he made sense in New England. Last week, we saw Mills working at both safety positions. This week, he was playing outside corner. Mills struggled as an outside corner during his time with the Eagles, but with the Pats’ lack of experience behind Stephon Gilmore and J.C. Jackson, he could find himself there if one of New England’s top two corners goes down. Mills fits right into the Pats defense as someone that exemplifies the “we are all DBs” mentality where cornerbacks and safeties are often interchangeable.

Zuber is setting himself up for a push to make the roster this summer based on way-too-early impressions. He has NFL receiver speed, size and is improving his routes. Zuber got inside safety Adrian Colbert on a deep post pattern and then caught Jalen Mills backpedaling before breaking on a speed out. As he improves as a receiver, Zuber adds value as a returner and ball carrier on offense (sweeps, end arounds, etc.). It’s early, but I like his chances to make the team more and more. Jakobi Meyers and Kendrick Bourne had a strong practice as well.

It’s hard to put much stock in pass-rush reps without pads, but Uche is a blur off the ball. He tested Trent Brown on a speed rush early in practice and then smoked rookie tackle Will Sherman during 11-on-11s with a “ghost” move where he fakes a punch and dips underneath to turn the corner. If Uche is this good once the pads go on, watch out for the year two breakout.