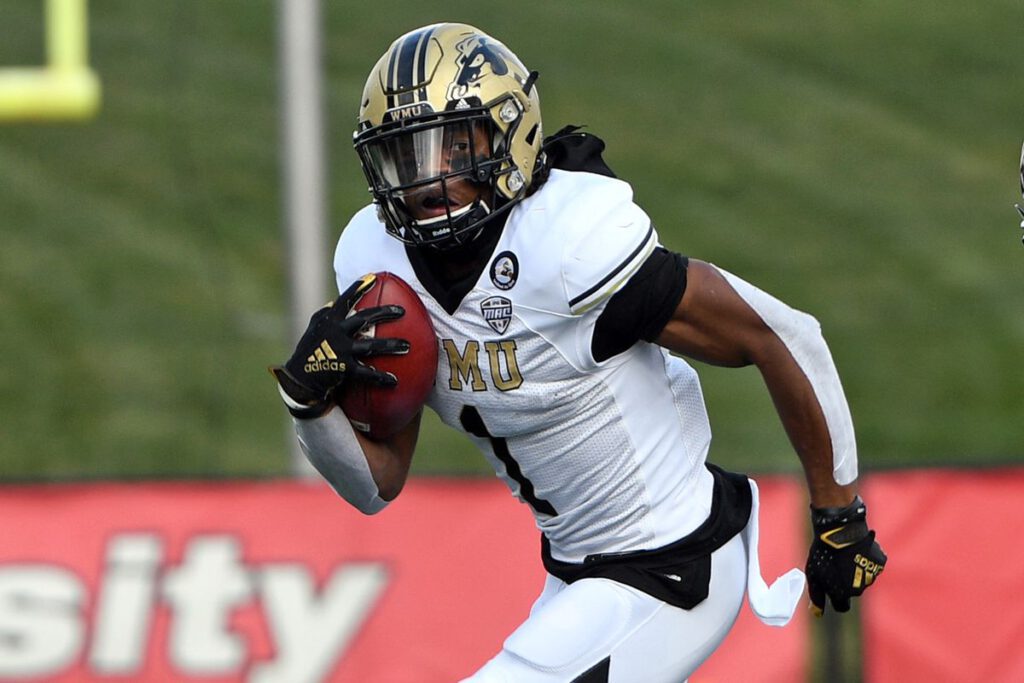 Predicting Bill Belichick’s plans for the Patriots is a difficult task, but we will do our best by creating a big board with the top 50 fits for New England in the 2021 NFL Draft.

The big board produced five future Patriots in N’Keal Harry, Joejuan Williams, Chase Winovich, Damien Harris, and Josh Uche over the last two drafts. Hopefully, 2021 will be better than 2020.

My goal is to hit on as many players as possible that New England might select in the first three rounds, emphasizing the premium picks, in which the Pats currently hold three (no. 15, no. 46, and no. 96). With that in mind, we will include prospects projected to go in the first four rounds.

The players were decided by comprehensive film study, scheme fit, and Patriots draft trends and ranked by my overall grades.

Here are the first batch of prospects in our 31-40 tier:

Northern Iowa RT Spencer Brown is 6-8, 311 with an elite athletic profile (6.96s 3-cone). Hardly ever see anyone turn the corner on Brown. Uses his long arm/strides and quick feet to get to set points. First clip is a nice job of chopping down on an inside long arm. #Patriots pic.twitter.com/7uiHnqsI2P

A hulking tackle prospect, Brown’s technique will need to be coached up at the next level, but he’s got a solid foundation. The Northern Iowa product stands at 6-foot-8, 311 pounds, with a superb athletic profile scoring a ten out of ten in relative athletic score. Brown has the foot speed and lateral slides to easily mirror edge rushers. His athleticism translates to blocks on the move, and he finishes with a little nasty. Although Brown is an intriguing athlete, his pass sets are raw, and his high center of gravity causes some issues with anchoring and generating movement. Still, with the right coaching, he has loads of upside. The Pats have a good history of developing tackles like Brown into starters.

Penn State EDGE Jayson Oweh is a nice developmental prospect on day two. Didn't record a sack in 2020 but had five in 2019.

Ideal size (6-5, 257), freakish athlete w/burst off the line, lateral mobility, motor. Likes club/rip & works down the line as a run defender in a hurry. pic.twitter.com/TBTxmbHVin

Based on his Pro Day numbers, Oweh’s athletic profile checks the most Pats boxes among edge defenders in this class, but he is raw with only 20 games under his belt. Oweh has a massive frame at 6-foot-5, 257 pounds, and is a terrific athlete. He gets off the ball quickly, uses his long strides to gain ground, can bend the corner, and has an effective chop-rip move. As a run defender, Oweh needs to use his length more effectively but there are flashes of elite range working down the line of scrimmage. Oweh is explosive in every way, and if he can learn to use his length to set a sturdier edge, he’ll develop into a force at the next level.

Shelvin is the best nose tackle in the class that can play head-up on the center or shaded in the A gaps. At 350 pounds, the LSU product is a massive run-stuffer. His ability to anchor down against double-teams with excellent pad level and take-on technique gives off major Patriots vibes. Shelvin also has a sturdy punch that stuns blockers and allows him to reset the line of scrimmage as a two-gapper. In today’s NFL, nose tackles are losing value, but the Patriots will appreciate a player like Shelvin, who has good fluidity for a man of his size and plenty of power.

Nico Collins is a contested-catch WR. But I like him because he's sudden in his releases. Saw it at the Senior Bowl, too. Beats CBs off the line, which allows him to stack & high point downfield.

Hesitation release + burst gets the CB on his back. #Patriots pic.twitter.com/TcxcsitbVN

If the Patriots want a true outside receiver, Collins would be a nice addition. After standing out during Senior Bowl practices, the Michigan product produced a relative athletic score of 9.56 out of ten at his Pro Day. At 6-foot-4, 215 pounds, Collins ran a 4.45 in the 40-yard dash and a 6.71-second three-cone, giving him a terrific athletic profile. As a contested-catch artist on the outside, Patriots fans might not want to go back down that road. However, Collins’s tape shows a receiver with good lateral mobility and hand-fighting skills to get off press coverage at the line of scrimmage. His releases are further along than N’Keal Harry’s, which allows him to build up his speed and get defenders on his back to set up contested wins downfield. Collins has a high ceiling and is one of the better values at wide receiver in a class that doesn’t have a ton of outside guys.

Onweuzurike might not have ideal length, but he plays like a perfect fit as a 3-4 defensive end. At 6-foot-2, 290 pounds, Onweuzurike tested as an above-average athlete, but it’s his play strength and ability to leverage blocks that stand out the most. This is a tough interior defender to move that plays with heavy hands that allow Onweuzurike to read and react to ball carriers in a two-gapping system. Onweuzurike plays with naturally low pads and leverage to take on double-teams, sit in gaps, and consistently reset the line of scrimmage with his upper-body strength. He has the tools to play as a five-technique in New England’s system while bumping inside to rush the passer.

These are the only plays you need to see to sell yourself on Missouri S Tyree Gillespie. Mostly a single-high deep safety. Enforcer on in-breakers (that's Smith in first clip), runs the alley to tackle ball carriers (that's Waddle in second clip), core special teamer. #Patriots pic.twitter.com/QfaFc3jbbZ

Gillespie played mostly single-high safety in Missouri’s defense, and showed impressive athleticism to come downhill as an enforcer on in-breakers and in run support. Gillespie separated receiver from football on more than one occasion and had no issues running the alley to tackle ball carriers. His awareness in the deep-middle was impressive, as was his athleticism (4.38 speed), and he was a regular on special teams covering kicks as a gunner. Gillespie also had some impressive reps versus Kyle Pitts in man coverage, and had his best game of the year against against Alabama. A physical, athletic deep safety with core special teams value? Sounds like a Patriot.

D'Wayne Eskridge is one of the most explosive wide receivers in the draft. Elite catch-and-run playmaker. Can stop on a dime too in his breaks. Brings special teams/return value. Very intriguing prospect. #Patriots pic.twitter.com/DkNmiqicKi

Eskridge did just about everything for the Broncos, from playing slot receiver, cornerback, returning kicks, and covering kicks on special teams. If that doesn’t sell you on his fit with the Patriots, Eskridge is one of the most explosive ball carriers in this year’s class. He’s not the quickest at the top of his routes, but once the ball is in his hands, he’s shot out of a cannon. Eskridge can take a slant 75 yards to the house or catch an underneath curl and quickly turn upfield. In limited reps on the outside, Eskridge was also able to stop down nicely along the sideline to create separation. The Patriots met with Eskridge multiple times, and his four-down versatility screams New England.

#Patriots draft target: Purdue WR Rondale Moore. Moore only played in 7 games over the last two seasons due to injury but is an electric ball carrier and quick-twitch WR.

Moore is widely considered one of the top receivers in this class. However, he played in just seven games over the last two seasons due to injuries, and his slight frame suggests that injuries may be a recurring theme throughout his career. For those reasons, I’m lower on him, but he’s an electric playmaker when he’s out there. The Purdue product is one of the best ball carriers in this class and has excellent burst out of his breaks to create big plays. His speed translates on vertical routes, after the catch, and in the return game; he’s a threat to score from anywhere on the field. With that said, you’re rolling the dice with Moore that he’ll stay healthy, and the Pats haven’t had the best of luck with that recently.

If the #Patriots want a centerfielder at the safety position, UCF's Richie Grant might be the best in this class. Ballhawk. Range, reads the QB's eyes, and high-points. pic.twitter.com/d1EC5B1AKP

Grant is a do-it-all safety prospect that affected the game mainly as a deep safety at UCF, ball-hawking for interceptions. At the Senior Bowl, he also flashed in practice as a strappy man coverage DB that could have the versatility to guard tight ends. With ten interceptions on his resume, Grant has the production to back up the athleticism and will likely carve out a role on special teams as well. The biggest knock on Grant is that he had some issues with pursuit angles and tackling as the last line of defense. The Patriots prefer DBs that are sound tacklers, and for a good reason, but few safeties in this class have Grant’s coverage skills.

The University of Texas product made 34 starts for the Longhorns at both tackle spots and has arguably the strongest hands of any tackle prospect in this class. Cosmi will latch onto defenders to toss them wherever he wants them to go and he’s a nasty finisher. At nearly 6-foot-6, Cosmi checks all the measurables boxes and knows how to use his length to his advantage. There are plenty of physical traits to like: upper-body strength, foot speed, and size/length. However, his technique needs work, mainly refining his kick-slide to get more momentum out of his stance rather than relying on a side-shuffle to mirror pass rushers. When you watch Cosmi’s inside (post) foot, it barely moves when he kicks out, so he has to run his feet to get to his set points rather than kick out and slide. He has the athleticism to fix his pass sets, and with the length and upper-body power, Cosmi should develop into a starting tackle if all goes well.