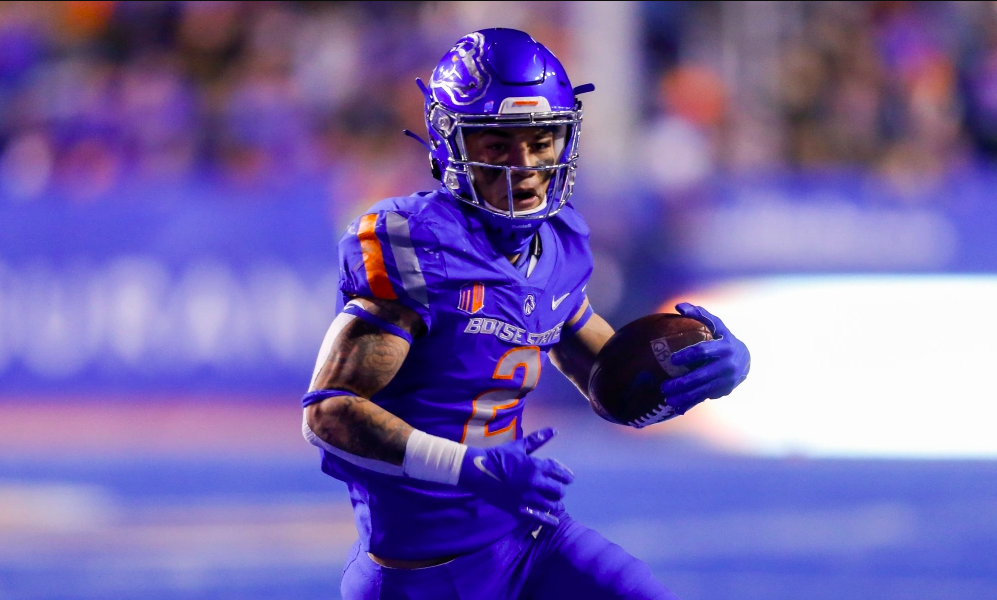 Let’s begin with the 41-50 tier, which highlights prospects who are projected day-two picks:

As the Patriots search for a starting guard, New England historically loves moving college left tackles inside to left guard, with the likes of Logan Mankins and Joe Thuney coming to mind. Rhyan, who played with a friend of Belichick in Chip Kelly, started 31 career games at left tackle for the Bruins. His sturdy base, stout anchor, and nuanced hand usage made him a difficult blocker to get around. Although he doesn’t have NFL tackle range in pass protection, Rhyan’s pro-ready technique and functional strength make him an ideal guard fit, while he can play tackle in a pinch. His battle with top-ten pick Kayvon Thibodeaux was impressive.

Teams will remove Jones from their top 100 due to his size, but his film throughout his career with the Cougars is outstanding. At corner, he is a twitched-up coverage player who has the mirroring quickness and long speed to match speedy slot receivers. Jones also had nine career interceptions and over 30 pass breakups, flashing elite closing burst to make plays on the ball. As a returner, he’s electric, with nine career return touchdowns as both a punt and kick returner. The Houston product also has tape as a gadget player on offense. As an all-conference returner and defender, Jones’s four-down versatility screams Foxboro. If he were a few inches taller, he’d be flirting with the overall top 50.

Note: Jones didn’t test in the pre-draft process due to offseason shoulder surgery.

In last year’s draft, the Patriots dipped into the Sooners’ defensive line pipeline with Ronnie Perkins, and Bonitto is another Foxboro fit. Bonitto’s elite athletic testing is all over his tape, excelling as a speed rusher off the edge with excellent bend to run the arc and quickness to slip blockers. He’s also a capable coverage player dropping off the line and as a quarterback spy, making him a potential Kyle Van Noy replacement. Although he’s not a total liability as an edge-setter, there were some concerns about his anchoring ability against the run. Bonitto gained around 15 pounds to show teams he could bring power in that phase to the next level. For a team that needs speed in the front seven, Bonitto certainly checks that box.

Speaking of elite combine testers, few prospects can compete with Woolen in that department. The UTSA product has a rare blend of size and straight-line speed (4.26s), making him an intriguing tools-based prospect for man coverage schemes. With that said, Woolen only has two seasons as a cornerback after converting from wide receiver and is a complete project. You see flashes of ball skills, open-field tackling, and physicality. But his footwork and route anticipation are in the early stages of development. The Pats like to bet on toolsy corners like Woolen, though, and he has tremendous upside.

The Patriots have only selected one player from Happy Valley in Bill Belichick’s 22 seasons with the team. But Smith is arguably the best combination of meeting their size thresholds and elite athleticism in this linebacker class. The Penn State product has superb sideline-to-sideline range, coverage ability, and downhill hit sticks when he triggers on the ball. Smith can be a highly disruptive zone coverage defender with his movement skills and wingspan. There’s also some on and off-the-line versatility there that they can tap into as a coaching staff. Although his take-on technique and processing against the run need seasoning, his size and athleticism suggest that it’s more mental than physical. Smith would be an intriguing developmental prospect for Jerod Mayo.

The entire Georgia Bulldogs defense made the big board. Okay, not the whole defense, but Tindall is the first of many Bulldogs on our list. As the least decorated member of the Georgia front seven, Tindall is an undersized linebacker with eye-popping pursuit speed. The Pats’ defense needs an influx of explosiveness, and Tindall has it in droves, making plays in the open field in a way that nobody on New England’s roster can at its current state. He can also play on the line of scrimmage as an effective interior blitzer and edge rusher. At this point, the knock on Tindall is consistency. He’s uber-talented, but it comes in isolated flashes rather than down-to-down, while Tindall’s processing and ability to sniff out misdirection needs work. If Belichick is reluctant to take the new-age skill set earlier in the draft, Tindall is an intriguing day-two option who would give them a dose of speed.

The word “tweener” gets thrown around during draft season negatively, but Bill Belichick has a knack for finding roles for those types of players. Paschal doesn’t have the ideal traits for an edge rusher (length, flexibility) while also lacking the size to play on the interior. However, his block anticipation, hand fighting, and alignment versatility are as good as it gets. Paschal can line up from a zero technique (over the center) to outside the tackle in a two-point stance. He also is a very instinctual player who clearly understands how to beat/read the blockers in front of him and find the ball. Although he tested well, Paschal isn’t as toolsy as some of the other players at his position in this class. Still, the Kentucky product is a natural football player. My pro comparison for Paschal is Trey Flowers.

If you’re a fan of Florida cornerback Kaiir Elam, Emerson scratches the same itch as a big, physical outside corner with enticing traits for heavy man-coverage and post-safety zone teams. Like Elam, Emerson was battle-tested against SEC wide receiver talent and has that alpha-dog demeanor to go toe-to-toe against top X receivers. His tape is littered with physical bump-and-run coverage with heavy jams and good disruption at the catch point using his length. Emerson also shows good route awareness in zone and is a physical run defender. Although you’ll need to keep him away from the shiftier receivers, Emerson is a quality matchup corner against the big bodies on the outside.

When you watch a 6-8/381-pound right tackle (#78), you want to see if Daniel Faalele can get out his stance quickly in pass pro and move laterally. He checks both boxes.

Really good initial kick out of his stance in pass pro and can easily reach the three-technique. Good stuff. pic.twitter.com/C33fwahAH3

Given his listed height and weight above, you can guess what type of player Faalele is on film. The Trent Brown-like right tackle for the Gophers is a certified mauler with the playing strength you’d expect for a 387-pound human. Although he didn’t test well, Faalele flashes initial quickness out of his stance and moves better than expected. With that said, the calling card here is a mountain of a man overwhelming defenders with people-moving power. There are some major concerns with his pad level and ability to mirror quicker pass-rushers. But Faalele would benefit tremendously from learning the ropes by studying Trent Brown and playing closer to 365 pounds, where Brown’s weight goals are currently. If he can learn to keep his pads down by sitting back in his chair and catching pass rushers, Faalele has the traits to dominate as a run-blocker in a downhill rushing scheme.

Kicking off the position with the first of ten wide receivers on our board, Shakir’s versatility and skillset operating out of the slot offers significant upside in New England’s scheme. Shakir’s 4.43-second 40-yard dash translates as a slot receiver with impressive explosiveness as a ball carrier and terrific hands. He is all over Boise State’s film on crossing routes, seam runs, and designed touches. The Broncos got the ball in his hands in every way possible, from jet sweeps and screens to reps as a wildcat QB. Shakir isn’t a true jitterbug, but he has outstanding contact balance and speed as a ball carrier to elude tacklers. Patriots assistant coach Ross Douglas was very hands-on with Shakir at his Pro Day last month.