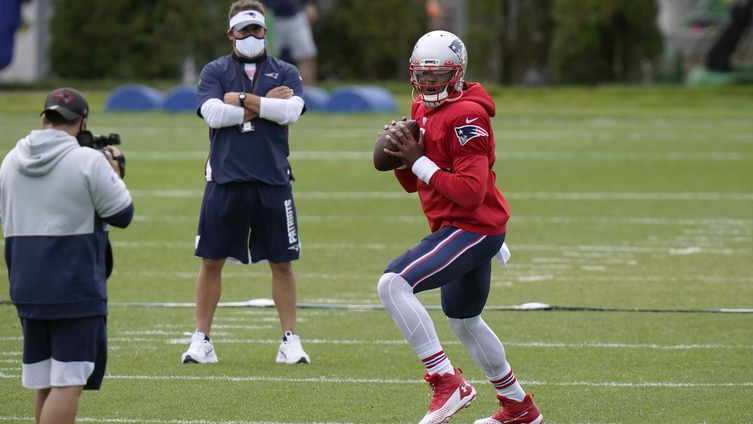 The Patriots held their third full pads practice on the fields behind Gillette Stadium on Thursday morning that saw quarterback Cam Newton start to make his mark on training camp.

Newton went 10-of-16 during team drills, a much larger workload than the two-of-six performance by Jarrett Stidham, and his game was much cleaner than earlier in the week.

The former MVP’s best throw of the day came on a Jakobi Meyers crossing pattern where Newton hit Meyers in stride with a three-quarters release. Later, Newton and Devin Ross connected in a good sign of chemistry as the defender over Ross blitzed, and Newton threw it hot before the blitz got home.

Over the last few practices, Newton’s decision making and ball placement are standing out over both Stidham and Hoyer, as the two other Pats QBs threw three interceptions on Thursday. Newton is putting the ball away from defenders for the most part.

Newton isn’t known for having great accuracy, but he’s had much better control of the football than Stidham and Hoyer, and knows the way to Bill Belichick’s heart: don’t turn it over.

We’ve also seen Newton’s mobility used in a couple of different situations, which reminds us of his athleticism and the potential of this offense with a mobile quarterback under center.

Here’s everything else we saw during Thursday’s two-hour practice session for the Patriots:

– As we mentioned above, Newton controlled the day with a 10-of-16 performance that included timing connections with Jakobi Meyers, Mohamed Sanu, and Devin Ross. He was a little late pulling the trigger on a comebacker to Damiere Byrd, but outside of that play, Newton started to find a rhythm. Again, his ball placement was far superior to Stidham on Thursday.

– Let’s not overreact to a few shaky days from Stidham, but it was notable that after two consecutive interceptions and a ball in the dirt, Newton and Hoyer took most of the reps. Stidham made a good throw working a stick route to Devin Ross, who worked nicely off a linebacker, and made his way through an entire full-field read to check the ball down to a wide-open J.J. Taylor. Stidham’s lingering ball placement issues from college are a concern. His first interception was a bad underthrow on a deep ball intended for Devin Ross, and he seemed to short-arm a few others. We know Stidham has the arm strength to get the ball there, but if he doesn’t clean up the turnovers, it’ll be tough for him to beat out Newton. He has seven interceptions in the last three practices.

– Hoyer went 7-of-16 with an interception after working alone on one field early in practice. He had one of the better throws of the day on a comeback route to Gunner Olszewski that had some steam on it. Hoyer makes some good throws out there but relies on his check-down options too often because he can’t push the ball into tight windows down the field.

– We got some wide receiver/cornerback one-on-ones, and free-agent addition Damiere Byrd had two decisive ones over Jason McCourty and JC Jackson. The route on McCourty was pretty. Byrd got a clean outside release to push vertically up the sideline and then stopped on a dime to lose McCourty on a comeback route. He then battled through some physical coverage by Jackson to beat the Pats corner for a long touchdown, although Jackson might’ve let up after the two battled earlier in the route. Byrd’s game is very similar to Phillip Dorsett, who also had some good one-on-one reps in camp over the years thanks to his speed. Byrd, like Dorsett, is on the smaller side and can get bodied at the top of his routes. But he’s stretching the field a little bit.

– Gunner Olszewski had three wins in one-on-ones, including one over Jonathan Jones. He continues to impress with much-improved route running, explosiveness, and size compared to his rookie season. On one rep, Olszewski burned UDFA Myles Bryant at the top of the route with a little inside fake before breaking off a crisp corner route.

– On the first one-on-one rep, Jakobi Meyers fought through JC Jackson to make a diving catch on an in cut that had his teammates yapping. Meyers’s offseason was a bit of a mystery to some, but he worked with the Route King, Hilton Alexander, who also works out with Mohamed Sanu. Meyers’ smooth route running and feel for middle of the field coverage is still present in his game. He looks like the same guy as last year with a little more confidence, which isn’t a knock.

– Patriots rookie tight end Devin Asiasi wasn’t a major factor during team drills, but we saw what he brings to the table in position drills. Asiasi’s footwork out of his breaks is clean, as he seldom steps underneath himself and gains a good amount of ground out of his break. He also looked smooth running the seam later in the drill. Asiasi is showing well in the first week of camp.

– Fellow rookie tight end Dalton Keene hasn’t had the same success as Asiasi in the passing game, but he had two huge blocks as a run blocker. The first one sprung J.J. Taylor, and the second sealed the edge for Damien Harris to work off-tackle. Keene has the versatility to play both in-line tight end and off the line or in the backfield. He might not produce big receiving numbers as a rookie, but his blocking will be useful for New England’s rushing attack.

– Damien Harris had the best run of the day cutting back off an outside zone run to break a long gainer off the right side. Harris’s vision and feel for his cutback lanes are showing up in practice so far. His skill set is basically Sony Michel, with hopefully some receiving abilities. His burst and breakaway speed are about the same as Michel’s.

– Undrafted rookie J.J. Taylor might be the busiest man at these practices with New England only suiting up three running backs. Taylor is having an up-and-down camp, which isn’t surprising as a rookie. However, unless the Pats’ RB depth doesn’t restore itself before they take on Miami in Week 1, a year on the practice squad might suit him best. He’s an elusive, compact, and versatile player. But there are too many mental errors and drops.

– During practice today, Joe Thuney was limited at times and got beat twice in one-on-ones by Deatrich Wise and Adam Butler. He came back late for goal-line work, so he’s healthy enough to play, but a rare off day after a stellar first two days in pads for the Pats left guard.

– Pats center David Andrews looks ready to go after missing the entire 2019 season with blood clots. His vocal leadership of the offense is evident, and he’s cleaning guys out during goal-line work. He also had decisive wins over Adam Butler and Byron Cowart in one-on-ones.

– Shaq Mason also looks in mid-season form. He didn’t give up any ground in reps against Byron Cowart and Lawrence Guy. Then, he cleared the way for Rex Burkhead during 11-on-11s with one of his thunderous pull blocks. The Pats OL is controlling play in run game periods.

– Rookie Justin Herron is starting to string together some good practices. He’s got some versatility to play guard or tackle and won two reps over John Simon during one-on-ones, including a decisive win. Herron has a challenging road ahead to make the roster in a weird year, but he’s holding up well.

– Hjalte Froholdt put Adam Butler into the ground in one-on-ones and made some nice blocks during team drills. Froholdt can play all three interior line spots and is the top candidate to take on the Ted Karras role.

– Korey Cunningham had the block of the day when he pulled out in front of Damien Harris and cleaned out Terrence Brooks to spring Harris for a touchdown. Cunningham can move, but his technique in his pass sets is sloppy, and he has trouble controlling his large frame.

– Second-year defensive tackle Byron Cowart showed up a few times in today’s practice. He had a couple of “wins” in one-on-ones against Froholdt and Mason and blew up a running play during team drills with some good penetration. After a quiet first two days in pads, Cowart made some noise on Thursday.

– Deatrich Wise is having some good moments. He beat Thuney and Isaiah Wynn in one-on-ones and had a great run stop in Tuesday’s practice that got some praise from Bill Belichick. In a thin group, Wise seems like a tough guy to cut at this point.

– Rookie Cassh Maluia had another active day with a would-be sack and a tackle short of the goal line when fullback Jakob Johnson released into the flat. Maluia’s athleticism is showing up in coverage, and the coaches seem satisfied with his positioning. He flies around the field and makes plays. We’ll see if it translates to games.

– John Simon and Chase Winovich both made two great splash plays on Thursday. Simon set the edge on a jet sweep that was a nice bit of recognition, and Winovich beat Isaiah Wynn cleanly for a would-be sack during 11-on-11s.

– The off-ball linebacker group as a whole is struggling at times to stop the run, as is the interior defensive line. The Pats need more from Ja’Whaun Bentley, who needs to make more impact plays than he has in the first three days of pads.

– UDFA Myles Bryant had an up-and-down day, but his two interceptions and an end-zone pass breakup were the first times that he looked like he belonged on an NFL field. Earlier in practice, he was getting worked over during one-on-ones. I still think Bryant’s best suited to play in a nickel role rather than outside corner, where he can strap himself to tight ends and running backs, but he might not have the size for it.

– Michael Jackson’s length and physicality give him a nice base to work with at corner. He had a nice win in one-on-ones where he smothered Mohamed Sanu’s break and is near the ball a lot. He’s making more plays than second-year cornerback Joejuan Williams, that’s for sure.

– JC Jackson, Jason McCourty, and Jonathan Jones might not win every rep, but they’re highly competitive in everything they do. Every snap is a battle for the Pats wideouts against those three.

– The first truly quiet day for Pats top pick Kyle Dugger, we’ll allow it. He did have some battles with Devin Asiasi and Dalton Keene during one-on-ones that were all highly contested. The rookies had an even split of wins/losses in those scenarios.

– Veteran safety Cody Davis got some praise from special teams captain Matthew Slater on Thursday. Slater pointed out that Davis can really fly and that he brings new ideas to the table. Davis has the makings of a core special teams contributor and backup free safety.

– Not much to report today. No Rohrwasser kicks, and very few Bailey punts. The Patriots went through some up-tempo walkthroughs of punt return and coverage, but that’s about it.