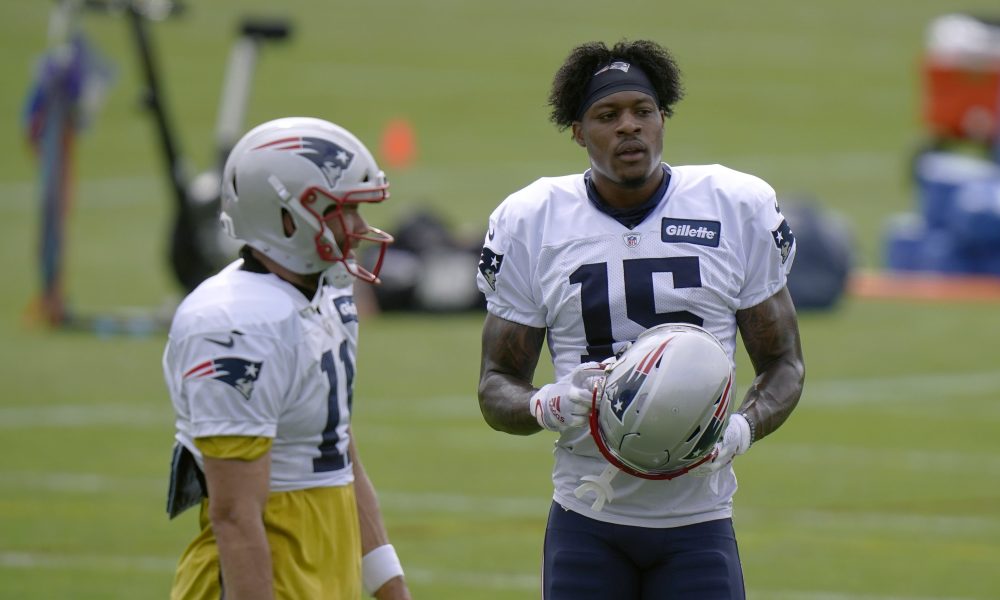 The Patriots practiced in full pads for nearly two hours on Monday morning in a very eventful practice as things start to ramp up in the second week of training camp.

We got an extended look at wide receiver N’Keal Harry, one-on-ones between offensive and defensive players, and a lengthy 11-on-11 period to end practice at a fast pace.

Patriots quarterback Cam Newton once again controlled the reps, and we’ll get to the offense in a bit, but the defense won Monday’s session in a bounce-back day for the front seven.

In my review of the first week of training camp, I expressed my concerns with the turnover the Patriots have in the front seven, mainly at linebacker, where they now lack proven playmakers. If Monday was any indication, the group above would be able to get to the quarterback with help from Bill Belichick and the scheme (stunts, picks, blitzes, etc.).

The defense sacked Newton twice to end the practice in what was a sign of good defense rather than an indictment on the offense, who also made plays in a great battle between the two sides.

Let’s empty the notebook from the Patriots’ seventh practice of training camp:

– Newton had some ups and downs on Monday, but the bright spots are an exciting indicator of what this offense can become once everyone is on the same page. In all, he went 15-of-24 with an interception on a deep post route intended for Damiere Byrd that was thrown into coverage. On a positive note, Newton connected with rookie tight ends Devin Asiasi and Dalton Keene while also finding Harry for two touchdowns. His timing is also improving with Julian Edelman, who had another active day. On the throw to Keene, Newton calmly cycled through his progression to come off his first read, a crosser to Edelman, and find Keene leaking out the backside of the formation for a nice gain. Although he was unsuccessful, Newton threw the ball downfield more today than in any practice session to date, another signal that he’s getting more comfortable in the system. We continue to see his mobility show up as well.

– Jarrett Stidham threw his first live passes in practice since last Thursday during Monday’s session. He went two-for-two on his throws with a well-placed low dart to Devin Ross on a drive route off of play-action. Although it was a very limited sample, Stidham’s arm looks good.

– Brian Hoyer went 13-for-17 during team drills and continues to be the most comfortable quarterback in the Patriots offense. However, the shot plays are few and far between, and one has to wonder if that’s because Hoyer won’t test tight passing windows downfield.

– N’Keal Harry had his best day of camp so far, and maybe his best NFL practice that has been open to the media. He started with a twisting back-shoulder snag against Joejuan Williams in one-on-ones and then capped off the period with a quick post where he showed good physicality at the top of the route to body UDFA Myles Bryant. During team drills, Harry had a great sequence of goal-line work against JC Jackson. First, he beat Jackson with a sweet release to create space for Newton to throw a back-shoulder fade where he held onto the ball despite Jackson’s best efforts to pry it out. Then, he set up Jackson with the same fade release and broke off a quick slant for another touchdown. Along with praise from his coaches for his blocking, Monday’s session once again proves that Harry, if used properly, can be effective. But the coaching staff and Harry himself need to play to his strengths (size, speed).

– Julian Edelman began one-on-one’s with a sweet bending corner route against Jonathan Jones and then broke Myles Bryant’s ankles on a whip route later on in the period. During team drills, we continue to see Edelman’s chemistry with Newton grow. The last two practices were an excellent sign for the Newton-to-Edelman connection.

– Gunner Olszewski continues to look impressive in one-on-one’s (decisive win over JC Jackson) and team drills. His route running and explosiveness in his stems are much-improved from his rookie season.

– Mohamed Sanu has made some plays over the last two days, but his rep against undrafted cornerback D’Angelo Ross was telling. Ross is pretty sticky in coverage, but Sanu beat him in his break but couldn’t run away from Ross to create separation. The Pats wideout flashed some strong hands at the catch point to fight through Ross for a catch, but it’s a little disheartening that he can’t get away from a UDFA cornerback.

– Devin Asiasi continues to be a seven-on-seven king and a difficult cover for the Pats secondary. He shook Terrence Brooks on a dig/crossing route to open up seven-on-sevens during Monday’s practice. His route running, and blocking, continue to impress. Asiasi landed a pretty big block on fellow rookie Caash Maluia on a climb to the second level. His power in his run blocks is better than expected.

– Dalton Keene was more active during team drills. He had the nice catch from Newton mentioned above and beat Joejuan Williams on an out-breaker from inside the formation. He’s still trying to work through his blocking assignments and route tree, but Keene’s athleticism was on display today.

– We didn’t get to see much of the running backs in a practice was light on live running game periods, but Damien Harris continues to show well with his vision between the tackles and decisive north-south running style. He’s been the best back in camp and might be the lead back to open the season depending on injuries.

– Another good showing from the Pats offensive line during one-on-one drills with decisive wins for Isaiah Wynn (over Josh Uche) and Joe Thuney (over Adam Butler). In 22 reps, the defense only won two of them while the offensive line won 13. The others were too close to call.

– Rookie Justin Herron and second-year guard Hjalte Froholdt continue to impress from this perspective. Herron’s foot speed to mirror rushers in passing drills is excellent, and Froholdt is learning how to use his hands and keep himself balanced throughout the rep. The Pats OL depth looks much better after a week-plus of practice.

– One quiet standout so far is defensive end Deatrich Wise. On Monday, Wise beat left tackle Isaiah Wynn cleanly for a would-be sack after registering two sacks and a QB pressure in the final period on Sunday. He also beat Jeraine Eluemunor for one of the defenses two wins in one-on-ones. In a group lacking talented individual pass rushers, Wise is the best the Pats have currently at defeating blocks without significant help from the scheme.

– Adam Butler beat Shaq Mason clean during team drills with a slant rush as the penetrator on a stunt. He knifed he was into the backfield and would have registered a sack. Butler is going to be disruptive in the interior of the Pats defensive line this season.

– Chase Winovich had a strong ending to practice by beating right tackle Jermaine Eluemunor for a would-be sack. Winovich’s burst off his stance, coupled with his ability to bend and turn the corner tightly, make him a difficult guy to block. He got underneath Eluemunor, who couldn’t get his hands reengaged after that.

– Rookie Josh Uche is starting to get the hang of things. He got some pressure rushing off the edge late in practice and was processing his run reads from off the ball with better precision on Monday. Uche is taking a lot of coaching, especially at inside linebacker, where he has some experience but is relatively new to early-down work. He makes plays, but the Pats are looking for more consistency out of the rookie.

– The story for Derek Rivers remains the same: he flashes his pass-rush ability when he’s out there, but needs to stay out there. Rivers beat Korey Cunningham for a quarterback pressure during 11-on-11s and fared well in one-on-ones last week. He’s putting together a nice camp.

– Rookie third-round pick Anfernee Jennings was the other pass-rusher who won a rep over the Pats offensive line, beating Yodny Cajuste. We haven’t seen much of Jennings yet, but a competitive practice on Monday will hopefully lead to more reps later in the week.

– Rookie linebacker Caash Maluia was injured in practice after his collision with Asiasi. It looks like an arm or shoulder issue for Maluia, who is steadily climbing the linebacker depth chart. He’s an instinctive and athletic linebacker who just needs to be moving in the right direction.

– Joejuan Williams looks better against tight ends than he does guarding wide receivers. He had some tight coverage against Asiasi to force an incompletion in 11s that showed what he could do in that role. He’s battling for playing time and a roster spot at either position, but a full transition to safety might make the most sense.

– Trade acquisition Michael Jackson continues to make plays when given an opportunity. He won reps against Edelman and Damiere Byrd in one-on-ones and broke up a pass in team drills. His length and instincts help him play the ball pretty successfully. Hopefully, he doesn’t get buried on the depth chart.

– Fellow veteran free-agent addition Adrian Phillips needs to get on the field. He’s losing ground to Dugger, Brooks, Davis, and even Williams in the battle for Patrick Chung’s snaps. A disappointing camp for him so far.

– Both rookie kicker Justin Rohrwasser and free-agent signing Nick Folk went four-for-four during live kicking drills. Folk is far more consistent than Rohrwasser, whose ball comes off his foot differently every time he kicks. The kicker competition is on.

– Punter Jake Bailey attempted seven punts during a special teams period on Monday. Here were the hang times on those punts (in seconds): 4.56, 4.12, 5.06, 3.73, 4.20, 4.28, 4.49. There’s usually one mishit per practice for Bailey, but most of his kicks are boomers. We’ve now clocked four punts with over five seconds of hang time in the first seven practices.