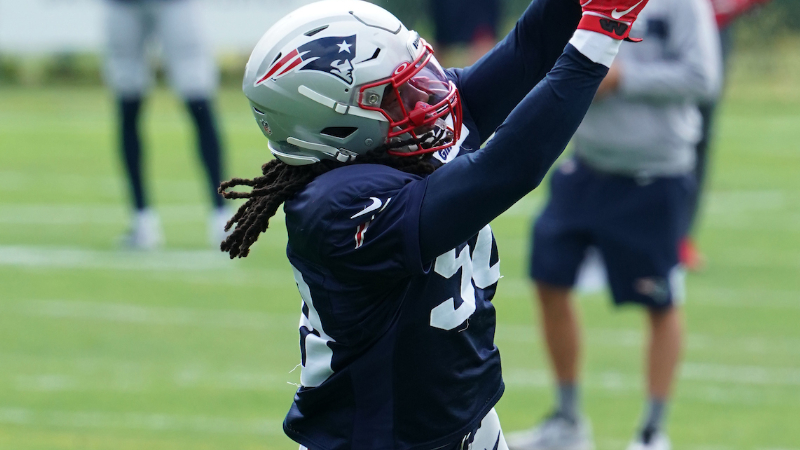 The Patriots practiced in shorts and shells on Wednesday morning with head coach Bill Belichick giving his players a lighter workout after two days of full pads.

Belichick met with the media before Wednesday’s practice and was asked an interesting question: could the Pats incorporate a college-like platoon at quarterback? Maybe.

“I always say I’ll do what I think is best for the team, what gives us the best chance to win,” Belichick said. “Whatever that is, I would certainly consider that.”

The strategy sounds more like something we’d see at Boston College than in Foxboro, but based on the first few days of pads, it’s not a completely outlandish suggestion.

Second-year quarterback Jarrett Stidham, and veteran Brian Hoyer, are understandably ahead of Cam Newton in terms of the playbook. Newton’s ball is coming out with plenty of zip, and he made a few good throws that were dropped by his receivers on Tuesday. Overall, his ball placement has been good, and his arm is strong.

With a couple more weeks to go, Newton could close the gap mentally. But the two QBs with more experience in the Pats system look at home running an offense that’s foreign to Cam.

Stidham, or Hoyer, might open up the entire playbook for Josh McDaniels. However, Newton’s mobility, which was on display a few times this week, adds an element of playmaking that would benefit an offense that’s lacking firepower at the skill positions.

Newton and Stidham could, in theory, platoon, based on the opponent and game situation.

For example, the Pats could install a red zone/short-yardage package for Newton. On Tuesday, the Pats scored three consecutive times in the red zone with Newton under center, and his mobility was a factor on two of those plays. Things like zone or gap read concepts, bootleg actions, and QB draws were extremely successful goal-line and short-yardage calls for Newton in Carolina.

In his last full season in 2018, Newton converted 82 percent of his carries on third and fourth down runs, and the Panthers were 12th in red-zone scoring efficiency (62.1). The Patriots were 26th in red-zone scoring in 2019 at 50 percent and only converted 65 percent of their short-yardage runs. Clearly, Newton’s size and athleticism can help the Pats in those areas.

The hope internally is that either Newton or Stidham will run away with the starting job, and Belichick said, eventually, someone will take starter reps in practice instead of the even distribution we’ve seen so far.

But Newton looks uncomfortable in the offense at times while Stidham doesn’t have the same playmaking qualities as the former MVP. Plus, with no preseason games, the Pats could let both quarterbacks get a shot in September as an extension of the competition. The platoon idea could be the best of both worlds, even if it’s unconventional.

Here are some other notes from the first three days of Patriots practice:

When is the last time a Pats rookie took camp by storm as Dugger has this year? It’s been a while. Dugger made back-to-back interceptions during Wednesday’s practice and got his hands on two more passes after picking off Stidham in Tuesday’s session. He’s playing both deep safety and in the box and flashed a few times as a run defender. The Pats top pick is taking on a full workload of responsibilities, and his versatility is fitting in nicely with what New England likes to do with their safeties; play the deep half or third, cover tight ends and backs, and hold your own against the run.

“Duggs been really good,” defensive captain Devin McCourty said on Tuesday. “I think he does a good job just being around the football whether he’s down, whether he’s on the backend. He’s done a good job of that so far.”

The Patriots desperately need a blue-chip player out of their last few draft classes with so much veteran talent leaving the organization. It’s too early to say Dugger will be of that caliber. But early returns suggest that his ball-hawking instincts, athleticism, and versatility are translating to the NFL game. He’s an exciting young player for New England and could start as soon as Week 1 alongside McCourty at safety.

Leave it to Bill Belichick to turn a Bemidji State cornerback into a viable NFL receiver. Olszewski improved explosiveness, and route-running technique is showing up in the first week of pads. Olszewski beat Stephon Gilmore on a nice comeback route along the sideline on Wednesday, which comes after torching undrafted rookie Myles Bryant on a corner-post pattern the day before. Olszewski gave a little fake at the top of his route like he was breaking on a corner route, then opened it up on the post, leaving Bryant in the dust and had time to wait for the ball from Brian Hoyer.

Olszewski was asked after Wednesday’s practice about playing outside receiver where, despite his smaller stature (6-foot, 170 pounds), he’s making plays in practice.

“I mean, you get to go against Stephon Gilmore, which is always fun,” he said.

Olszewski can get open, whether it’s on quick-hitters from the slot or vertical routes on the outside. The next step for him is consistency after a few drops in Tuesday’s practice. With his punt return skills, it’s looking like Olszewski is going to make the team. He put in work this offseason with Stidham’s crew, and it’s paying dividends now.

Patriots offensive linemen Jermaine Eluemunor continues to factor in heavily at right tackle where the team needs to replace starter Marcus Cannon. Eluemunor had some bad moments in the first two days of full pads, mainly losses to Chase Winovich and Derek Rivers in one-on-ones. He has more of a guard body type, and the concern with him based on his NFL tape was handling speed rushers off the edge like Winovich and Rivers. He held his own during run portions of practice, though, and his power and a firm grip on the right side resembles what they got out of Cannon. The other worry with Eluemunor is conditioning. After joining the Pats last season, the feeling was that he couldn’t get on the field because he wasn’t matching the play speed and endurance of his teammates. Elueumunor addressed that head-on during his Wednesday press conference saying the long offseason, “gave me the opportunity to work more on my conditioning. I wanted to make sure that whatever happened, wherever I ended up, that I didn’t have to worry about my weight.”

4. Yodny Cajuste Shaking Off the Rust After Long Layoff

As for Cajuste, the 2019 third-round pick is having a rough start to camp. He got beat on day one by Rivers during 11-on-11s for a sack of Newton and blew a block on the goal line during red-zone work on Tuesday. After every rep, Cajuste is getting coaching from Carmen Bricillo and Cole Popovich. He’s a work in progress, to put it nicely, but that makes sense given his situation. Cajuste hasn’t been on the field for an organized practice or game since he last played at the University of West Virginia in 2018 after missing his entire rookie season due to injury.

“Honestly, coming off an injury, you are never going to just be back where you left off. There is obviously…you are going to have to work back to get to where you were. So I’m just taking it each day at a time and just getting better and better.” Cajuste told CLNS Media.

The Patriots gush about Cajuste’s skill set thanks to his strong upper-body and quick feet that help him mirror edge rushers at left or right tackle. But it’s going to be a long process for him.

The Patriots’ sturdy insurance policy at all three interior line spots, Ted Karras, is now fighting for a starting job with the Miami Dolphins, which means New England needs to replenish their depth. Froholdt, a fourth-round pick in the 2019 draft, is showing early signs of improvement after a rough rookie camp landed him on injured reserve for the year. A more confident Froholdt is playing faster and is using his hands more aggressively in his pass sets. He won both his reps in one-on-ones during Tuesday’s practice and continues to stack good days together at all three interior line spots. Froholdt is competing for a roster spot with rookie guards Michael Onwenu and Justin Herron, center Tyler Gauthier, and recently signed guard Ben Braden. He is the frontrunner for the Karras role at this early stage.