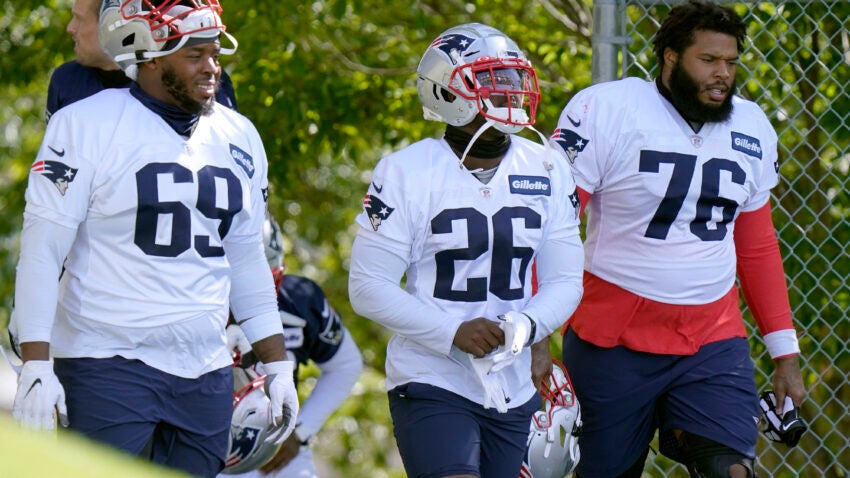 The Patriots went through a nearly two-hour practice in shorts and shells at a much slower pace than what we saw in the last two days on Wednesday.

The intensity picked up considerably in almost game-like practices to start the week, but as Bill Belichick said, we are in the “dog days” of camp, so today was a lighter day.

Although we didn’t see him in full speed drills, Patriots running back Sony Michel is officially off the PUP list after participating in his first training camp session after offseason foot surgery.

Michel, the Pats’ lead back over the last two seasons, looks like he slimmed down in the offseason to become a more explosive and quicker runner. The former first-round pick was splitting reps with 2019 third-round selection Damien Harris during team drills in what will be a fascinating camp battle to watch the rest of the way.

Harris, who essentially red-shirted his rookie season, has been the best running back in Patriots camp through nine practices. His initial burst, north-south running style, and versatility to catch the ball out of the backfield stand out. However, Michel has a similar skill set as a ball carrier and has the experience of leading New England’s backfield in carries over the last two seasons.

Harris has earned the right with a strong camp to get touches this season, but the Patriots will not give up on Michel easily, and the two will likely form a committee with veteran Rex Burkhead.

With Michel’s returns, among others, the Patriots only had four players absent from practice with Devin McCourty, Will Hastings, Beau Allen, and Lamar Miller (PUP) not in attendance. For McCourty, this is simply a veteran’s day off or maintenance day for the 33-year-old team captain.

– Cam Newton had an inconsistent day throwing the ball with an interception and three passes that sailed over his receivers’ heads. In all, he went 10-of-18. On the interception, Newton expected rookie tight end, Dalton Keene, to look for a back-shoulder throw, but Keene was bending his route up the seam instead. Newton threw behind Keene, and right into the hands of Terrence Brooks. Chalk that one up to a miscommunication. As was tradition with Tom Brady in New England, Newton takes a group of pass-catchers to the other field during special teams periods. On Wednesday, that group included Julian Edelman, N’Keal Harry, Mohamed Sanu, Damiere Byrd, and James White. Newton, Edelman, and Sanu put in some extra work after the initial side session was over as well. At this point, getting on the same page is the only thing holding this offense back.

Newton also spoke with the media following Wednesday’s practice. He gave me a very insightful answer to my question about learning and adapting the Patriots playbook to his strengths. Here’s the full transcript courtesy of NESNs Zack Cox:

– Jarrett Stidham went six-for-six in an impressive 7-on-7 series but didn’t participate in full team drills. Stidham opened the series by throwing a beautiful seam ball to tight end Ryan Izzo that went right past Caash Maluia’s ear as the linebacker ran downfield with his back to the quarterback. The second-year quarterback then found N’Keal Harry on a back-shoulder toss with cornerback Michael Jackson in coverage. Stidham’s throws were the best, and the most we’ve seen from him since news broke of his hip injury last Friday. The starting job competition is likely over, but Stidham could make things interesting if he gets back to full-speed drills.

– N’Keal Harry is doing a much better job of using his size and fighting through contact. At 6-3, 225 pounds, Harry needs to win consistently on contested balls and use his big frame to box out defenders at the catch point. We’ve seen him do just that over the last three practices with another back-shoulder grab and an under (or short in-cut) route against Myles Bryant where he shielded the catch point from the much smaller defender. Harry is also putting in tremendous effort as a run blocker. He needs to play big and worry about his releases at the line rather than crisp route breaks. You can’t turn a big-bodied receiver into someone that creates loads of separation with his quickness at the top of the route. Although, it would be nice to see Harry stop stepping underneath himself in his breaks, which he does even during individual drills against air.

– UDFA Jeff Thomas returned to practice as he continues to fight through a leg injury. We still haven’t seen much of anything from Thomas, who has yet to participate in competitive drills, but his speed was on display during a pursuit-angle drill to end practice. He can definitely burn. However, he has a much smaller frame than expected. His ability to fight through contact and shake defenders for clean releases at the line of scrimmage will decide his NFL future.

– Gunner Olszewski had the best play of the day, and it didn’t even come with anyone in coverage. Olszewski reached back with his right hand to snag a one-handed catch that Odell Beckham would’ve been proud of on a throw from Newton. It was sweet.

– Rookie tight end Devin Asiasi was present for practice but was extremely limited in the session. Asiasi pulled up yesterday with an apparent ankle injury and hasn’t participated in full since. However, it doesn’t sound like anything serious, but rather the team taking it easy on the rookie who is wowing people in the building.

– Rookie tight end Dalton Keene was heavily involved in practice with Asiasi limited, and there were some growing pains. Newton had three arrant throws intended for the rookie and an interception targeting Keene up the seam. Keene has shown improvements, his route running is actually better than expected, but he’s still a work in progress in reading out leverages and making post-snap adjustments to his routes. Keene’s role will likely have an H-back flavor, but he’ll also play some in-line tight end.

– Everyone is excited about the rookie tight ends, but Ryan Izzo is quietly showing signs of significant improvements to his game. Izzo looks a little faster and certainly stronger as a run blocker. I’ll have him on the team in my initial 53-man roster projection later this week.

– Rex Burkhead made a terrific diving touchdown catch on a red-zone wheel route on a pass from Newton with rookie Josh Uche in coverage. The play would’ve been reviewed in a game, but it was close enough to call it a catch. Newton was all smiles talking about throwing to Burkhead and James White. Both Pats backs are showing well in the passing game.

– Patriots head coach Bill Belichick had nothing but good things to say about fourth-year defensive end Derek Rivers. Rivers’ career has been a dumpster fire of trips to the injured reserve and struggles to find a role on the game-day roster. However, Belichick pointed out that Rivers looks stronger and more explosive this season. Rivers told me that credit for that goes to strength and conditioning coach Moses Cabrera, who was very hands-on with Rivers during his rehab and offseason workouts at Gillette Stadium. Rivers was among a small group of players allowed in the facility during the COVID-19 shut down because of his injury. The 2017 third-round pick is flashing in camp, beating the Pats tackles for QB pressures and even setting a decent edge against the run. He has a very legitimate chance to make the roster, and even play on game day.

– Rookie linebackers Josh Uche and Anfernee Jennings continue to do more and more each practice. Uche is playing multiple spots in the defense, rushing the passer, playing the run from off the line, and dropping into coverage. We haven’t seen as much from Jennings, but he looks comfortable in space and on the end of the line. Both rookies look like they belong so far.

– The expectation for 2019 second-round pick Joejuan Williams is that he’ll transition from cornerback to safety. Williams is struggling to stand out in a crowded CB room and has the skills to lock down tight ends if the Patriots want to go in that direction. The safety group is also deep, but it’s not as deep without Patrick Chung and Duron Harmon, so maybe Williams will have a better shot there.

– Veteran free-agent addition Adrian Phillips was back at practice on Wednesday and needs to start carving out a role. His experience, mainly playing in a similar role as Chung, and special teams prowess likely mean his roster spot is safe. But if you’re looking for a surprise cut candidate, Phillips isn’t a bad one to guess. At this juncture, he’s getting outplayed by Terrence Brooks, and the Pats will want top pick Kyle Dugger involved. Phillip’s special teams capabilities should save him this season.

– There’s no reason to make a big deal out of it, but I’ve never seen such a disorganized period of punt return team as we saw on Wednesday from a Belichick team. The Pats punt return unit was sent on two laps, first by Belichick, then by special teams coordinator Cam Achord, for having the wrong personnel on the field and lining up incorrectly. It was a mess for a unit that’s usually rock-solid.