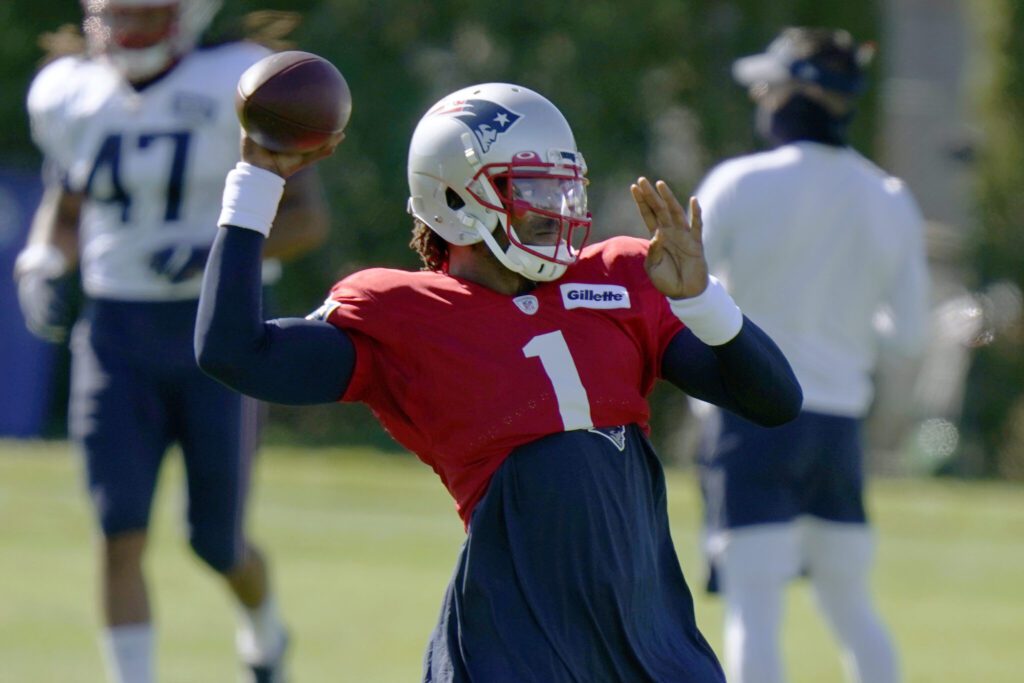 The Patriots practiced in light shells in an up-tempo walkthrough format that lasted roughly an hour and 30 minutes on the fields behind Gillette Stadium.

There wasn’t much to glean from the non-padded session, but Jarrett Stidham’s apparent hip injury that could take several weeks to heal held him out of team drills on Friday.

According to reports, Stidham’s tests came back negative on his ailing hip, but the issue could explain why the Pats quarterback threw seven interceptions in the past three practices.

Stidham short-armed several throws during Thursday’s session, which could’ve been due to the injury, but it also felt like he was losing ground in New England’s quarterback competition regardless. Stidham’s inconsistent ball placement and decision making lead to a lot of peaks and valleys, and turnovers, that are difficult to overcome with veteran QBs on the roster.

McDaniels said that head coach Bill Belichick held Stidham out of practice on Friday but expects the second-year quarterback to participate in the Pats’ next practice on Sunday.

Fisch added that he didn’t notice anything different with Stidham as a result of any injury.

Let’s empty the notebook from a practice that was lacking in intense competition to evaluate the players:

– Cam Newton split non-competitive reps with Brian Hoyer. Still, it was notable that Newton participated in a side session with Julian Edelman and Mohamed Sanu while the rest of the team went through special teams drills. During that period, Brian Hoyer and Jarrett Stidham weren’t with the Newton a group, a first as all three QBs participated in the side sessions earlier in the week. After practice, there were also some interesting tidbits from McDaniels and Fisch on Newton’s progress. Here is their answer to how McDaniel’s is incorporating Newton’s mobility into the offense and how Fisch is working on his throwing mechanics. We saw some Ravens-like schemes at practice with Newton over the last few days:

McDaniels on Newton-specific run schemes: “I would say we’ve drawn a lot of ideas from some of them, the players themselves. Coach Fisch was in LA, he’s been at other places where they did more of this stuff than we have. There’s been some great insight given from Jedd this offseason on things like that. You know, and obviously, you have certain things you have in your package, you have in your playbook, you have in your system that you choose maybe not to use as much during a certain period of time, then you bring it back out when it’s applicable. So, it’s been fun.”

Fisch on Newton’s throwing mechanics: “I think we have to be super cautious when you start dealing with guys’ mechanics at 31 years old, or 30 years old, however old Cam is right now. He’s thrown a lot of footballs in his life. The thing you can work on, and we are trying to work on a lot, is lower body. We’ve always told quarterbacks when you get to the NFL you need to work from your shoulders up and from the waist down. If you do that, then you have a chance to improve your accuracy, you have a chance to improve decision-making, you have a chance to improve your timing. If we can help guys with their footwork, using some more lower body in their throws and then if we can help them mentality in terms of how quickly they can go from one read to another, and really that comes from information and experience, that is kind of where our focus is rather than spending too much time worrying about per se unique throwing mechanics.”

– The odds that Brian Hoyer wins the starting job seem long at this stage; there’s just too much upside in playing Newton or Stidham, but he remains the most comfortable Pats quarterback. The ball comes on time and goes where it should based on the coverage, but it’s difficult to overcome his arm strength limitations. There’s not much to gain out of starting Hoyer.

– Although he wasn’t at practice for a third consecutive day, Pats wide receivers coach Mick Lombardi made an interesting point about N’Keal Harry. Lombardi said the team is trying to get Harry to play to his strengths rather than worry too much about his route running technique:

“A guy like N’Keal, who’s a bigger guy, and all those guys, they work on different things, and each guy has different skill sets. N’Keal’s not gonna run the same things that Julian Edelman’s gonna play just because of their sheer size and their ability. So I think N’Keal has a certain set of skills and a certain set of goals that he’s trying to get to and obtain, and he’s working really hard doing that,” Lombardi said.

– Another notable side session during special teams drills was McDaniels working one-on-one with wide receiver Devin Ross, who is standing out this week. Ross is a smooth route runner with some nice vertical transitions in practice so far and has strong hands to finish through contact at the catch point. We’ve seen the veteran camp star at wide receiver before, last year it was Maurice Harris, so we’ll have to wait and see if Ross is more than that.

– We got a chance to chat with tight ends coach Nick Caley, who had a lot of praise for all of his tight ends, including rookies Devin Asiasi and Dalton Keene. Caley said that they’re throwing a lot at the entire tight end room, including roles in-line, detached from the formation, and in the backfield.

– On Keene, Caley pointed out that he has a diverse skill set and was used a lot of different ways at Virginia Tech. Asked if Keene will play some H-Back this season, Caley said they’re in the process of experimenting with the players to see who can do what best. Keene’s versatility should allow him to rotate through all three alignments that Caley mentioned above.

– Patriots running backs coach Ivan Fears called UDFA J.J. Taylor “Little Dion” Lewis on his video call today. Taylor has similar versatility and elusiveness as Lewis. He has looked good in practice thus far, and is doing a little bit of everything, but is struggling with consistency like most rookies. Taylor has dropped quite a few passes, although his separation quickness is apparent as a receiver.

– Unless something changes drastically, let’s get used to Jermaine Eluemunor at right tackle for the Patriots. He’s getting the longest look of anyone at practice and is almost always first in the rotation.

– Friday’s practice didn’t have any live reps along the line of scrimmage, so we are light on notes there. But I do think the Patriots are missing Beau Allen in the middle of the defense. The team worked out veteran defensive tackle Xavier Williams on Thursday. My guess is a signing to add depth to a thin position is on the horizon.

– Outside linebackers coach Steve Belichick said that he’s picking the brain of veteran John Simon as he transitions to a new position. Belichick was the primary defensive play-caller for New England last season and is on the defensive coordinator track.

– Inside linebackers coach Jerod Mayo called Josh Uche “a very versatile guy” whose “attitude and just overall presence is impressive” during his media availability. Uche’s versatility has been on display during practice, as has his playmaking at times. Uche gives off some Jamie Collins vibes as a guy that’s boom or bust but makes splash plays behind the line of scrimmage.

– Second-year linebacker Terez Hall has a chance to make this team. Hall led the charge at the end of Thursday’s practice on four consecutive goal-line stops. His hit on J.J. Taylor to stop him short of the goal line was eye-popping. Plus, Hall is an athletic linebacker capable of dropping into coverage and playing on special teams. The Pats don’t have much depth at off-ball linebacker, and Hall makes himself valuable as a potential four-down player if he can continue to show well against the run.

– Second-year cornerback Joejuan Williams might want to think about a transition to safety after studying at the position over the offseason. Williams is behind a lot of talent on the cornerback depth chart and is still having some issues staying glued to vertical routes. A move to safety where the Patriots have less depth and Williams wouldn’t need to worry as much about playing on the boundary might help. If he doesn’t get a good jam at the line, he’s not a great turn and run guy for an outside cornerback.

– Myles Bryant continues to build off a strong second-half of practice on Thursday, getting some praise from Belichick for his play in coverage during Friday’s practice. Bryant seems like someone the Pats might want to keep around on the practice squad this season.

– Free-agent addition Cody Davis got some extended reps today at free safety. With his special teams background, he’s another guy that could fill a void left by Nate Ebner, Brandon King (reserve PUP), Brandon Bolden, and others who are no longer in the mix for the 2020 season.

– A heavy dosage of special teams work today did not include a look at rookie kicker Justin Rohrwasser. Rohrwaser hasn’t kicked in front of the media since going three-for-five with one make that banged off the left upright before it went through on Monday. Belichick and special teams coordinator Cam Achord also deflected questions about Rohrwasser, saying all the rookies are in the same boat. At some point, we’ll see Rohrwasser kick again, but it’s starting to get a little interesting that they’re hiding the rookie kicker from the media.

– Julian Edelman fielded some punts for the first time since we started viewing practice. Edelman was a full participant after being limited the last two days and looked like himself. We are not allowed to report on returners that weren’t with the team in 2019, but we can say that Edelman and Gunner Olszewski were at the front of the line.