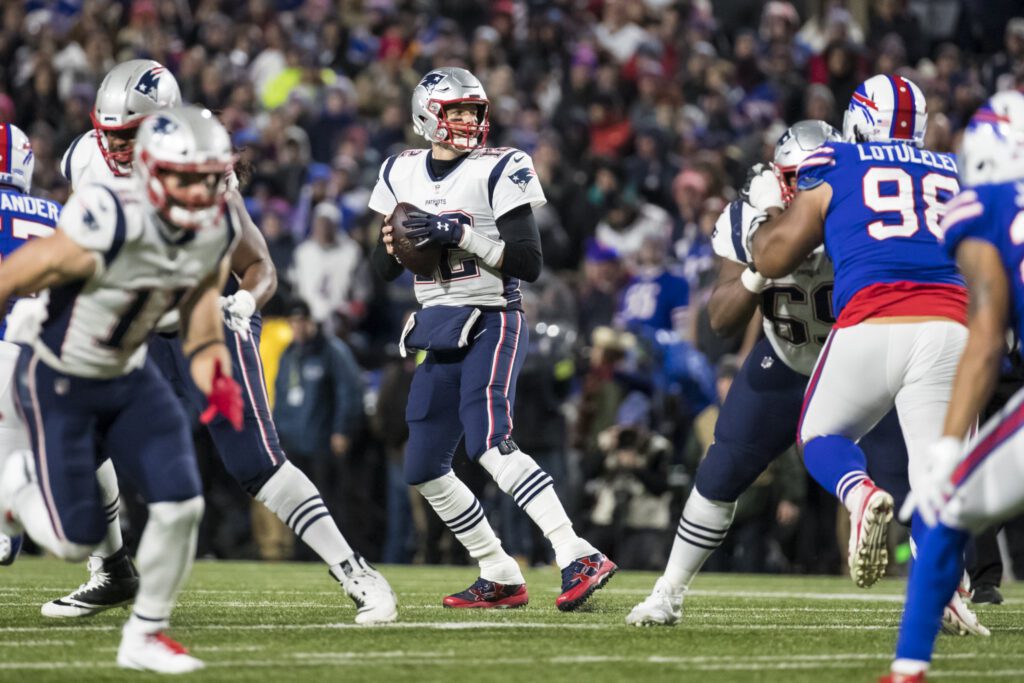 FOXBOROUGH — For the first time in 11 games, the Patriots offense will take the field on Sunday without wide receiver Josh Gordon.

Gordon has been placed on the reserve/commissioner suspended list indefinitely for violating the terms of his conditional reinstatement under the NFL’s substances of abuse policy, the league announced on Thursday.

And in their first game without Gordon, Tom Brady and company will face a Bills defense that’s third in Football Outsiders’ DVOA rankings and held the Pats to 18 points and one offensive touchdown in a 25-6 loss to New England in October.

In defeat, the Buffalo defense was outstanding and stuck to a script that has plagued Brady in the past.

Buffalo played mostly zone coverages and relied on their front four to generate pressure on Brady, which it did.

The Bills rattled Brady by taking away his primary reads and getting home with four rushers holding the Patriots quarterback to an abysmal 39.6 passer rating while under pressure.

When the Patriots kept Brady clean, his passer rating increased considerably to 101.8.

Brady still threw for 324 yards and the Patriots had six drives finish inside the Buffalo 35-yard line, but the Bills defense locked down forcing New England into five field goal attempts.

Below, we’ll go over how the Bills defense gave the Patriots offense problems, and discuss a few ways the Pats can combat the Buffalo blueprint this week:

The Bills’ defensive game plan forced Brady to hold onto the football for an average of 2.70 seconds per attempt, his second-slowest release of the season.

They accomplish that feat by taking Brady’s first read away and forcing him to go to his secondary options.

Here, the Bills drop seven into coverage into a cover-3 zone look, which was their typical coverage on that Monday night. Brady’s first read is to Gronk over the middle, but Buffalo drops both inside linebackers into hook/curl zones underneath Gronk’s route. They also take away Chris Hogan’s curl (second option) and pass off a dig/corner combination in Brady’s second progression. Then, both tackles get beat with power on the edge, and Brady is brought down for the sack.

The Bills only sacked Brady twice, but the rush and coverage worked together all night giving Brady little downfield passing opportunities.

Along those lines, Brady only completed two passes of 20 or more yards in the air, and both of those barely went over that threshold and were highly contested.

On this play, the Patriots leave Gronk in as an extra blocker to set up a potential shot play off of play-action. The Pats send Chris Hogan on a post pattern and Josh Gordon on a dig route over the middle. The Bills play pattern match cover-3 on the backend and take away both of Brady’s options downfield. To make matters worse for Brady, Gronk then loses his block to defensive end Shaq Lawson forcing Brady into scramble mode, and he eventually finds James White over the middle. White gains ten yards on the play, but Buffalo’s defense succeeded in taking away a chunk play.

Brady was able to dink and dunk his way down the field somewhat successfully, but the lack of explosive plays made it difficult for the Patriots offense to get in the end zone.

In the red zone, the Bills pass rush ended multiple scoring chances for the Patriots with pressure.

The Buffalo defense still only rushed four inside the 20, but with seven in coverage, they turned up the creativity with line stunts from their front four.

The Bills flushed Brady out of the pocket on a critical third down play in the red zone by wrapping defensive tackle Kyle Williams around on a game. On the overhead view, you can see that the Bills have four defenders to the Patriots’ three receivers at the top of the screen and also have the numbers advantage at the bottom of the screen in Brady’s second read in the progression. The tight initial coverage forced Brady to hold the ball, and then Williams comes through the line unblocked, and Brady throws the ball in the dirt.

The Bills held the Patriots to just one touchdown on three trips inside the red zone, and the pressure up front was the main reason why.

SUCCESSFUL SCHEMES FOR THE PATRIOTS

Although the Bills limited the Patriots offense to one touchdown, Brady still found some holes in the Buffalo defense in a few different ways.

One approach that was tremendously successful for the Patriots was the play-action passing game as the Pats took advantage of a young and aggressive group of linebackers.

After the game, Patriots offensive coordinator Josh McDaniels noted that the Bills linebackers were coming downhill at the line of scrimmage to stop the run, and that opened up things for New England.

Brady averaged nearly ten yards per pass attempt off of play-action, and his efficiency skyrocketed.

The Patriots offense didn’t hit on very many downfield passing plays, but Brady was able to beat them at the intermediate level at an impressive clip.

McDaniels created openings using play-action to displace the Buffalo linebackers, and then Brady threw directly into the zones that those linebackers should’ve occupied.

On a 29-yard completion to Chris Hogan, the Patriots get both rookie Tremaine Edmunds and Matt Milano moving forward with the play fake. Then, Gronk releases down the seam forcing Milano to slide underneath his route to take away the passing lane. Edmunds gets lost a bit in his drop, and Brady anticipates Hogan crossing behind Edmunds into the vacated area of the field. With Gronk holding Milano, once Hogan gets on the other side of Edmunds, there’s nobody there to prevent the completion or catch and run.

The Patriots’ offense has been up and down this season, but the play-action passing game is one constant that will likely be a big part of their game plan once again on Sunday.

To beat zone coverage, the Patriots went to a number of spacing concepts that flooded and increased the area in which each defender had to cover in their zones.

One of those schemes was a Patriots staple: Hoss Y Juke. In this design, the Patriots are in an empty formation; they send two receivers up each seam, the outside receivers on curls, and a slot receiver, usually Julian Edelman, runs an option route over the middle. Edelman has a few choices here depending on the coverage. If the defense is in man coverage, depending on the defenders’ leverage, he’ll run either a return (cut inside then back to sideline) or a juke route (cut outside then back inside). If its zone, like it is on this play, Edelman finds a soft spot and sits on a “stick” route. Brady and Edelman connected a few times in the game on this passing concept, and Edelman also drew a holding penalty.

On the play above, the Bills are in quarters coverage taking away the seams, but Brady does an excellent job of taking what the defense gave him hitting Edelman for a first down.

It’s not always pretty, but death by a thousand paper cuts might be the best approach for the Patriots on Sunday.

Finally, Patriots running back James White had ten catches for 79 yards back in October, and without Josh Gordon, White has to reemerge as a go-to option for Tom Brady.

Since the last matchup between these two teams, White’s numbers are down across the board in the passing game.

Over the last six games, White’s average yards per game has decreased by 17, and he hasn’t found the end zone through the air since Week 7 in Chicago.

Sticking with the dink and dunk theme, White was a significant part of the Patriots’ success on check-downs and option routes out of the backfield.

On this critical third down play in the fourth quarter, the Bills are in zone coverage once again, and White sneaks underneath the linebacker into the flat. Once White gets the ball, he makes a vicious cut on the linebacker to make the defender miss to pick up the first down.

In the nine Patriots wins this season, White has either touched or been targeted an average of 16.8 times.

In their five losses, that number drops to nine intended plays per game.

Over the last six quarters of football, the Patriots offense has scored 16 points only reaching the end zone once.

And now they face a stingy defense days after losing their top receiver to suspension.

If the Patriots offense wants to get back on track, it will need to improve in the red zone.

Over the last four weeks, the Patriots offense is 30th in the NFL in red zone efficiency (40 percent), and are tied for 28th in goal-to-go situations (50 percent).

Overall, this season, they are 26th in touchdown efficiency in goal-to-go scenarios (63.6 percent).

Despite its success against the Patriots, Buffalo is 28th in the NFL in red zone defense, which means New England has an easier matchup to fix their struggles in the red area.

And scoring inside the 20 is of the utmost importance against a Bills defense that has limited explosive plays all season.