Lazar’s Patriots Gameplan: Expecting a Different Approach From Dolphins This Time Around 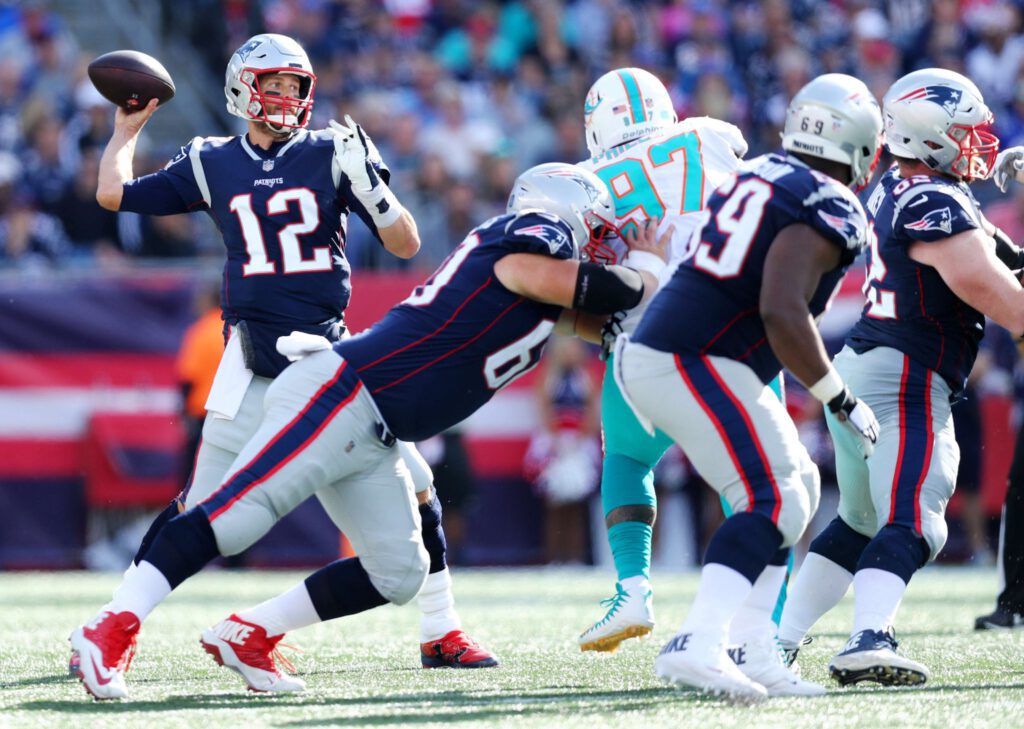 FOXBORO, MA — Everyone knows the Patriots’ recent history when they travel to Miami to take on Dolphins.

Over the last 18 seasons, Tom Brady is 7-9 against the Dolphins on the road, one of four venues that he has a losing record, and the Patriots have lost four out of their last five trips to South Beach.

Although the Patriots would like to reverse that trend, their fate this week is partially in the hands of the Miami coaching staff.

When these two teams met ten weeks ago, it was difficult to find the logic in the Dolphins’ game plan.

Offensively, Miami attacked the Patriots’ defense vertically, with nearly half of Ryan Tannehill’s passes traveling over ten yards in the air, and they only ran three crossing-style patterns to go along with five run-pass options after the New England defense was carved up by those schemes in back-to-back losses early in the season.

And the RPO has been a staple of the Miami offense this season as they’ve ran the concept 13.7 percent of the time this season (fifth in the NFL).

On the defensive side of the ball, the Dolphins abandoned their approach from their Week 14 win last season.

In that matchup, Miami’s game plan was to play aggressive man coverage to throw off the timing of the Patriots offense, especially on third down where the Pats failed to convert a single first down (0-11).

The Dolphins played cover-1 or cover-3 on 50 percent of New England’s plays on offense, jamming the Patriots’ receivers at the line of scrimmage while stacking the box to stop the Patriots’ rushing attack.

However, when these two teams met earlier this season, the Dolphins played mostly off-coverage in their single-high looks and played with two deep safeties 25 percent of the time.

In their win last season, Miami played either cover-2 or quarters only seven times the entire game (16 percent).

The bad news for the Patriots is that recent history would tell you that Gase and the Dolphins always have a better feel for New England the second time around.

“I think it’ll be a different game. It certainly was when we played down there last year. They had a totally different game plan,” said Patriots head coach Bill Belichick.

Below, we’ll go through some of the tape from the Patriots 38-7 win over the Dolphins in Week 4 to explain why Gase will likely revert to the plan that worked in their Monday night upset a year ago:

As stated in the introduction, the Dolphins defense backed off the Patriots offense at the line of scrimmage in September, and that made things easy for New England both in the passing game and on the ground.

With the Miami defensive backs playing off-coverage, the Patriots receivers on the outside had a field day on speed patterns and quick hitters such as slants and comeback routes.

On Phillip Dorsett’s touchdown before the half, Dolphins cornerback Xavien Howard gave the speedy wideout an eight-yard cushion, giving Dorsett a free release at the line of scrimmage. That allowed Dorsett to build up speed on the “blaze” out, and he torches Howard for the score.

Why would the Dolphins defense give a smaller receiver with 4.3 speed that much room to maneuver? That’s a question for Gase and the Miami coaching staff.

Here’s another example with Josh Gordon against Dolphins corner Torry McTyer. This is a third and three in the second half — third and three, and the Miami corners back off. Gordon runs a slant, and Brady hits him for the easiest first down of his life, and Gordon adds insult to injury by breaking two tackles to gain some yards after the catch.

The Dolphins’ decision to play off-coverage, especially against the Patriots’ smaller receivers like Dorsett, is something they have to change this time around if Gase has a clue, which I think he does.

On the ground, the Dolphins defense paired a lot of their off-converges on the perimeter with split safeties on the backend, and the Pats were more than willing to hand the ball off to their running backs who ran for 175 yards in the win.

From the overhead view, you can see that the Dolphins are in a nickel defense with six defenders in the box due to the split-safety coverage. The Patriots are in 11-personnel with Brady in shotgun and White next to him in the backfield. The Pats run a power gap scheme with left guard Joe Thuney pulling in front of White, and the Pats running back, thanks to a devastating cut, goes untouched into the end zone from 22 yards out.

In the second half, the Patriots continued to pound the rock against Miami’s light boxes.

One of the schemes the Patriots used to run all over the Dolphins defense was an outside toss.

Once again, the Dolphins are in a two-deep coverage, but this time they’re in base defense with a standard seven-defender box against the Patriots’ 22-personnel (two RBs, two TEs). With the corners playing off and the safeties back, the Patriots toss the ball to the perimeter to run Michel away from Miami’s strength in the middle of the field. Michel gets great blocks from Gronk (cracking the end), Patterson (cracking the play-side linebacker), and right tackle Marcus Cannon (pulling to the corner), and Michel jogs for a first down.

The Patriots offense averaged six yards per play and coasted to victory thanks to a peculiar game plan from the Dolphins’ coaching staff.

When the Dolphins offense had the ball, Gase appeared to be on the right track, but things went downhill quickly.

On Miami’s first play from scrimmage, the Dolphins ran the Yankee concept for a 22-yard gain to Kenny Stills. Stills crosses with Danny Amendola in the middle of the field, and Tannehill threads the needle with a perfect pass between the Patriots’ zone coverage.

The Dolphins went to similar crossing patterns twice after that, letting the Patriots’ defense off the hook, and on one of those Chip Kelly mesh concepts Tannahill missed a wide open Kenyan Drake on a wheel route (top of the screen).

After that, the Dolphins forgot about the crossing routes and tried to beat the Patriots defense with vertical passing concepts.

One of those concepts, which the Dolphins ran multiple times in the game, was a level’s design that is often associated with the West Coast offense. The idea is to give the quarterback a short, intermediate, and deep option on the play allowing him to make decisions based on the coverage.

On the bottom of the screen, the Dolphins send both receivers on intermediate curl routes. The spacing on these curls presents Tannehill with an option if the Patriots play zone coverage. On the top, Miami sends Stills on a go route, Tannehill’s home run option on the play. Tannehill gets a one-on-one matchup with the Patriots in man coverage, plus the pressure from the pass rush forces a quick decision, and Gilmore is in perfect position forcing an incompletion on third down.

The Dolphins offense tried to take multiple shots downfield, and even their intermediate throws attacked the defense vertically rather than horizontally.

As every coach will tell you, ultimately, Sunday’s game will come down to execution by the players regardless of the game plan or play calls.

The Patriots are a more talented team headed for the playoffs, but Miami is 5-1 at home this season to go along with their recent success against their division rivals at Hard Rock Stadium.

“Their whole defense is playing well, and it seems like they take on a different persona when they’re at home. It’s a lot harder to play them at home. Their record at home is crazy this year,” Patriots right tackle Marcus Cannon told CLNSMedia.com this week.

However, if the Dolphins want to make this a game, they’ll need the right game plan from head coach Adam Gase.

If the Dolphins want to split the season series for the fourth time in the last five seasons, they’ll need to reinvent themselves once again.