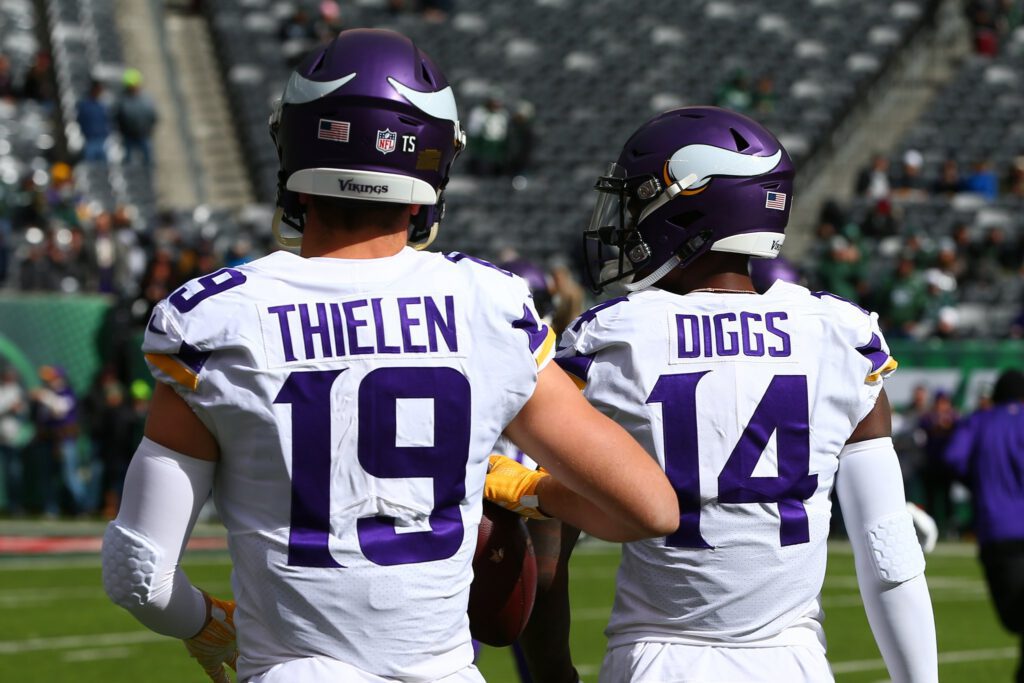 FOXBOROUGH — This week’s matchup between the Patriots and Vikings features arguably the Patriots’ biggest test of the season from a talent and scheme standpoint.

Although their record doesn’t show it, Minnesota has talented players up and down the roster, and head coach Mike Zimmer is one of the best game plan coaches in the league.

The biggest problem for the Patriots defense from a coaching standpoint will be how they defend one of the league’s premier receiver duos in Adam Thielen and Stefon Diggs.

The Vikings duo has the fourth-most receiving yards by teammates in the NFL this season, and have skill sets that compliment each other perfectly.

Both players are terrific route runners, strong at the catch point, and can create yards after the catch.

But Diggs plays mostly on the outside (23.3 percent of snaps in the slot) while Thielen moves around the formation running 57.5 percent of his routes from the slot.

In many ways, the duo is reminiscent of the Steelers’ prolific twosome of Antonio Brown and JuJu Smith-Schuster, and you can expect the Patriots to take a similar approach in defending them on Sunday.

And both teams use receivers in spots that go against the conventional wisdom with the bigger-bodied guys playing mostly on the inside and the smaller receivers as the perimeter threats.

Last season, the Patriots deployed a double-bracket scheme on the Steelers’ duo, dropping seven into coverage and rushing four at quarterback Ben Roethlisberger.

In this scheme, the Patriots secondary doubles the opposing team’s top two wideouts with their “cone” bracket and play man-to-man coverage on the other three pass catchers.

For the four defensive backs in the bracket, the rules are as follows: the corner is responsible for any out-breaking routes along with a straight go route, and the safety takes all in-breaking routes including posts and deep overs. The corner also protects against any double-moves with the safety sitting on those routes over the middle.

“Whatever side or leverage you have, maintain that leverage. And try to do a good job of just literally not giving the quarterback any open throws to get him the ball,” Patriots safety Duron Harmon said.

“You have to study the film to know what you’ll get from different splits to know what to expect and just read his body language to see if he’s running vertical or getting in position to break or go in or out.”

“You have to read his hips and read his pace. When he’s going vertical, it’s a different kind of run than when he’s trying to run an in-cut or something,”

Let’s get to a few examples of how the Patriots used this type of coverage to slow down the Steelers’ passing attack last season:

The Patriots typically went to this coverage in high-leverage situations such as third downs and often used a four-safety package to put a defensive back on Steelers running back Le’Veon Bell.

At this point in the game, Brown was out with a calf injury, so the Patriots bracket both Smith-Schuster (slot) and wideout Martavis Bryant (bottom of the screen). Also, notice that Pittsburgh brings JuJu in motion hoping that will get that away from the bracket coverage. However, Belichick and the Patriots don’t take the bracket off when a receiver goes in motion pre-snap. Instead, the bracket follows that player to his new alignment. This was a terrific play by Harmon, who prevents Roethlisberger from throwing to either his tight end or Smith-Schuster on his first read in the middle of the field. Big Ben comes to his check down, running back Le’Veon Bell, and safety Jordan Richards has good coverage on the play forcing an incompletion on third down.

On this play, the Steelers try to put Smith-Schuster in a bunch set to get him away from the double coverage, but once again that does Pittsburgh no good. Rowe takes the outside responsibility while Harmon breaks on JuJu’s route over the middle and stops him short of the sticks to force Pittsburgh into another punt. Again, Gilmore and McCourty have Bryant bracketed on the bottom of the screen.

The Patriots only had to face Antonio Brown in the first half, but they continued with the game plan moving the second bracket onto Martavis Bryant.

And in that second half, the Patriots held the Steelers to only 99 passing yards.

Although the Vikings offense hasn’t performed up to expectations this season, they’re still an explosive unit that features two of the games premier wide receivers.

Thielen and Diggs will undoubtedly give the Patriots secondary all it can handle on Sunday, but from this perspective, the Pats defense can live with some production from the secondary options in the Minnesota passing game.

Unlike the Steelers last season, the Vikings don’t have a lethal pass-catching back like Le’Veon Bell, and although Kyle Rudolph is a useful player, safety Patrick Chung can match the Minnesota tight end and at least make him work for yardage.

The primary concern for the Patriots should be limiting Thielen and Diggs who can dominate a game if the defense doesn’t alter its game plan to slow down the prolific duo.

In the brackets, expect to see Stephon Gilmore and Devin McCourty on Diggs with Jason McCourty and Duron Harmon tracking Thielen.

When the Patriots need a stop the most, expect to see both Vikings wideouts bracketed on Sunday afternoon.

Special thanks to Zach Dunn for his help on this breakdown.