The Patriots use their first-round pick to get Mac Jones a top weapon. 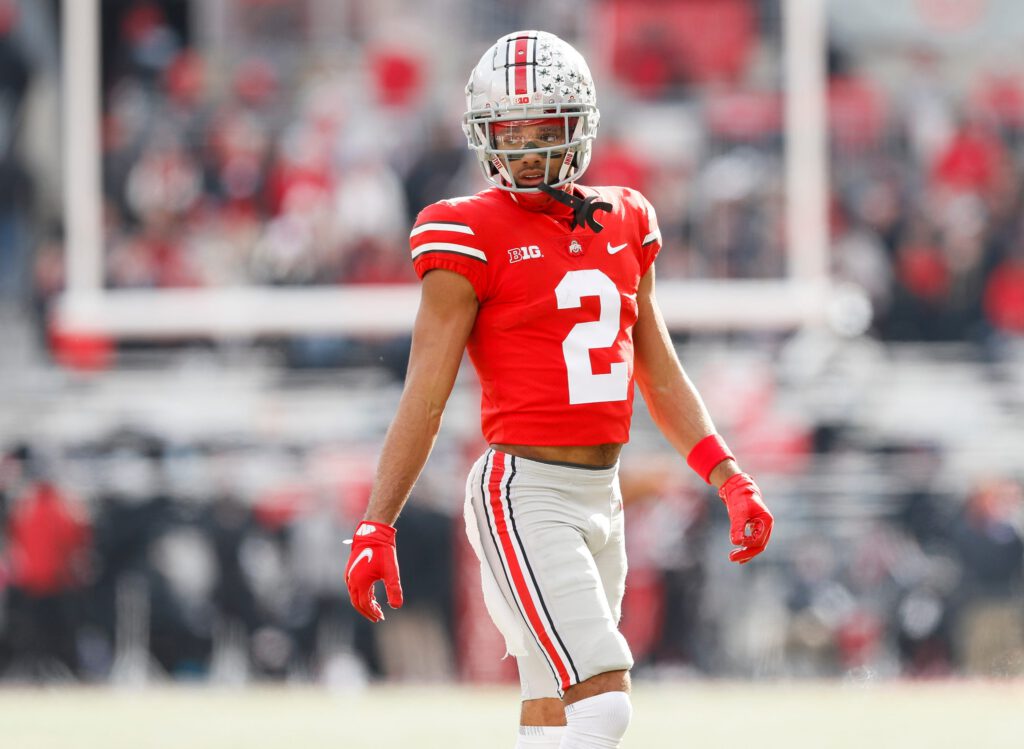 The Patriots could take their draft in a million different directions depending on free agency and how their positional clusters come together on their 2022 NFL Draft board.

Bill Belichick’s staff creates a tiered board to maximize value. If the Pats view two prospects at similar talent levels, but one will be available later than the other, it’s trade down or pick elsewhere.

For example, they were thinking quarterback when New England was on the clock with the 15th pick in the 2021 draft. The Pats could either have Mac Jones or wait for Kyle Trask, Kellen Mond, or Davis Mills in the second round, so they went with Jones to avoid the drop-off.

Finding the sweet spots at wide receiver, cornerback, linebacker, defensive line, and offensive tackle will be critical for the Patriots.

Furthermore, we’ll also consider where the biggest impact is needed in drafting an instant contributor at a position of need.

With that in mind, here’s our first stab at a mock draft for the Patriots in the 2022 NFL Draft:

(Note: We are going with no trades in this version, and maybe all versions. The Patriots will make trades. But I’m far more interested in projecting players rather than trades.)

The possibility that a technician with excellent initial burst off the line and separation quickness of Olave’s caliber falls to the Patriots in the first round is growing. In his most recent mock draft, ESPN’s Todd McShay had Josh McDaniels and the Raiders selecting Olave at no. 22, while The Athletic’s Dane Brugler had the Ohio State product ranked 25th on his top 100 big board.

All in on Chris Olave for the #Patriots if he falls to them at 21. He's the best route-runner in the class. Olave is excellent at selling vertical stems and getting DBs to respect his ability to go deep, then snaps routes off with great precision. No wasted moves, no drifting. pic.twitter.com/13RrnKHqRY

The Patriots need a legitimate number one weapon for Mac Jones, and Olave has an ideal blend of explosiveness and route-running savvy to thrive in New England. Olave is fast, smooth, and sudden throughout the route and creates ample separation. He can make big plays inside (Z) or outside (X), run the vertical route tree, or quicker change of direction routes. He’s gets open, and that’s what they need. Olave is the furthest thing from N’Keal Harry 2.0.

If I made a dollar every time someone said the Patriots need speed at linebacker, I’d have a down payment for my house on Martha’s Vineyard. Yes, the Pats need more athletic linebackers who can go sideline-to-sideline and drop into coverage effectively.

Another rangy day two linebacker target for the #Patriots: UGA LB Quay Walker. At 6-3/240, Walker had a great blend of size and athleticism.

Sideline-to-sideline range, lateral agility, loose/fluid in space to cover TEs up the seam or play over the slot. Great athlete w/size. pic.twitter.com/19CWpUqtUv

But they also don’t want to deviate too far from their mold at the position by selecting an undersized player, so we give you Walker. At a projected 6-3, 240 pounds, the Georgia linebacker has the size and length to take on blockers and hold up at the point of attack. He was also a part of a Bulldogs defense that flies to the ball and has the athleticism to smoothly change directions or run down ball carriers in the open field.

Walker is an excellent compromise for the Patriots at the position; he still has size, but the Georgia linebacker can cover and has plenty of range.

Finding the sweet spot at cornerback is the most challenging task for the Patriots in this year’s draft, and if J.C. Jackson is no longer a Patriot, it becomes an immediate first-round need.

Andrew Booth Jr. or Kyler Gordon would be excellent additions in round one. However, Booth will probably be off the board, and Gordon needs seasoning, so there are questions about his ability to play right away.

Auburn’s Roger McCreay is a sticky man cover corner who fits the mold. But his lack of size probably pushes him out of the first round. Then, the rest of the day-two CBs are in the same tier.

Alabama CB Josh Jobe fits the mold for the #Patriots on day two: physical press-man CB who beats receivers up at the LOS and doesn't panic from out of phase. Can also use his length to attack the catch point downfield and was impressed his awareness to pass off routes in zone. pic.twitter.com/MV7byARU9q

We’ll wait till the third round at cornerback and select Jobe with that in mind. He has his limitations as a big-bodied boundary corner who will draw some penalties and get beat over the top by speedier receivers. But if you manage his matchups to the jump-ball receivers, he has starter-level potential on the outside. Jobe is extremely physical at the line of scrimmage with eye-popping jam power and can battle with receivers downfield at the catch point.

(Note: Since the compensatory picks aren’t out yet, we will go with strictly round numbers from here on out until we get the full draft order)

Addressing the defensive line is another path we could see the Patriots taking earlier in the draft with Jordan Davis (first round) and top-50 prospects Travis Jones and Phiderian Mathis as fits.

But with Christian Barmore, Lawrence Guy, Davon Godchaux, and Deatrich Wise under contract, it’s probably a position where they can get by with the players already rostered.

John Ridgeway is a shade that I am very intrigued by. pic.twitter.com/CovUgGebjq

Plus, adding a true nose tackle like Ridgeway to that group feels like the move. Ridgeway has excellent size (6-4/330 pounds), hand power, and block-eating ability to play over the center in an odd front. He jolts blockers back with his punch power, using his length and upper-body strength to reset the line of scrimmage and occupy blockers.

Although there’s a role for him as a 3-4 DE or over the guards, Godchaux wasn’t as effective on the nose. Ridgeway won’t make many splashy plays on tape, but they need a big body in the middle of the line.

The Pats have two potential roster spots open at wide receiver, with Nelson Agholor, Kendrick Bourne, and Jakobi Meyers most likely on the roster. N’Keal Harry’s days in New England are ending, while Gunner Olszewski is an RFA.

Bolden and Mac had a connection at Alabama on and off the field. The shifty Crimson Tide slot receivers’ route-running also gives off serious Danny Amendola vibes. Bolden has the tools to play in the slot for the Pats and could replace Olszewski as the primary returner. He’s a more natural pass-catcher than Gunner and a better system fit than Harry. Bolden could be a player here.

Depending on the plans with Isaiah Wynn, Trent Brown, and Mike Onwenu, offensive tackle could become a more pressing need with the long-term view on protecting Mac at all costs.

However, it seems unlikely that a rookie would start over whoever remains out of the trio listed above, and the team is high on Justin Herron’s development at left tackle as well.

The tackles available earlier in the draft also aren’t too exciting. For example, first-round prospect Trevor Penning has some warts that showed themselves at the Senior Bowl. He needs to work on his explosiveness coming out of his stance and adjust to the jump-up in competition from Northern Iowa. He’s likely sitting as a rookie, and they have too many needs to take on a project.

Bernhard Reimann has athletic upside, but play strength and rawness make him another project. Darrian Kinnard and Daniel Fallalee don’t always play to their size because of poor pad level and hand placement, leaving us with many options that aren’t franchise tackles.

If there were a projected stud left tackle at 21, we’d be all over it, but that’s not the reality.

The Pats pluck another Michigan offensive lineman after hitting a home run with Onwenu in the sixth round, and Stueber isn’t that different. He’s also a monstrous power run-blocker at 6-6, 327 pounds who can move people at will. Although he has some athletic limitations to play on the left side, he fits New England’s mold at right tackle and has decent awareness and relatively smooth foot in pass protection. Stueber has traits they usually covet.

New England needs to start thinking about life after James White, and Verdell is a natural receiver out of the backfield. He has good hands, enough route-running wiggle to get open as a safety valve, and great elusiveness in the open field to create as a ball carrier.