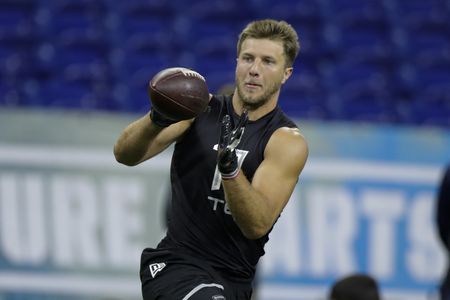 With the NFL Scouting Combine in the rearview, we now have all the information we need to start putting together a board for the Patriots.

Predicting what Bill Belichick will do in the draft is a fool’s errand, but here’s my first stab that should at least highlight prospects that the Patriots are showing interest in this year:

New England puts other needs aside, taking the top defensive end available to replace Trey Flowers a year later with a similar player stylistically. Epenesa might not have the athletic profile of a first-round pick, but Belichick doesn’t care as long as you’re smart, dependable, and can set the edge.

Epenesa has size (280 pounds) and length (6-6), great instincts, violent hand usage, power and processing against the run, and a diverse repertoire of pass-rush moves in his bag. He’s a great fit.

The Patriots are in a weird spot at the tight end position. They need one, desperately. But there are no first-round talents, and they don’t have a second-round pick, which is when the two top guys, Trautman and Notre Dame’s Cole Kmet, will come off the board. They could easily trade out of the first round to add a second, but here, they trade up and go best player available in the first.

Trautman is a mismatch nightmare with the size to win above the rim and the nuance and agility to beat defenders in his routes. Plus, at 6-5 and 255 pounds, he’s an effective in-line blocker with his hand in the ground. He won’t run by many NFL defensive backs, but once he adjusts to the competition, he’ll make plenty of plays in the passing game.

Enormous LB that can glide/scrap – but he knows how to stack/shed blocks too! Watch a few examples of him taking on blockers and keeping himself clean!@nfldraftscout recently mocked Harrison to the #Packers in the 2nd round – 62 overall pic.twitter.com/O1qpWznHLt

The Patriots might have a need at linebacker with Kyle Van Noy and Jamie Collins entering free agency, so we give them Harrison, who is athletic and instinctive. Harrison tested in the elite category at the combine with great explosiveness and agility that shows up on tape. He’s a downhill player that attacks the line of scrimmage in the running game with calculated steps, seldom taking a wrong angle to the ball, and has both sideline-to-sideline range. Most of Harrison’s reps were downhill, but he showed adequate coverage skills at the Senior Bowl. At 246 pounds, Harrison still packs a punch while adding athleticism to the linebacker room. The Patriots could also go offensive line here with either Ezra Cleveland or USC’s Austin Jackson if he’s still available.

South Carolina's Bryan Edwards is a bad man as a ball carrier. Breaks one tackle then throws off another defender on this pop pass. Has game-breaking qualities on schemed plays. #NFLDraft #Patriots pic.twitter.com/LZDfBopHWE

The Patriots get a day two prospect on day three. With all the receiver talent, some will naturally slide, presenting excellent value, and Edwards’s foot injury will likely cause him to fall. He’ll be out the next 2-3 months, but healthy in plenty of time for camp, where he can show off his explosiveness and versatility with enough route-running skill to separate. Edwards’s game and situation remind me of Malcolm Mitchell, hopefully without the long-term injury risk.

The Patriots finally grab a quarterback after the value wasn’t there early in the draft. Gordon has a lightning-fast release and sound footwork in the pocket, two musts for a Pats QB. Yes, he’s coming from an air raid offense, but bringing that background to the pros is less of a worry nowadays.

Kelley was one of the most impressive interviewers at the combine, and he tested well. He could be a useful short-yardage back for the Pats, an area where they’ve struggled recently.

.@HawkeyeFootball S Geno Stone has some of the best instincts in this class. He's got such a big vision head start on so many plays and really trusts what he sees.

Stone is an extremely underrated ball-hawking safety prospect that wins by instinctively arriving at the catch point on time and attacking the ball in the air. He’d be a nice get here.

Bowden played everywhere in Kentucky’s offense, including quarterback, slot receiver, and running back. He’s a gadget player that will need schemed touches to be effective, but he adds value as a ball carrier.

The speedster out of Utah ran a 4.29 at the combine. He’s in the same mold as Jonathan Jones, Keion Crossen, and Ken Webster; put him in the slot and on special teams.

The Pats double-dip at tight end late. Parkinson is massive (6-7, 252), and although you’d like to see more play strength on his tape, he’ll be an effective blocker if he can play lower in his pads.

This might be too late for Runyan, but he’s another undersized tackle prospect that will kick inside to guard at the next level. The Patriots like those converts.