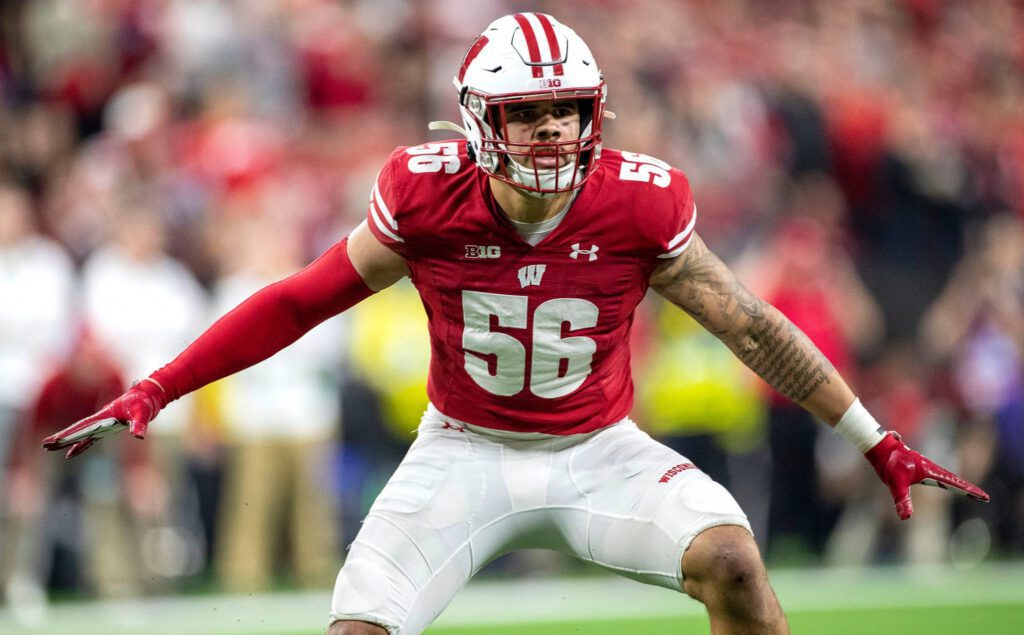 With the first wave of free agency in the books, it’s time to reset the Patriots’ outlook with the NFL Draft less than a month away, barring a delay due to the coronavirus crisis.

The draft is on-schedule for April 23. There will be no public gathering or fan attendance, and it’s unclear how exactly the proceedings will go, but the league wants to continue as planned.

Predicting what Bill Belichick will do in the draft is a fool’s errand, but here’s our second stab that should at least highlight prospects that the Patriots are showing some interest in this year:

The sweet spot of the draft is on day two, where there’s better value at New England’s areas of need, such as edge rusher and tight end, and still plenty of wide receiver talent. The Texans do some wonky things, and this is a fair trade that wouldn’t be close to their worst move of the Bill O’Brien era. The Patriots move down to get in the perfect position for the players they are targeting.

We begin rebuilding a linebacker corps that saw Kyle Van Noy, Jamie Collins, and Elandon Roberts leave in free agency with a Van Noy replica. At the combine, Baun compared himself to the former Pats linebacker, as they both possess the traits to play on or off the line of scrimmage.

Wisconsin's Zack Baun needs to play a versatile role at the next level, can't have him at off-ball linebacker for full games. He's too good of a pass-rusher for that.pic.twitter.com/lHLQ47OQoW

Baun is at his best rushing the passer. He has excellent first-step explosiveness out of a two-point stance, and his quickness is a lot to handle for bigger tackles. He’ll force tackles to respect inside counters and protect against spin moves or arm overs while also developing a nasty cross-chop to rush on the outside. Baun will also look good in New England’s stunts and other defensive line movements. Assuming they’ll be an odd front base again, Baun is a perfect outside linebacker in Bill Belichick’s 3-4 scheme.

The Patriots need to address the tight end position, and by moving down, they’ll position themselves perfectly for Trautman. The Dayton product will make the jump from the FCS to the NFL, which is the only reason he’s not going higher in the draft. He dominated FCS competition with 70 receptions, 916 yards, and 14 touchdowns in his final season for the Flyers. At 6-5, 255 pounds, Trautam is a passable blocker technique-wise with plenty of functional strength to develop into a strong presence in that regard.

As a pass-catcher, Trautman isn’t an explosive route-runner, but he’s got great lateral agility, sets up defenders well, and is smooth out of his breaks. Plus, with his size, he can win above the rim and become an instant red-zone target. When you watch bigger guys, you want them to be fluid athletes, and Trautman passes that test.

My working theory is that the Pats could pass on quarterback until late on day three. The thinking there is to give Jarrett Stidham all the confidence in the world without competition from another young guy heading into 2020. If Stidham isn’t the answer, the Pats can go all-out for a quarterback in 2021.

But for now, Belichick loves competition, and Stidham should too, and Fromm has all the intangible qualities the Patriots look for at quarterback; 42 career starts, team leader, all-around athlete (played basketball and baseball), and a good competitor. He also was given the responsibility to make protection calls at the line and read the defense pre-snap to set his progression.

Fromm made full-field reads all the time at Georgia and was a quick-release distributor in their offense. He functions within the scheme, keeps the offense on time and in-rhythm, and lets his playmakers do the work. Fromm also has clean throwing mechanics, which leads to a catchable ball and nice poise in the pocket to operate under pressure. Teams will question his arm strength and ability to avoid pressure, but the Pats will bank on him being the quarterback he was in his first two seasons at Georgia, not last season, similarly to Jarrett Stidham in the 2019 draft.

The Patriots wait until the third-round at wide receiver due to the depth of this outstanding class. Hill will likely be off some teams’ boards due to his 40-time, a 4.60-second run, but he’s a quick-twitch receiver that plays in the slot and wins with quickness at the top of the route, not speed. Hill has fantastic feet, lateral agility and burst through his breaks, and smarts to read leverages and coverages, creating separation despite an absence of top-end speed.

K.J. Hill isn't the fastest receiver in the class but he's lightning quick and shows great attention to detail. Takes that extra step to get on the CB's toes before he breaks off the route. Extra upfield step runs his man into traffic and makes his break more effective. #Patriots pic.twitter.com/YHIg8wXJ2Y

Hill was essentially the Julian Edelman of the Buckeyes, playing primarily in the slot with an eerily similar route tree to the Pats legend: option routes, quick outs, crossers. He’s excellent at crowding defensive backs and will snap his routes off with sound pacing to set up breaks away from defenders. Hill is the all-time career leader in receptions at Ohio State with 201. He’d eat in the Patriots offense, and could potentially be a long-term replacement for Edelman.

One of the best underdog stories of the draft, Bartch started his career as a tight end for the division three Johnnies before adding 75 pounds to convert to left tackle. Bartch still has excellent foot speed, and his technique is tremendous for a small-school prospect, holding his angles to maintain inside-out leverage while possessing a sturdy base in his pass sets.

St. John’s (MN) OT Ben Bartch (LT #78) has already accepted his invitation to the Senior Bowl. He stands out exactly like you want a Division III prospect to on film.

Bartch dominated division three competition and performed well at the Senior Bowl to prove he belongs. To reach his ceiling, Bartch will need to add more weight and strength to his frame to handle NFL defensive ends, but he’s surprisingly polished with a high football IQ and great technique from his feet to his upper body. The Patriots will stay patient with him as he adjusts into a potential swing tackle option or even a starter down the road.

Fotu is a prototypical Patriots nose tackle. He’s one of the bigger prospects in the draft at 6-5, 330 pounds, but possesses rare quickness and foot speed for his size along with play strength. Fotu has an excellent first step that allows him to penetrate quickly and control his gap, but he can also two-gap due to his upper body strength.

Utah DT Leki Fotu is large and in charge. His pure strength (shown here) and foot quickness (shown throughout vs USC) give him a chance to be drafted quite early in April. #SnapScout pic.twitter.com/aDhqt1RW5h

Fotu dominated against USC this past season, one of the best tapes of any defensive line prospect in this class, flashing that foot quickness and strength throughout the contest. He falls to the fourth-round because old-school nose tackles are a dying breed, and he needs to play with better leverage and block-deconstruction. If he can keep his pads down, he’ll be a disruptive and versatile player that can plug up the A-Gaps.

The Patriots need to rebuild their entire tight end depth chart, so let’s give them a much-needed double dip. Asiasi has excellent film, and it’s a mystery to me why he doesn’t have more buzz. Asiasi had a busy pre-draft process before the coronavirus hit, so NFL teams noticed, but the media hasn’t joined in yet.

Asiasi is a good athlete with an excellent initial burst and enough wiggle in his breaks, leading to a career 15.2 yards per catch average. His vertical push will make him difficult to cover in the seam or on crossers off of play-action, he adjusts and snags the ball outside of frame well, and he has a good feel for reading out underneath zones. He’s more of a flex tight end than an in-line guy, but he displays active feet as a blocker and will run through contact. I could see him going much higher than this if NFL teams see what I see on tape.

Bass or Blankenship? That could be the question for Bill Belichick. The Patriots released veteran kicker Stephen Gostkowski, and my hunch is that Belichick has his eye on a kicker in the draft.

We are mocking Stone to the Patriots once again. The Pats need a developmental free safety and center fielder, and Stone is an extremely underrated ball-haw that wins by instinctively arriving at the catch point before the quarterback expects. He’s undersized, but he’s a potential Duron Harmon replacement.

Although Baun does everything, the Patriots still need to address the off-ball linebacker position. Martin is a potential depth piece as a Belichick-style thumper that can play inside linebacker in a 3-4 and plug up a gap on his own against the run.

We packaged both of our seventh-round picks to move up for a legacy. Runyan is an undersized college tackle that will kick inside to guard, and the Pats love those converts.