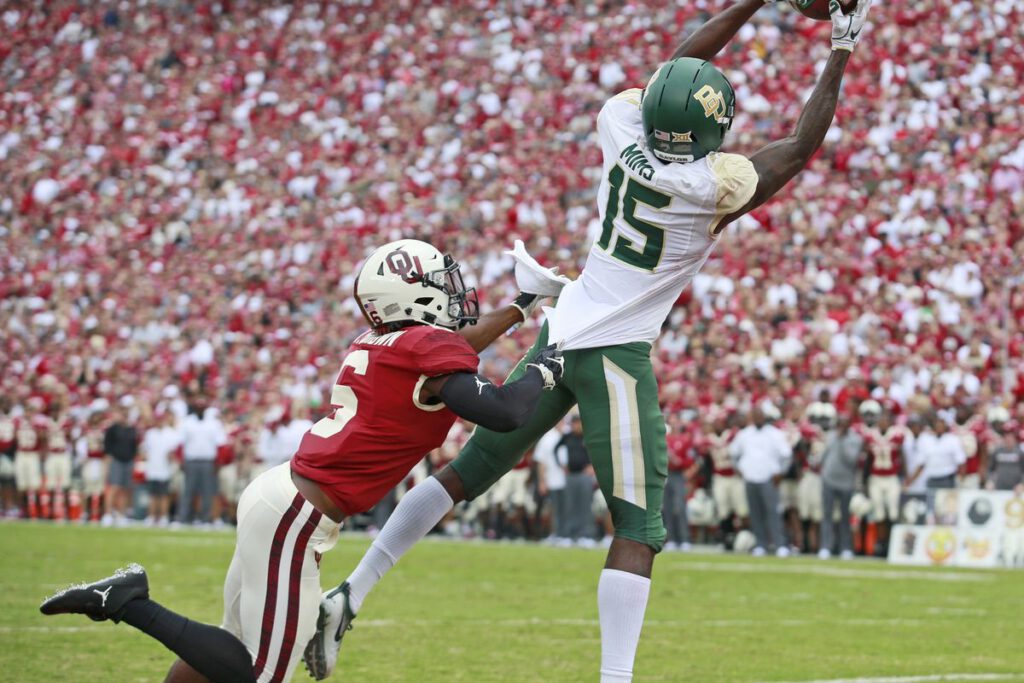 The Patriots’ approach to the draft is becoming widespread across the league for several reasons.

Many teams are run by former Belichick protégés, while others that use the role-based system saw the success and wanted that for themselves.

The Patriots and Belichick put draft prospects into defined roles on their team that they can fill within three years. For example, a scout might find a player that would make a useful third-down running back or number two outside corner.

The system leads to two things: one, a small draft board since it’s hyper-specific, and two, scoffing at those that draft based on need.

However, when you look at this draft, needs on offense become difficult to ignore with a second-year quarterback taking the reins after 20 seasons with Tom Brady.

For Jarrett Stidham and the 2020 Patriots, they need more weapons to give their young quarterback a chance to succeed and the team a chance to compete for the playoffs.

Unless you believe a best-case scenario where N’Keal Harry breaks out, Mohamed Sanu’s ankle injury was the only reason he struggled last year, and Jakobi Meyers can fill out the depth chart with Julian Edelman at the top, then you know they don’t have enough.

And the tight end depth chart currently has two players on it, Matt LaCosse and Ryan Izzo, with a combined 517 career receiving yards.

In a perfect world, the scenario we laid out at wide receiver comes to fruition. But Stidham, like Brady in 2019, will most likely struggle with no significant upgrades to the offensive weaponry.

With that in mind, our third stab at a Patriots mock draft focuses on putting Jarrett Stidham in a position to succeed this season:

The Patriots should get into the second round where the sweet spot for wide receivers, tight ends, and front seven defenders is in this draft. The Bengals get another impact player they desperately need in their rebuild, while the Pats get two picks in the top 65. By consolidating and trading out of the first round, the Pats will also save some cap space, something they need to do since it might be tight for them to afford another large draft class.

Denzel Mims might be the best vertical threat in this years class. Opens up a path to the sideline in his release, throws inside hand to keep jam away, good initial burst and works to stack the CB, uses arm bar to keep the CB away from the catch point. #Patriots pic.twitter.com/rE7XgCHU8A

The Baylor wideout checks every box for the Patriots with an elite athletic profile (even a 6.66-second three-cone), explosive playmaking ability, and jump-ball skills. Mims caught 20 contested balls last year, second-most in the FBS, per Pro Football Focus. His three-cone doesn’t translate fully in his horizontal cuts because he stands too tall in his stems, giving away his breaks, but it’s coachable. The short-area quickness does show up in his vertical transitions, though, especially against off coverage, where Mims creates separation with sudden explosiveness in his breaks on things like post patterns. He also flashes physical route releases against press coverage to stack defense backs on vertical routes, either separating over the top or using his large catch radius to haul in contested grabs. Lastly, Mims is also tough to bring down after the catch and is a physical run blocker, with plenty of bulldozing perimeter blocks on tape. With 66 receptions, 1,020 yards, and 12 touchdowns in his final season at Baylor, Mims is more than an athletic freak and would pair exceptionally well with N’Keal Harry and Julian Edelman.

The Patriots finally land a tight end of the future with a high-upside prospect in Trautman, who showed at the Senior Bowl that he’s ready for a step up in competition from the FCS level. Trautman dominated with 70 receptions, 916 yards, and 14 touchdowns in his final season for the Flyers. At 6-5, 255 pounds, he is an improving run-blocker with plenty of functional strength to develop into a strong presence. But where he offers the most excitement is as a receiver due to fluid vertical breaks and moves to set up defensive backs for downfield cuts. Trautman understands how to attack leverage and take advantage of body positioning, making him a viable jump-ball receiver and red-zone threat along with a big target between the numbers. He should present a matchup problem instantly.

The Pats are set at safety this season, but beyond that, there’s not much youth at the position with Devin McCourty (32) and Patrick Chung (32) aging. Burgess is a prototypical Patriot with excellent work ethic, film study preparation, and versatility at the position. A converted cornerback, he has the man coverage skills to cover tight ends or slot receivers and can play deep as well. Despite only one full year at safety, Burgess has some of the best instincts and field vision to ball-hawk as a deep safety. Burgess will fill on the ball in the running game, takes proper angles when he’s deep, and is a sure tackler. He was also a core special teamer for the Utes playing on four different units. Burgess is a safety/nickel hybrid that could see the field as a rookie due to his intelligence.

Getting into the defensive line class. Already broke down some first-round #Patriots targets, but liking Jordan Elliott for them as a mid-round option. Two-gapper vs run, plays multiple alignments, heavy hands.

New England bolsters its defensive line with some much-needed depth at defensive end. Elliott is a two-gapping specialist with the upper-body strength to lock out and hold the point of attack. Due to his power and short-area burst, Elliott can also penetrate, or one-gap against the run, making him scheme versatile. He plays all over the defensive line on the interior or at five-technique defensive end and has some untapped potential as a pass rusher, showing adequate hand strength and lateral quickness to beat blocks. The production didn’t match the traits for Elliott at Missouri, but he’s a perfect scheme fit for Bill Belichick to unlock a very talented player.

Feet are plenty fast enough to mirror edge rushers, good posture for the most part, and smooth recoveries. #Patriots pic.twitter.com/f6Dth4BRv9

In a typical draft, Charles would probably go 25 picks higher, but his six-game suspension for disciplinary reasons a year ago with limited interview time to vet his off-field issues could lead to a slide. On the tape, he’s a ready-made swing tackle with the potential to start in the future, and could even serve as a backup at guard as well. Charles has excellent foot speed and balance to mirror pass rushers at tackle, showing efficient lateral slides and reactive quickness to match counters. As a run blocker, he creates leverage points with adequate knee bend and flexibility to generate force. Charles’s pass-rush posture, staying back rather than nose-over-toes, needs some work, but he offers all of the necessary traits to be successful.

The Patriots traded up in the fifth round last year for punter Jake Bailey and do so again for another specialist. The fifth round is the sweet spot for special teams. With a flat line from the fifth-round on, it doesn’t offer much value over a sixth or seventh-round selection.

My hunch is that Belichick had his eye on a kicker in the draft when he released the franchise leader in points, Stephen Gostkowski, last month. Blankenship is the kicking prize this year. One kicking coach told me that, on top of his 82.5 career field goal percentage, Blankenship’s consistency stands above the rest. Like a golfer, a kickers’ stroke should look the same every time regardless of distance, and Blankenship’s swing is true every time.

We wrote about Stanley in our deep-dive into the quarterback class. He is a little timid, but he makes good decisions and has a major league arm. There’s long-term backup potential there.

Another tight end target for the #Patriots: Vandy's Jared Pinkney. Not the fastest of the in-line options, but Pinkney can block, has good hands, and was more of a vertical threat in 2018 than 2019.

Angles stem at LB, flattens out and changes speeds to stack, adjust/high-point. pic.twitter.com/sx2ZNBYRBU

NFL Network’s Daniel Jeremiah shared a Belichick scouting handout from 1991 that still holds up today. Under tight end, Belichick wrote that the number one on the depth chart needs to be a receiver first, but the depth guys need to be effective run blockers. Pinkney’s tape is much better than a typical sixth-rounder, but he’s borderline undraftable based on his athletic profile (4.96s 40-yard dash). Still, he’s a bruising in-line blocker that can do just about anything asked of him in the running game.

Most teams will look at Bituli as a slow-footed linebacker that will only play on running downs, but the Pats will see an instinctive run defender that takes on blocks and finishes downhill. At 6-2, 246 pounds, Bituli has the size and skill set the Pats covet at inside linebacker.