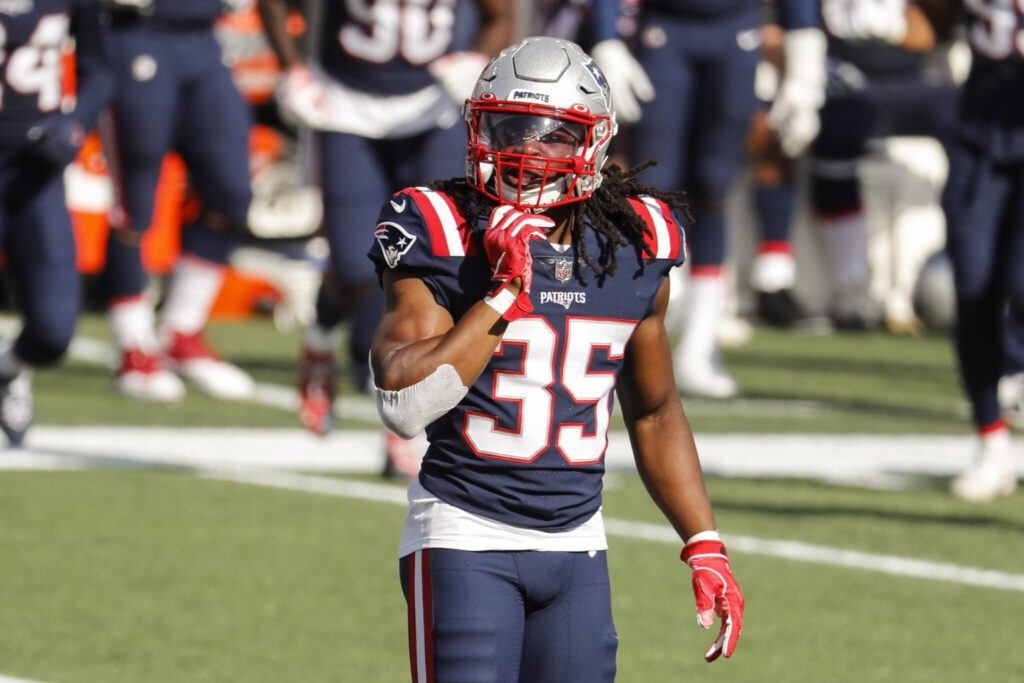 The Patriots are turning the page to the undefeated Las Vegas Raiders, but personnel issues exposed by the Seahawks and quarterback Russell Wilson still linger defensively.

Although Wilson’s five touchdowns passes were the difference, Seattle took advantage of New England’s hybrid defensive backs in the running game, forcing the Pats to play their linebackers in coverage.

When the Patriots had Adrian Phillips or Terrence Brooks in the box, Wilson checked to run plays right at the undersized safeties.

Patriots head coach Bill Belichick countered by keeping linebacker Ja’Whaun Bentley on the field for every defensive snap with veteran Brandon Copeland lining up next to him 30 times.

After playing a combined 56 snaps in the season-opener, defensive backs Joejuan Williams and Terrence Brooks only combined to play 14 plays against Seattle to beef up the run defense.

However, that put Bentley in coverage for a career-high 28 snaps, and like many teams nowadays, the Seahawks found the weakest link and exposed the Pats linebacker in space.

Bentley wasn’t the only culprit, but Wilson was 9-of-10 for 100 passing yards on throws under 20 yards between the numbers while picking up four first downs on scrambles as well.

Bentley registered a 29.4 grade from Pro Football Focus in a disastrous performance, but he was miscast as a space player when he should be attacking the line of scrimmage.

Every defense will struggle to keep up with the Seahawks offense this season, as they can throw and run on you efficiently. Still, they exposed the Pats’ limited depth at linebacker.

The internal answers for the Patriots are rookies Josh Uche and Anfernee Jennings. Both need to continue developing in a positive direction and hopefully make an impact later in the season.

Uche has been inactive in the last two games, something Belichick said was mostly injury-related, with the Pats head coach saying Wednesday that Uche has missed too many in-season practices to be a part of the game plan.

The Michigan standout is a versatile and athletic potential playmaker that could be a significant upgrade. But the more practice time he misses in an abbreviated season, the less likely it is he’ll carve out a full-time role.

As for Jennings, he’s in New England’s goal-line package, and that’s about it, combining for only 11 snaps in the very early stages of his pro career without the benefit of a preseason.

The other option is succumbing to the yards on the ground in favor of more athletes in coverage, which might be the best strategy overall, and we’ll lead off the rest of the notebook with one of those hybrid defensive backs that could be in for a massive uptick in playing time soon:

The Patriots have an emerging playmaker in rookie safety Kyle Dugger, who can also effectively play in the box thanks to his strength and explosiveness. Dugger is a handful to block when he comes downhill at the line of scrimmage and looks good in coverage.

As a blitzer, Dugger’s downhill trigger is mighty impressive as he sent both 330-pound guard Damien Lewis and running back Travis Homer backward, affecting Wilson in the pocket.

Great field awareness from Dugger playing deep on the bottom of the screen. TE sits, is wide open. But is on the backside of Wilson's progression. When Wilson rolls out, Dugger spots the WR crossing behind him & retreats instead of jumping the TE. Saves a Wilson bomb. #Patriots pic.twitter.com/Qx4XyBHAXS

In coverage, Dugger was effective both as a half-field safety and in a robber role rotating down to jump routes over the middle. He’s a little grabby in man coverage but has the physical tools to take tight ends and running backs consistently once he cleans that up.

#Patriots rookie safety Kyle Dugger played 34 snaps on defense this week and that number is only going to go up. Playing off the line over the left tackle here. Reads outside zone and goes right through the combo'ing center to the ball. Dude is a missile. pic.twitter.com/ErrvPuCxEy

Most importantly, Dugger made an eye-popping run stop from weakside linebacker, where he came down to get the double-team off Lawrence Guy and went through the climbing center to the ball.

If he continues to make plays against the run, the 220-pound rookie is a fantastic option to give New England a second-level playmaker. We know he can blitz and drop into coverage, so Dugger just needs to hold up in run defense.

Let’s relax with Jamal Adams and Derwin James comps. But Dugger should be a full-time starter in due time, and it could come as soon as this week. He’s an impact player in the making.

Patriots left tackle Isaiah Wynn spoke to the media following another game where he didn’t allow a pressure in pass protection as he stacks together productive performances.

On 70 pass-blocking snaps, Wynn has yet to allow a quarterback pressure this season. His pass protection skill comes from excellent foot quickness, balance, posture, grip strength, and awareness. Wynn has the foot speed to mirror edge rushers with ease and uses his hands to latch onto pass-rushers; once he gets ahold of you, the rep is over for the defender.

Wynn told CLNS Media that he returned to full strength following two consecutive seasons of injuries during this past offseason, and added muscle to his frame to handle power rushers.

Although his run-blocking was hit or miss last week, Wynn is developing into a stud pass protector and is now beginning to round into first-round pick form.

Patriots quarterback Cam Newton has to be thrilled about the protection he is getting, as his offensive line is producing the third-lowest pressure rate in the league through Week 2 (18.8).

However, tougher tests are ahead for the Patriots, with the Seahawks and Dolphins making up two of the NFL’s worst pass-rushing units. We’ll see if it continues against stiffer competition.

3. Sony Michel Should Worry About His Job Security

Patriots running back Sony Michel is in jeopardy of falling down the depth chart, and that comes from a scribe that is on the record multiple times in support of the 2018 first-round pick.

We can now quantify Michel’s rushing productivity over expectation based on NextGen Stats’s model, and the Pats running back is quite literally getting what is blocked and nothing more.

Michel’s rushing yards over expectation per attempt is sitting at -0.1, 23rd among 44 running backs, and he has yet to break a single tackle on his 17 rush attempts this season. He’s not bringing anything extra to the table and is a zero as a receiver, while the Pats need a dynamic playmaker at the position to help Newton in the running game.

Here’s a great example of where Michel is struggling on tape. The Patriots are blocking power to the right, with Seattle shifting their line over before the snap to take back the numbers to the play side. Michel makes a great read to cut backside where a huge hole develops between Wynn and Onwenu. However, once in the hole, he decides to cut into two defenders’ leverage rather than run vertically upfield at the deep safety. Bruce Irvin tackles him on the way through the line for a third-yard gain on a play where there was way more available.

Patriots second-year running back Damien Harris could be back next week following a stint on injured reserve, and his camp performance indicates that he’ll be more explosive than Michel.

Harris was bursting through the hole Michel tip-toed through above while avoiding defenders instead of running into them. Plus, he adds a lot more as a receiver in the passing game.

When Harris returns, it’s a matter of when, not if he’ll overtake Michel in New England’s backfield.

NextGen also tracks yards after the catch over expectation for receivers, helping us assess N’Keal Harry’s struggles on schemed touches.

Currently, Next Gen’s model suggests that Harry’s issues avoiding tackles, he only has one forced missed tackle on 13 touches, is more about the situation than shortcomings on his part. He’s averaging 0.2 yards after the catch over expectation in the first two games of the season.

After reviewing those schemed touches, Harry struggles to transition from moving laterally to vertically upfield before the defenders close on him in the flat. Odds are it’s a little on Harry and a little on the scheme to get upfield sooner. Guys are closing on him quickly, and at his size, he’s not going to make many defenders miss in a phone booth like he’s Julian Edelman.

Harry needs to react to oncoming defenders sooner and use his size to run over smaller defensive backs, but they need to get it in his hands faster so he can get a head of steam.

Based on the metrics, Harry isn’t adding value to those schemed plays, but he’s also not subtractive either, meaning some of the blame is on the scheme and timing of the play.