Did spring standouts do enough to make the initial roster? 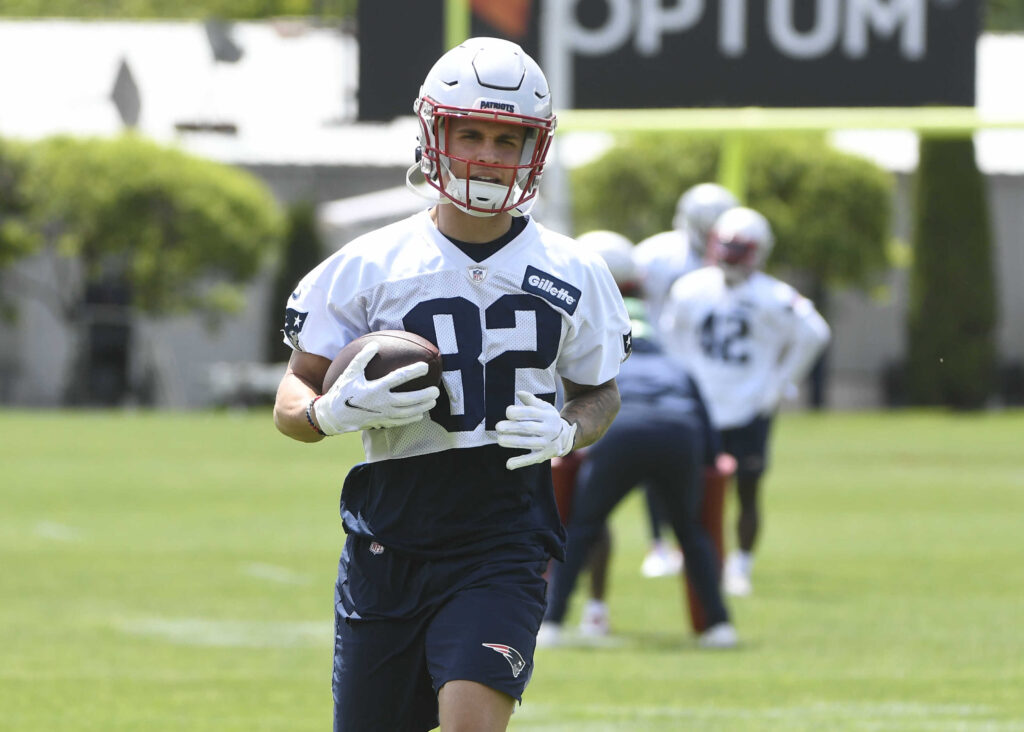 Cutting down an NFL roster with significant offseason turnover is difficult, but that’s the nature of the beast for the Patriots, who head into the summer with plenty of unanswered questions.

Although spring practices shed some light on things, Bill Belichick still needs to decide how to proceed in a few key areas. First, what will the Pats do with underperforming players from recent draft classes such as N’Keal Harry, Joejuan Williams, tight ends Devin Asiasi and Dalton Keene, and Anfernee Jennings?

With Pro Bowler J.C. Jackson now in Los Angeles, New England is also rebuilding their cornerback room with two rookies and familiar faces from the past. Plus, there are always breakout camp stars like Tre Nixon who make a solid initial push but need to keep the momentum rolling through padded practices and preseason games. Lastly, will the Pats roster an undrafted rookie for a 19th consecutive season?

After taking in four spring practices, here’s our initial stab at a 53-man roster projection for the Patriots:

One thing the Patriots can hang their hat on at the moment is that they found their quarterback in Mac Jones. Jones is doing all the right things this offseason to get his body ready for the year-two leap, showing off an improved deep ball this spring. We also liked what we saw from Zappe in the offseason. The ball comes out of his hand with decent zip, he makes quick decisions, and as Jones did, is grasping the playbook quickly as a rookie. Knowing that 36-year-old Brian Hoyer isn’t fleeing for another team, the Patriots release their veteran backup initially to save a roster spot while paying him his full salary on the practice squad. New England keeps its de facto assistant QB coach around while protecting a player subject to waivers on the 53.

The Patriots arguably have six NFL-caliber running backs on their roster, but it’s unlike Belichick to carry more than four. After barely participating in the spring sessions, James White is still in an uphill battle to be ready for the season after last season’s significant hip injury and surgery. White would be eligible to return after six weeks if he starts the season on PUP. In the meantime, the Pats keep both rookie running backs on the active roster, with the writing on the wall for J.J. Taylor after the two day-three selections. Strong is an explosive athlete who will be a factor as a kick returner while he’s groomed for the receiving back role. Harris, on the other hand, is built like a freight train and looks reliable enough to serve as an early-down backup in year one. If White is ready for the start of the season, Strong or Harris become Foxboro Flu candidates as rookie redshirts. Taylor is a good football player who might get a shot on another team’s roster. The Pats would be thrilled to retain him on the practice squad if not. Also, remember that Ty Montgomery (listed as a WR) gives them more insurance at RB.

Based on what we saw this spring, the Patriots are moving away from the fullback position and traditional two-back formations. However, expect to see Jonnu Smith used in an H-Back capacity wth some fullback-like alignments this season. Carrying only two tight ends, especially with Henry’s injury history, is a little surprising. But the Pats have better football players worthy of roster spots elsewhere, and everyone is eligible for the practice squad with three game-day elevations again this year. Asiasi might get a look elsewhere, but the Patriots can look in-house or poach from other rosters to build out their depth with the option to elevate a tight end from the practice squad for game day.

The wide receiver depth chart is the most intriguing camp battle of the summer. First, will rookie Tyquan Thornton and second-year breakout candidate Tre Nixon make Nelson Agholor expendable to earn Nixon a roster spot? Nixon’s spring was extremely impressive, but we’ve often seen speedy wideouts disappear in the summer with contact. We need to see Nixon continue to ball out in pads to make the team. Between him and Thornton, Agholor could become a trade chip. The best way to describe minicamp for 2019 first-round pick N’Keal Harry was awkward. He didn’t want to be there, the team didn’t want to waste reps on him, and it wouldn’t be fair to either side to keep Harry for another season. Everyone needs to move on.

The Patriots always keep a significant number of offensive linemen, with nine linemen making it last year and nine projected here. Although Isaiah Wynn’s situation garners attention, the Pats already have two new starters at guard and are flipping sides with their tackles. As we theorized on Patriots Beat, it’s possible that the Pats moved Wynn to right tackle knowing he’s not in the long-term plans, therefore only displacing one spot with Trent Brown working full-time at left tackle in camp. But it seems like a lot of moving parts in one offseason with a new offensive coaching staff and potentially a significant system overhaul. Right now, the smart money is on Wynn remaining a Patriot for the time being. Until we see the offensive linemen in pads, the incumbents keep their roster spots. If one of the late-round rookies can get back on the field, they’d be our favorites to push some of the backup options off the roster.

The defensive line is a similar story to the offensive line. Without real contact in the spring, it’s hard to unseat any incumbents. Anderson’s re-worked contract signals that the team is hopeful that he’ll contribute after sitting out last season due to injury, while Carl Davis is the only true backup nose tackle the Pats have on the 90-man roster. This scribe is interested in seeing rookies Sam Roberts and LaBryan Ray in pads. Ray, in particular, is a monster even in shorts and a T-Shirt. If his technique holds up, he has intriguing physical tools to work with as a base 3-4 defensive end. Roberts also looked the part physically, so we’ll see how both rookies look this summer. Ekuale’s two-game suspension to begin the season improves the odds for Roberts or Ray to stick.

Based on spring practices, the young players in this group finally get a chance to prove themselves after injuries and lack of opportunity to start their careers. The Patriots have big plans in store for Uche and Perkins this season, while Jennings was also running at times with the starters during minicamp. Jennings seems like the forgotten one here, but if the Pats continue to feature odd fronts with stand-up outside linebackers, they’ll need to maintain depth at edge defender. My read on the situation is that the team hasn’t forgotten about Jennings, unlike some outside the organization.

There aren’t any real surprises here as the Patriots rebuild at linebacker by moving on, at least for now, from Dont’a Hightower, Kyle Van Noy, and Jamie Collins. McMillian, followed by Wilson, is the early frontrunner to play alongside Bentley when the Pats put two inside ‘backers on the field at once. But, remember, the team will lean heavily on its hybrid safeties to play at the second level this season. McGrone was still running with the scout team in the spring, but if the internal praise is warranted, that could change quickly this summer. Although it’s raw, this group did feel more athletic during spring practices than in recent years. We are excited to see them unleash McGrone when training camp rolls around.

Without a shutdown defender among them, the best way for the Patriots to get through the season at cornerback is to mix and match their way through the season. Mills, Mitchell, and Jon Jones (slot) are the early favorites to start. But rookie Jack Jones is on the fast track to contribute in year one, and the Pats defense would look much better if the fourth-rounder turned out to be a hidden gem. It seems unlikely, but the team could net a late-round pick for Joejuan Williams in a trade, who, along with Harry, is unnecessary deadweight at this point. The Pats cut Bryant last year and retained him on the practice squad, so we expect them to take the chance again in favor of Wade, who has more of an NFL frame.

The strength of the Patriots’ defense this season is probably their safeties. McCourty returns in centerfield to lead a group of versatile chess pieces with playmaking qualities. The hope is that Philips and Peppers will handle coverage responsibilities on tight ends more this season, allowing Dugger to play as a free defender and ball-hawk in the middle of the field. Dugger has impact player potential in that role, and the Pats need him to have his freedom to cause negative plays for opposing offenses. We could see Bledsoe working his way onto the roster with an injury or trade. His teammates are impressed with his football IQ, and he can also contribute on special teams. For now, they stick with the four locks.

The Patriots continue to squeeze out roster spots by releasing Folk, as they did last year, to elevate him from the practice squad until a roster spot opens up. Folk, like Hoyer, isn’t subject to waivers and isn’t skipping town. There’s little risk in releasing him initially. At punter, Jake Bailey made it clear that there’s no competition. He looked like his All-Pro self after getting healthy this offseason.

We all know the drill with the kick coverage specialists by now. They’ll be around.