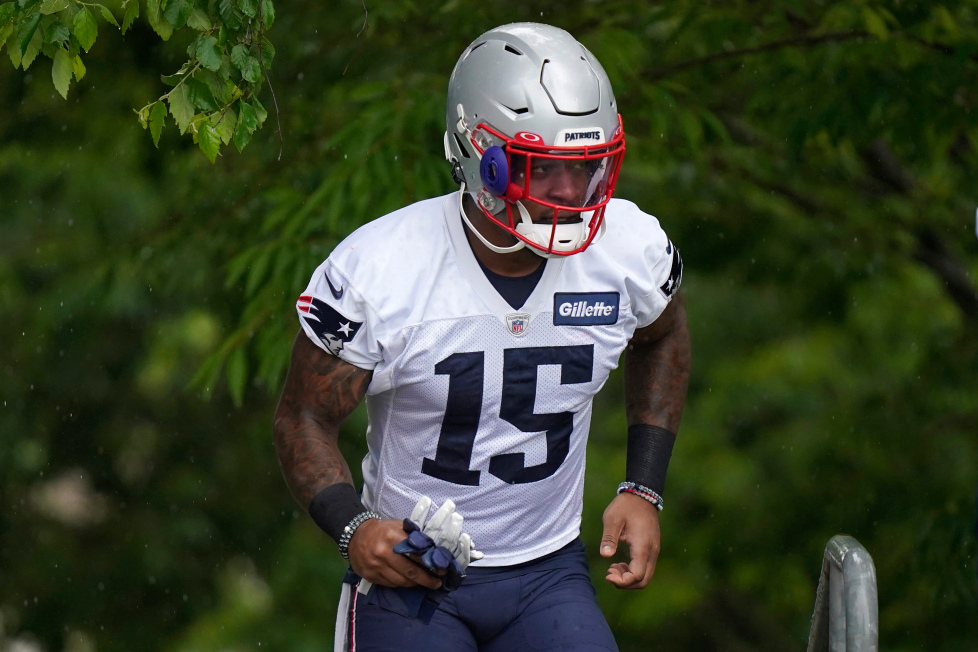 Patriots head coach Bill Belichick has both the blessing of a deep roster and the curse of whittling down a very competitive team to 53 players by the August 31 deadline.

Although there’s a long way to go until the full roster cutdown, New England’s three-day minicamp gave us a snapshot of where the team is headed in certain areas on their roster.

There’s a distinct group of young players that are pro talents but could find themselves either cut or traded if things don’t go their way this summer after a busy offseason.

Stidham, Michel, Winovich, and Harry qualify as trade candidates rather than outright cuts. Still, it’s hard to envision a scenario where all eight of those players make the initial roster.

First-round pick Mac Jones proved this spring that he’s ready to be an NFL backup, and things are trending towards Jones starting sooner rather than later. Although Newton is the starter now, Jones will get a chance in the future, making Stidham dead weight. Belichick has carried just two QBs initially nine times, and a rookie backed up Tom Brady three times (Hoyer in 2009, Garoppolo in 2014, and Stidham in 2019), so there’s precedent here for Jones. If Stidham plays well in the preseason, the Pats should be able to get something in return. And if the league allows veterans to sign to the practice squad again, Hoyer could be back as a scout team quarterback and tutor for Jones.

Six running backs is a lot. If rookie Rhamondre Stevenson has a strong summer, it could push Michel to the trade block. However, Stevenson was coming along slowly in minicamp, and we all know how the Pats usually redshirt rookie backs. The Patriots could try to cut Bolden and then re-sign him once they place another player on IR, but they tried that once and lost him to Miami. Plus, Bolden looked terrific in minicamp as a pass-catcher out of the backfield. As for Taylor, his explosiveness and versatility has White successor written all over it, making him a tough cut. Although it feels like too many running backs, it’s hard to walk away from any of these players.

Yes, the Patriots cut their lone fullback on the roster in Johnson. Johnson is a solid lead blocker, and when the Pats were basing out of 21 personnel, a fullback was necessary. However, based on minicamp and their offseason signings, 12 personnel is the new en vogue grouping. Josh McDaniels was already rolling out multiple tight ends this past week, acclimating everyone to having two-plus tight ends on the field at once. Keene edges out Johnson due to his versatility to play either tight end or H-Back that can disguise as a fullback if needed. Plus, the Pats invested more in Keene. Get ready for a TE party in New England.

Arguably the biggest question mark for the Patriots this summer outside of quarterback is what the team will do with 2019 first-round pick N’Keal Harry? Harry is slimmed down and looking to carve out a role as an outside receiver. He made a handful of catches on hitch routes during team drills in minicamp, but overall, he lacks “wow” moments and consistent separation. The Pats could move on by trading Harry, freeing up a spot for camp standout Isaiah Zuber or Ernie Adams’s guy, Tre Nixon. But Zuber will need to show that these flashes we saw in the spring will carry over to real football when the pads go on before he earns a spot. Speedy receivers should shine in OTAs and minicamp, where the coverage is far less physical. If Zuber performs well in August, we’ll need to take a long look at Harry’s situation. I could see a few of the “cuts” returning on the practice squad here.

Although I could see them going with just seven to start, the Patriots tend to favor depth along the offensive line. Sherman gets the last spot because of his versatility to line up at either tackle or guard, whereas Cunningham and Cajuste are only tackles. Plus, the Patriots are on a hot streak when it comes to hitting on day-three linemen. We’ll see how he looks in camp, but Sherman’s tape at Colorado was good enough to give him a chance to develop. The Pats will undoubtedly stash multiple offensive linemen on the practice squad as well.

The Patriots will base out of a 3-4 front with depth at linebacker as the focus, so they don’t necessarily need a sixth body. Barmore was terrific in minicamp for a rookie, with a handful of pressures as an interior rusher. Guy, Wise, Godchaux, and Anderson are solid vets who all have obvious roles to fill immediately. The more you see this group, the more you like the potential, especially if Barmore reaches his ceiling.

What a difference a year makes. Judon and Van Noy were studs in minicamp playing as stand-up outside linebackers. Winovich will factor in as a situational pass-rusher, and Hightower and Uche will get chances to rush the passer as well, making this a very strong group. Perkins, like most rookies, was a bit overwhelmed in minicamp, but there’s nothing wrong with him redshirting this season with the veterans on the team. I almost cut Jennings, but parting with a third-round pick in his second season seems a bit hasty, and they can get him on by releasing three off-ball linebackers who don’t have Jennings’s potential.

Hightower, Van Noy, and Uche will be the chess pieces in Bill Belichick’s defense. All three can play on and off the line at a high level, which gives the Patriots all sorts of options. Hall is someone you wish they could keep around, and in other years, McMillan would be a core special teamer/reserve linebacker type. But it’s difficult to see them making the roster over players with as much experience as Bentley and recent high draft picks. Hall is a better athlete than Bentley, which could push him off the roster, but Bentley is one of the core guys in that locker room.

Assuming the Patriots work something out with Stephon Gilmore, this group is set in stone sans Williams. At this point, Williams is making the team because he was the 45th overall pick in 2019. Maybe it’s a good thing that he doesn’t have much on-ball production in these practices, but Michael Jackson Sr. stood out more in coverage both in minicamp and in training camp last summer. Maybe Williams is shutting down his side, so quarterbacks are throwing elsewhere? That’s the positive spin on it. Jackson is simply around the ball more than Williams, but until Williams is a big-time liability out there, he’ll continue to get chances.

No major surprises. All four of the players making the roster were featured prominently in minicamp; McCourty at free safety, Dugger all over the field, Phillips in the box, and Bryant mainly in the slot. Anything can happen, but only a significant push from Bledsoe or Colbert would knock Bryant off the roster, who is the only non-lock here.

Slater, Bethel, and due to his new contract, Davis, are essentially locks. King is a Belichick favorite who has a decent chance to make the team, but he hasn’t played since 2018 and feels redundant with Davis. NFL players have difficulty ramping it back up after sitting out one season, let alone two. And King, instead of Bolden, is a candidate to re-sign with the team after they place a player on IR post-cutdown. They’d have a better chance of retaining King than Bolden in that scenario.

Although rookie kicker Quinn Nordin has a huge leg, Folk was excellent last year and in minicamp. Based on the fact that he went undrafted, the Pats should be able to stash Nordin on the practice squad. Unless they really think they have something with Nordin and want to see him kick in a game, I wouldn’t be surprised if they hide him in the preseason a bit, so he doesn’t get poached by another team on waivers.