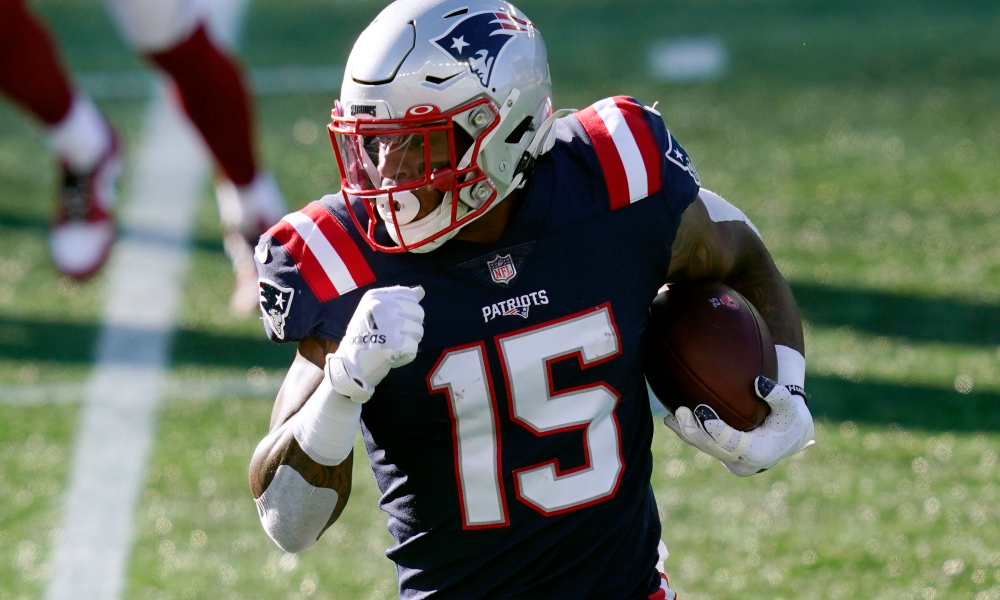 The Patriots are now 12 training camp practices and one preseason game into their preparation for the 2021 season.

After viewing every on-field event for the Patriots this summer, a competitive group is competing for fewer roster spots than rosterable talents.

Plus, there are always a few dark-horses that the coaching staff holds in higher regard than we do, and trade considerations are also a factor.

The Patriots will need to whittle the roster down to 85 players by Tuesday’s (August 17) deadline, and then there’s one more checkpoint before the final cutdown day on August 31.

Here is our best stab at a 53-man roster for the Patriots:

If COVID wasn’t a factor, the Patriots could save a roster spot by releasing Hoyer. Jones is ready, at the very least, to back up Newton. Belichick kept a rookie as the backup three times when Brady was here (Hoyer in ‘09, Garoppolo in ‘14, and Stidham in ‘19). Still, you never know what can happen with the pandemic. Plus, Hoyer gives the Pats value as a de facto QB coach and scout team quarterback. Jones will be the starter sooner rather than later, and seeing how comfortable the Pats’ first-round pick was against Washington is inching us closer to that reality.

Taylor is the final cut on the 53-man roster. The 54th man, if you will, and there’s a good chance that an injury or trade opens a spot for him. Unfortunately, keeping six running backs puts you in a bind elsewhere on the roster. The team likes Taylor, but he hasn’t had the breakout training camp that one had hoped. He flashed with a big catch in 7-on-7 on Monday and had some good moments in the preseason opener, but isn’t wowing anyone. Releasing Taylor is a tough pill to swallow. He is an NFL talent and certainly brings some juice out of the backfield. But Bolden looks terrific after a year off, while Stevenson isn’t going anywhere as a fourth-round pick. With the depth at running back, the Patriots roll the dice hoping that Taylor makes it to their practice squad.

With Keene’s season over, Johnson’s spot feels safer as a traditional fullback who has done his job as a lead blocker this summer. Plus, Henry’s injury shows us a world where if the Pats are down one-half of their TE duo, they’ll need to run more 21-personnel. Asiasi’s upside easily edges out LaCosse, who is having a decent summer but is a TE3 on an NFL depth chart.

Finding a roster spot for both Harry and Wilkerson is the trickiest part of this exercise. The former first-round pick and the 2020 UDFA standout are making cases for the 53. Harry’s explosiveness off the line is better than in his first two seasons, and he’s their only other natural “X” receiver outside of Agholor. A trade isn’t the teams’ first choice, even if the players’ agent says Harry wants out, and if Harry is here, it’s difficult to carry six wide receivers. Wilkerson is doing everything he can by flashing separation ability as a route-runner and is a willing contributor on special teams. He’s working closely with Matthew Slater and the other special teams aces during practice. Still, it’s important to remember that Wilkerson hasn’t done anything in the NFL yet, all of this is training camp hype, and he still has room to grow as a receiver at the catch point. Wilkerson, like Taylor, could find himself on the team if there’s an injury or trade in the future. For now, the Pats hope he clears waivers so they can stash him on the practice squad.

Before you say seven is too low a number, the number is so low because the five of the six linemen in the “cut” group didn’t earn it. Ferentz is the lone exception in that group. He’s having his best camp yet, but Ferentz is a third-string center on the depth chart and lacks positional versatility. Cunningham, Cajuste, and Redmond aren’t cutting it, while Marcus Martin ran more laps than anyone else in the OL room. If we had to keep an eighth guy, rookie Will Sherman gets the nod due to his tackle-guard versatility and upside. However, Sherman is 1-8-1 in one-on-ones with his only win over bubble player Rashod Berry while only playing five snaps on Thursday night. If the Pats aren’t happy with their depth, they could look elsewhere for a better option.

The expectation going into the preseason was that the first five names were roster locks. However, veteran Henry Anderson found himself playing into the second half against Washington, which usually isn’t good. Andersons’s future with the team is worth monitoring, while second-year Patriot Carl Davis is playing his way on to the 53. Davis has a great combination of size (320 pounds), length (6-5), and first-step explosiveness. He plays with heavy hands and effectively fits the system as a two-gapping interior DL. In a press conference this past week, Belichick called Davis a system fit who is having a good camp. With Davis on, he rounds out a very stout group upfront. It was surprising to see veteran Akeem Spence running with the starting defense on Thursday night, but Davis was again the more disruptive player.

If Winovich starts the season on the PUP list, that’ll open up a spot for Taylor or Wilkerson, but the expectation is Wino will be ready to go by Week 1. Rashod Berry started hot in training camp by flashing an effective speed-to-power move. However, he has cooled off since, is working with the scout team defense, and it seems likely that the Pats can sneak Berry onto the practice squad. The Patriots, as they did last year a few times, could elevate Berry from the practice squad and make him a game-day active if necessary. Berry hasn’t done anything wrong, per se, but the linebacker/EDGE depth is tremendous, and the vets are eating up all the snaps. Bower’s first flashes came in the game against Washington, where he beat a backup tight end for a sack. He’ll need to show us more before he’s in the 53-man roster conversation.

With the injury to McMillan, the Pats carry three off-ball linebackers, but it’s technically five with Van Noy and Uche’s versatility. Hall is also a candidate to return at some point once he’s healthy. Bentley looks much better playing behind Hightower and Van Noy in the middle of the defense. The fourth-year linebacker is also improving his processing skills in coverage, leading to two interceptions in practice. It would be surprising to see Bentley cut. As for second-year linebacker Anfernee Jennings, he didn’t dress for the preseason opener, which was a head-scratcher. Something could be going on behind the scenes. Jennings is repping at middle linebacker with the scout team defense. We haven’t seen him line up on the edge much, which is why he is listed as an off-ball linebacker here. If Jennings’s absence from Thursday night’s game wasn’t due to a personal matter, he could be the next player from the 2020 draft class to end up on IR with Dalton Keene.

We are lumping all the defensive backs together because there is so much crossing over between positions. The Patriots live by the “we are all DBs” mentality, so we will too. The clock is ticking on 2019 second-round pick Joejuan Williams. Williams played a team-high 63 snaps against Washington, which Belichick claimed was due to a lack of depth at outside corner. The team feels the same way about their outside CB depth as we do; they are thin behind Stephon Gilmore and J.C. Jackson, while none of their in-house options are separating themselves. For now, they don’t have the bodies to move on from Williams. But if an external candidate becomes available, don’t be surprised if Williams is moved.

The three players on the roster here are essentially locks due to their on-field production, contracts, and in Slater’s case, leadership. There’s a lot of love for Brandon King in the locker room, but the special teams ace hasn’t played in a regular-season game in two years and has the least amount of guaranteed money on his deal. There are also plenty of coverage aces elsewhere on the roster in Brandon Bolden, Jon Jones, and Adrian Phillips, among others.

Veteran Nick Folk and rookie Quinn Nordin are in a legit kicker competition. The Pats are in a tough spot with Nordin because there’s an unknown about consistency with him, and he’s likely generating too much buzz to make it back to the practice squad. Belichick directly mentioned the word consistency when he was asked about Nordin after Thursday night’s game (Nordin missed an extra point), and the rookie was known in college for getting on a heater and then losing it completely. Unless Folk is too hurt to kick come September, his reliability still outweighs the upside with Nordin.