Lazar’s Patriots Roster Projection: How Will Things Shake Out At the Skill Positions? 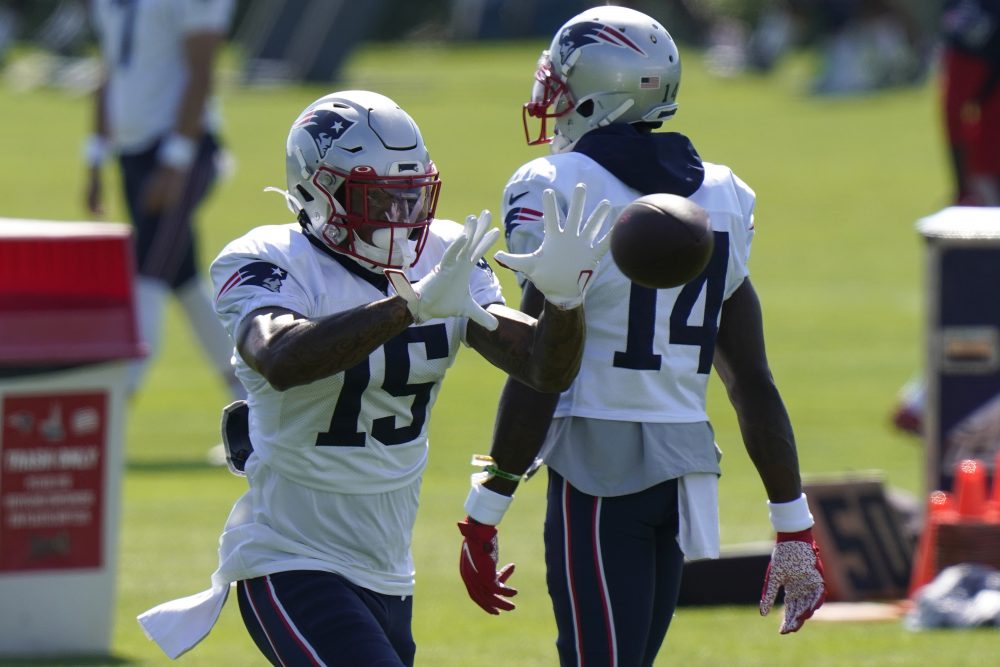 After observing two weeks of training camp, here’s my best stab at an initial 53-man roster for the Patriots.

New England will need to cut its roster down from 80 players by the 4 p.m. eastern deadline on Saturday, September 5. The Patriots will also have 16 practice squad spots this year due to the pandemic.

The Patriots keep all three quarterbacks with a chance to make the roster in an extremely unpredictable season. On top of the looming COVID-19 threat that could sideline a player for weeks, veteran backup Brian Hoyer’s experience in the system and ability to teach the offense will be an invaluable tool for Newton (or Stidham). Newton has talked at length about the support he has received from Hoyer, Stidham, the rest of his teammates, and the coaching staff as he learns a complicated playbook in a short time. Hoyer’s presence on the roster as another set of eyes seems like a lock this year.

Undrafted rookie J.J. Taylor was on my initial projection until Miller came off the PUP list earlier this week. Although he hasn’t practiced much, Miller’s value is no mystery due to his experience in the league. Taylor had a strong camp showing off his lateral mobility (jump cuts), elusiveness in the open field, receiving ability, and return skills. But he needs to learn how to run with more power behind his pads even at his size, and barring several injuries, an undrafted rookie is unlikely to have a significant role at running back for Belichick. Running backs coach Ivan Fears was spot on when he referred to Taylor as “little Dion [Lewis]” last week. Hopefully, Taylor will clear waivers and find his way back to the practice squad. He got screwed by the returns of Michel and Miller. On another note, the Pats appear deep at running back but the team will take offensive playmakers wherever they can get them. New England was in the mix for free-agent running back Leonard Fournette, and will continue to look for upgrades at every position on offense.

The Patriots could keep both Johnson and Izzo on the roster, but Izzo’s limited athletic profile and the fact that he’s not effective blocking from the backfield make him expendable. If the Patriots keep Izzo, it means a more talented skill player at another position will not make the team. The 2018 seventh-round pick showed improvement in his in-line blocking with better play strength at the point of attack, and it won’t be a major surprise if he makes the team as the third tight end. However, he’s still a relative nothing as a receiver. The Patriots need Asiasi and Keene to grow up fast as legit weapons in their offense. Asiasi did show intriguing qualities as a receiver, especially with his footwork and quickness in his route breaks, during camp. That’ll need to continue into the regular season. Keene’s effectiveness as a ball carrier at the NFL level remains to be seen. His versatility is his best attributes at the moment. One of the rookie tight ends needs to make an impact as a receiver. My money is on Asiasi.

Belichick made things easier on us by informing Sanu of his release on Wednesday night. The veteran wideout was the wild card at the position, it could’ve gone either way, but the Pats opted to free up $5.75 million by walking away from a bad trade. Ideally, Belichick upgrade a group of pass-catchers that’s dangerously low on firepower via trade. Currently, Sanu’s release frees up a roster spot for either Thomas or Meyers as Byrd, Olszewski, and Ross were already on the team. Following suit with waiving Sanu, Thomas gets the nod over Meyers due to his potentially game-breaking speed. Sanu struggled to separate throughout camp, and the team seems focused on getting faster receivers on the field, which fits Thomas more than Mayers. Although the 2019 UDFA had a successful rookie campaign, he’s far from a burner and predominately plays in the slot. The six on the roster have a lot more speed and versatility. Thomas’s inclusion also extends New England’s streak of an undrafted rookie making the initial roster to a 17th consecutive season.

The Patriots need their offensive line to dominate this season, and it did just that at times throughout training camp. Whether it’s an indication of the talent that exists or a weak front-seven defensively, the Pats are in good shape to make that happen. Eluemunor and Froholdt took significant steps forward in their second seasons with New England. The first five names are expected starters, with Eluemunor the top candidate to replace Marcus Cannon at right tackle. The final spot came down to Onwenu and Cunningham, with the rookie guard edging out the veteran tackle because his play strength is a legit NFL starter trait. Cunningham looked much better as a run blocker early on in camp, but he’s still struggling with power rushers and dropping his anchor in pass protection. Herron’s ascension as a guard-tackle option also made Cunningham expendable.

Free-agent addition Beau Allen could end up on injured reserve, but he’ll likely make the initial cutdown so he can return this season. Guy, Butler, Wise, and Cowart had strong camps. In particular, Wise and Cowart have really improved. Wise is now New England’s best one-on-one interior pass rusher, and it was trending that way last season in his limited role. Cowart is playing more in the A-Gap as a one-technique penetrating nose tackle or as a three-technique in pass-rush situations. The 2019 fifth-rounder is a stout run defender with decent play strength and excellent explosiveness off the ball. Belichick called him one of the most explosive players on the team and pointed out his improvements as a pass rusher. Cowart is one of a handful of Patriots that could make a big year-two leap.

A terrific offseason and training camp earn 2017 third-round pick Derek Rivers a roster spot over Calhoun. Belichick spoke about Rivers’ improved play strength and explosiveness after the Pats draft pick worked diligently with the training staff this offseason. Rivers developed a formidable long arm rush move where he can use his speed-to-power to walk tackles back into the quarterback. From there, he incorporates a straight speed rush or punch-and-dip move as counters. New England is looking for edge rushers that can bolster its pass rush after losing Kyle Van Noy, Jamie Collins, and Dont’a Hightower this offseason, and Rivers offers more upside in that role than Calhoun.

The Patriots only keep three pure off-ball linebackers but Copeland, Uche, and Jennings are hybrids that can flex on or off the line. Plus, the Pats will play multiple defensive backs at linebacker spots throughout the season. Brooks, Dugger, Phillips, Jones, and Williams could all take snaps in the box, adding to New England’s depth. The first two names here are locks, while Maluia makes the team after a successful rookie camp. Maluia is an excellent athlete as a converted safety and brings safety-like skills to coverage. He can also play in the kicking game where he’s an effective tackler in space. Internally, the Pats are feeling Maluia. Although he’s making expected mental errors as a rookie, and linebackers coach Jerod Mayo said he doesn’t fully understand where he’s going yet, he makes up for it with instincts and athleticism. The Pats are mighty young and mighty thin at linebacker, but that’s where their defensive versatility can be a huge advantage.

The first two names on this list might be the two best players on the roster. Jackson, who participated in camp more than Gilmore, was the best player on the field. Michael Jackson is a tough cut. I love his competitiveness and physicality, both of which fit the Pats system, but the position is too loaded for him to stick around. Bryant looked lost, and like he couldn’t hang with NFL receivers, it’s surprising they didn’t try him out in the slot more, while Ross didn’t stand out outside of one practice. As for 2019 second-round pick Joejuan Williams, he’s transitioning to safety where he can play as a tight end stopper. William’s size and man coverage skills make him a good matchup for tight ends or bigger receivers. We’ll see if he can help in run support effectively enough to stay in the middle of the field.

The Patriots keep all five safeties currently on their roster for two reasons: one, Belichick loves his safeties, and two, there’s a role for all of them. The leader, McCourty, will play in his usual free safety spot and move around the defense. As for the Dugger, Brooks, Phillips trio, those guys can insert into the box and play at the linebacker level where they can guard backs and tight ends. Dugger, the Pats’ top pick in April’s draft, is learning quickly, and we’ve seen his game translate nicely to the NFL level. He can play either deep safety, where he played in college, or in the box, and said his veteran teammates and coaches are helping him learn the Chung role. Dugger’s instincts and athleticism keep him around the ball, giving him intriguing playmaker qualities. Davis is another depth free safety option that is also taking on an Nate Ebner-like role on special teams. With Ebner, Brandon Bolden, and Brandon King (reserve PUP) no longer in the mix, the Pats keep Davis to add him to their group of kick coverage specialists.

Folk gets the nod over rookie kicker Justin Rohrwasser because he’s just plain better. Folk went 17-for-20 on field goals since joining the Patriots while Rohrwasser was 11-for-20 over that span. Plus, Folk has plenty of NFL experience, including a successful stint with the Pats in 2019. Rohrwasser has a big leg, and we see that on display at practice when he kicks from over 50 yards, but he’s wildly inconsistent and had some brutal misses. Rohrwasser will likely end up on the practice squad.

Some might immediately say there’s no way Bill Belichick will release Bethel. However, if you keep the veteran special teamer, you need to leave off a younger player with higher upside. For example, there isn’t a spot for one of the rookie offensive linemen or a sixth wide receiver (Jeff Thomas). The team might not need to make this move if something is going on behind the scenes that we do not know, like an injured player or trade. Regardless, trying to integrate younger players should be a priority this season, not hanging onto every last special teamer as they would in the Brady era.