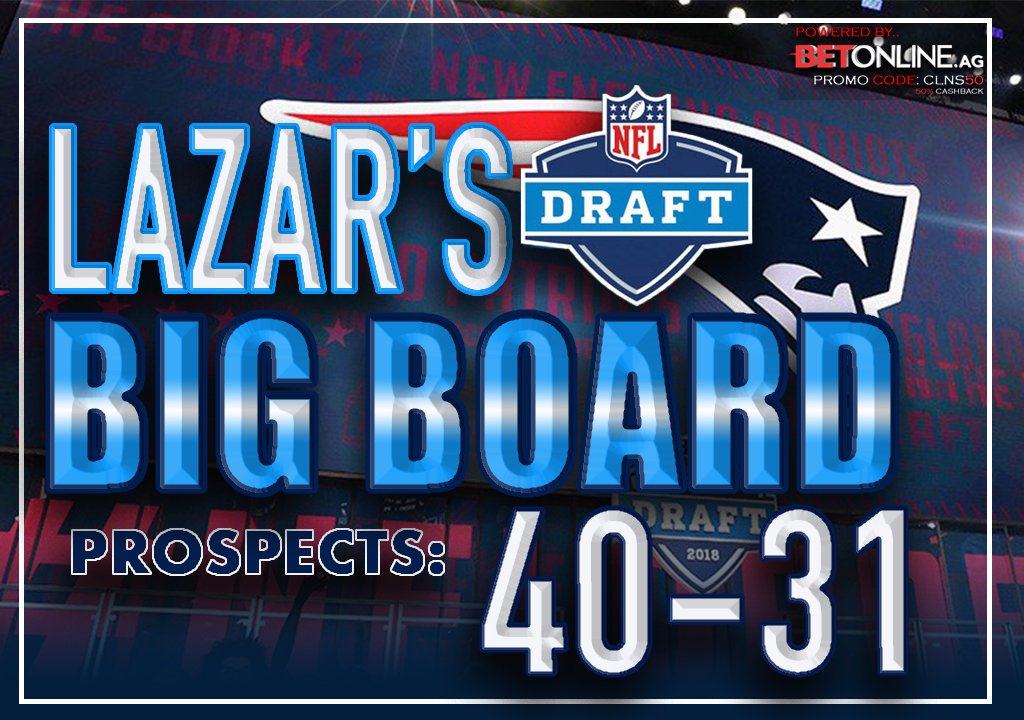 As we continue the countdown to number one, here’s 40-31:

The first Alabama prospect on the board, Harris is also the only running back in my top 50 for New England. Harris shared touches in a loaded backfield during his time at Alabama and told me that he didn’t care about carries as long as the team won a very Patriots-like answer. He’s a Patriots type player, and he also knows who he is as a runner. As a bigger back, Harris doesn’t dance focusing on getting downhill in a hurry to build up his speed and convert that speed to power. Harris has excellent vision between the tackles and a knack for finding open space to pile up explosive runs. Although there’s a lot to like about Harris, his running style is very similar to Sony Michel, and he’ll likely come off the board before the Patriots entertain a running back after drafting Michel in the first round a year ago.

Hardman is an electric receiver prospect that ran a 4.33-second 40-yard dash at the combine. That speed translates into a deep threat from the slot as well as a game-breaking talent with the ball in his hands. Hardman has tremendous versatility starting his career at defensive back before moving to receiver and is a weapon as a kick returner too. A YAC monster that’s quicker out of his breaks than most deep threats, Hardman is a big-play machine that could refine his possession receiver traits with a more significant role in the offense.

Hooker is a versatile safety prospect that played the Patrick Chung role in the Iowa defense. A leader of the defense, Hooker was a coach on the field making the secondary calls last season. He tested extremely well at the combine, including a 6.81 three-cone time, and could be a four-down player at the next level. Defensively, Hooker has the frame to hold up in the slot or box against the run while also possessing the mirror and match skills to play man coverage. However, his most impressive trait is his instincts and ball skills as an underneath zone player. Hooker’s combine workout didn’t translate all the time onto the field, and his skill set might also be redundant to 2018 second-round pick Duke Dawson, but he’d bring some necessary youth and potential to the safety position.

Miller is an underrated edge prospect that has a similar skill set to 2017 third-round pick Derek Rivers, but unlike Rivers, Miller played against top-tier talent in college. An athletic edge rusher, Miller has long arms that he uses as weapons with a variety of pass rush moves to go along with his speed and flexibility to turn the corner. Miller is well-versed with his hands coming at tackles with a series of swipes and stabs that create separation for him to use his speed to hunt quarterbacks. He’ll also use heavy hands and length to press blockers in the running game and can drop into coverage, which is something the Patriots like to do with their edge defenders. Miller is undersized at 247 pounds and can get pushed around in the running game. In the Patriots’ system, he’s likely a situational pass rusher with the potential to play on every down if he can hold up against the run.

The Ole Miss left tackle is a polarizing prospect; he’s a high-end pass protector when he wants to be, but his effort is very inconsistent. Little is the type of player that would hear it daily from Dante Scarnecchia, but he checks every box for a starting left tackle in the pros. He comes out of his stance with ease, has quick slides in his pass sets to mirror edge rushers and locks out his long arms with sudden punches to stymie defenders. The Ole Miss offense didn’t run the ball often, and Little isn’t a people mover, but he can use his athleticism to reach blocks on the move. Little needs to leverage his blocks better by bending his knees and he struggles with power rushers at times, but if you can get consistent effort out of him, he’s got starting caliber traits.

Williams was one of my favorite studies at the cornerback position at nearly 6-4 and 211 pounds. The Vanderbilt product has above-average movement skills for a bigger corner with the necessary short-area quickness to mirror receivers in man coverage (6.92-second three-cone at Pro Day). Plus, his length allows him to disrupt passes at the catch point either by reaching around receivers or contesting jump balls down the field and he’ll smoother receivers with his size at the line of scrimmage. Williams held his own against some of the best receivers in college football last season in A.J. Brown and Miles Boykin and is a reliable tackler. The Patriots might view Williams as more of a matchup player against bigger receivers and tight ends than a regular on the perimeter due to a lack of long speed, but he’d shine in that role.

The speedster from Ohio State is one of the best athletes in this year’s wide receiver class and is one of the most dangerous as well. Campbell is a fascinating study; his average depth of target was a shade over four yards, and he has very few downfield targets on film despite 4.31-speed. Instead, Campbell wins on a horizontal plane with gadget plays, shallow crosses and routes over the middle against zone coverage. Nobody in college football could keep up with Campbell, though, who accumulated 90 catches for 1,063 yards and 12 touchdowns last season for the Buckeyes. There aren’t very many players as good as Campbell with the ball in his hands, and guys like that usually go high in the draft.

Howard is a small-school tackle prospect that’s skyrocketing up draft boards due to his unique versatility and athleticism. Believe it or not, Howard was a High School quarterback, and that experience turned him into a very smooth athlete. His pass sets are fluid without any of the herky-jerky stuff you sometimes see, and he’s got excellent knee bend to leverage blocks by getting underneath edge rushers. He’s not a people mover, but he’ll execute kick out blocks and is explosive up the second level or on the move. Alabama State featured a two-quarterback system, one lefty and one righty, and Howard would flip sides during games depending on which quarterback was under center, offering up rare swing tackle experience. Some project Howard as a top 50 player, and I see him coming off the board in the second round as well.

Evans started at left tackle on the best offensive line in the country and got some love from Bill Belichick during a film session documented by Boston Globe scribe Jim McBride. As Belichick said, Evans is a brick wall with excellent core strength to anchor against bull rushers. He’s the definition of a people mover, with immense grip strength and power to finish blocks with nastiness as a run blocker. He also has a good feel for his landmarks, and with a pocket passer like Brady, can set back forcing defenders to run through him, which isn’t easy. Evans has some of the same concerns that Isaiah Wynn had coming out as an undersized tackle prospect, but he started games at both tackle spots and will start somewhere along the offensive line in the NFL even if that means a move inside to guard.

Thornhill tested in the 99th percentile at the combine with excellent results in the 40-yard dash (4.42s), jumps (44-inch vertical) and bench press (21 reps). Thornhill is a versatile backend player that excels as a deep safety playing center field with excellent route recognition and ball-hawking skills. He’s also a converted corner with the man coverage skills to match up against tight ends and slot receivers. The Virginia product is still learning how to affect the running game as a deep safety and doesn’t have the size to play in the box, but he projects as a do-it-all chess piece in a similar role to Devin McCourty.