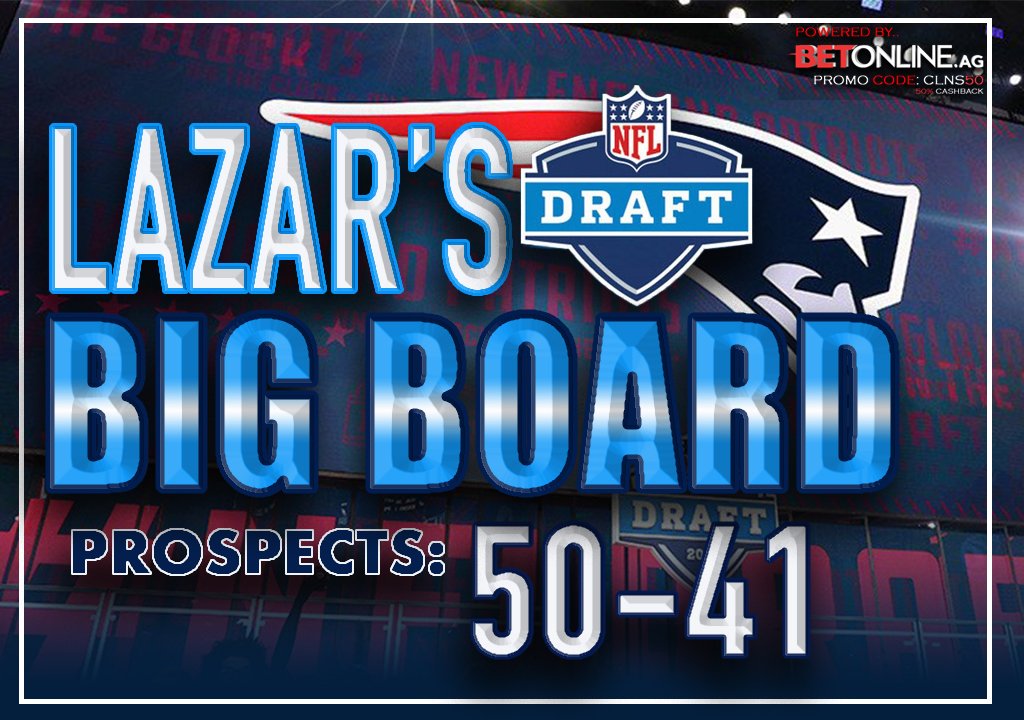 For the second consecutive year, we will try our best to project the top 50 players that the Patriots could target in the 2019 NFL Draft.

As we begin the countdown to number one, let’s start with 50-41:

An easy projection for the Patriots, the shifty Clemson receiver is an intelligent route runner that is very nuanced in his stems and route breaks. He understands how to win with leverage and creates separation at the top of his routes with quick feet, fakes, and hips that can sink and snap routes off in either direction. Renfrow isn’t necessarily explosive after the catch, but he has excellent awareness of oncoming defenders and elusiveness as a ball carrier. The Patriots struck out on slot receiver Adam Humphries in free agency, and Renfrow’s game resembles Humphries more than Julian Edelman or Danny Amendola in my estimation.

We’ll get to his quarterback in a minute, but let’s start with Will Grier’s favorite target, David Sills. Sills isn’t the best of athletes, but he’s a converted quarterback that still reads defenses like he’s under center, which makes his projection into the Patriots’ option route-heavy offense a bit easier. Sills has the versatility to play on the outside or in the slot with an excellent release package against press coverage. Sills doesn’t have great speed, but he has long strides at a shade over six-foot-three, and his height also lets him play above the rim in the red zone. Sills had 35 career touchdowns at West Virginia, and projects as a dynamite red zone threat in the NFL.

Everyone is in search of the next George Kittle (fifth-rounder in 2017), and that has led to some pre-draft buzz for Knox. At his size (6-4, 254 pounds), Knox can really run, and many believe he was underutilized as a pass catcher in the loaded Ole Miss offense. Knox only had 39 career catches for 605 yards for the Rebels and did not record a touchdown in college. However, he’s a workout warrior that will stretch the field and flashed some change of direction skills. He also has strong hands and above-average ball skills. He’ll need to learn some of the finer points of the position as a blocker, and we are projecting his success in the passing game, but the potential is there if Knox can match his physical tools with on-field production.

Another project at tight end, Warring is as inexperienced as they come in the draft. A former water polo and basketball star, Warring didn’t pick up a football until his senior year of High School and wasn’t considering an NFL career until his final season for the Aztecs. However, Warring has rare movement skills for his size with long speed, explosiveness and a unique ability to sink his hips and make cuts at the top of his routes. Due to his basketball background, Warring also knows how to box out defenders and uses his size to win jump balls down the field. Like Knox, Warring is a developmental player that takes some projecting to see NFL success, but he’s a very smooth athlete.

Scharping is another high football-IQ prospect that excelled in the classroom as well at Northern Illinois. Scharping is the type of player you want to invest in as a student of the game. He has the size, strength and foot speed to play either tackle spot and is an effective run blocker with mirroring skills in pass protection. He only gave up one sack in the last three seasons playing both left and right tackle. Scharping understands how to play to his strengths, and also understands his role within run blocking schemes and pass protection calls. Speaking to him at the combine, he told me that he studied his opponents on film before games to pick up their tendencies. Scharping makes a lot of sense for the Patriots at the end of the third round to bolster their tackle depth.

The Patriots hosted Hurd on a top-30 visit, and he’s one of my favorite mid-round prospects. Hurd started his career at Tennessee as a running back with Alvin Kamara. Due to concussions, he asked to switch to wide receiver, but the Tennessee coaching staff wasn’t having it, so he transferred to Baylor. At Baylor, Hurd was a natural at receiver posting 69 catches for 946 yards and four touchdowns despite learning the position on the fly. He also brings tremendous versatility as he still carried the ball 48 times averaging over four yards per rush in 2018. At nearly 6-5 and 226 pounds, Hurd explodes off the line of scrimmage and into his route breaks, and due to his experience at running back, is an absolute weapon after the catch. As you’d expect, Hurd has technique issues as he learns a new position, but he has all the tools and a solid year of production under his belt. Hurd can also take on a Cordarrelle Patterson type role as an emergency running back and gadget player while he develops as a receiver.

There’s a lot to like about Finley, and the NFL is high on him due to his accuracy and intelligence. Finley sees the field well and has a baseline knowledge of coverage and safety rotations. His downfield accuracy is above-average, and he can control the football by throwing it around defenders into spots where his receivers could make plays. He doesn’t always trust his arm talent, which is only average, and there are some bad decisions and turnovers on his tape, but he has the physical and mental makeup that’ll attract NFL teams.

Jones will undoubtedly go higher than this as a potential top 20 pick, but he never played like a first-round talent. Jones garners some Patriots buzz because of his skill set; he’s at his best in the short passing game where he can make quick decisions and his mechanics are generally clean. However, his accuracy beyond ten yards is spotty, and he was in an offense that created first-read windows through RPO and play-action schemes. The great Mark Schofield compared Jones to former Eagles quarterback Nick Foles, and that comparison makes a lot of sense. Foles, like Jones at Duke, succeeded in similar offenses under Doug Pederson and Chip Kelly.

The NFL seems to have a different opinion on Rypien than those in the media. Mechanically, Rypien is arguably the cleanest prospect in this class with excellent footwork and a quick release. He’s also accurate to all three levels and is terrific at manipulating defenders with eye and shoulder fakes to move them out of passing lanes. The Boise State product isn’t afraid to stand in the pocket against pressure and has experience under center and was successful with play-action schemes where he turns his back to the defense, something that most college quarterbacks don’t do these days. There are concerns about his size, in particular, smaller hands, which led to some ball security issues and left him susceptible to injury with his fearless playing style in the pocket.

The last quarterback on the big board, Grier is one of the most talked about prospects for the Patriots in this draft. A fearless leader with moxie, the West Virginia signal-caller has the confidence and makeup that you look for in a starting quarterback. That might sound cliche, but it’s true, and on the field, he does some things exceptionally well. First, his downfield accuracy, especially on deep balls, is tremendous, which bodes well for his NFL success. The West Virginia coaching staff also put a lot on Grier’s shoulders in terms of play calling at the line of scrimmage, and he’s not afraid to fit the ball into tight windows over the middle. Grier might need to rein in that gunslinger mentality a bit in the pros, and his feet are all over the place, but he’s an accurate passer that walks and talks like an NFL starter.