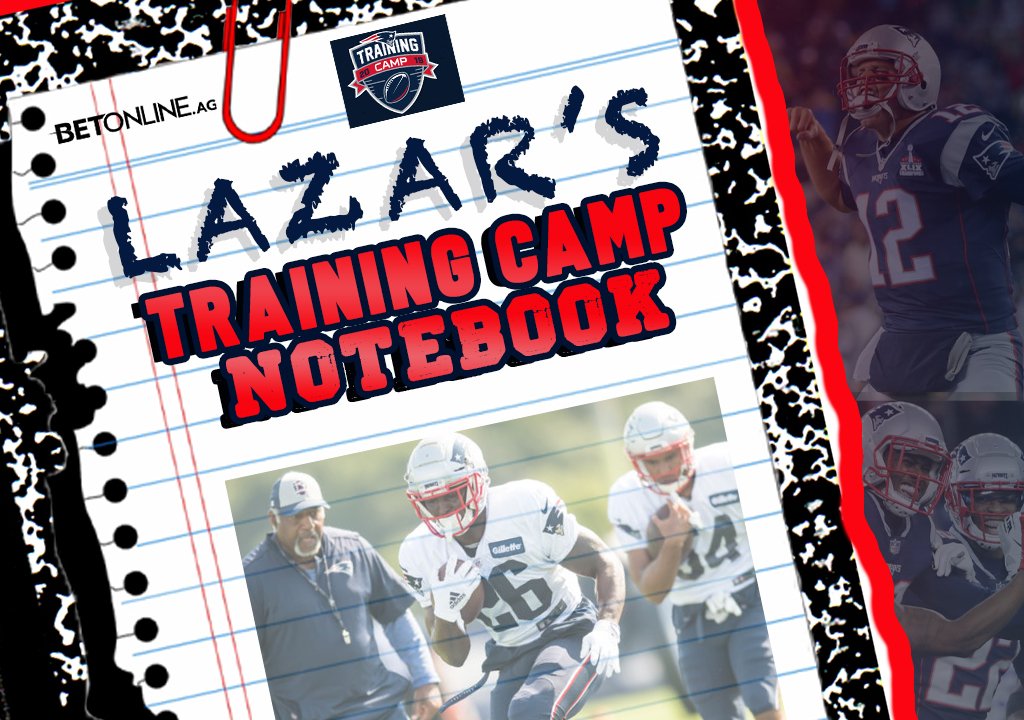 FOXBOROUGH — The Patriots kicked off the first day of padded practices with a brisk one hour and 30-minute session that featured the return of Tom Brady in uniform and a host of Pats alumni.

After we got a glimpse of coach Brady yesterday, the Pats QB returned to the field with his teammates on Saturday in an up and down practice for the six-time Super Bowl champ.

Brady nearly completed a 40-yard bomb to Phillip Dorsett early on in the session, but JC Jackson and Devin McCourty nicely defended the pass. Overall, Brady was 0-4 during 11-on-11s with some ugly throws. As you’d expect, the chemistry with his new receivers is still a work in progress.

Among those missing from practice were defensive end Michael Bennett and rookie Byron Cowart while David Andrews and Sony Michel returned in a limited capacity.

During his media availability this morning, Director of Player Personnel Nick Caserio confirmed that Bennett’s absence is due to personal reasons.

In the first portion of team drills, there was a clear group of starters that lined up against Tom Brady and the offense. The Patriots were in a 3-4 base with the following personnel:

However, it’s worth noting that Patrick Chung is still in a non-contact jersey and will be out there with the starters once he’s fully healthy.

Although the four listed above went out with the first team, the Patriots continue to cycle through linebackers in team drills like hockey lines. For those charting the practice like myself, it makes it very difficult to keep up with who is on the field at linebacker on every snap. Along with those four, second-year linebacker Ja’Whaun Bentley is seeing plenty of reps as well. The Patriots are very deep at linebacker all the sudden.

Once again, Isaiah Wynn remains a light participate in practice. The “penciled in” starter at left tackle is mostly a spectator in these sessions so far doing light drill work at the beginning of practice before departing to the conditioning field or taking mental reps on the side. As of right now, the starting offensive line is as follows (from left to right): Joe Thuney, James Ferentz, Ted Karras, Shaq Mason and Marcus Cannon. Ferentz and Karras rotate between left guard and center. We got a heavy dosage of run game work today on the first day of padded practices.

4. Checking in With N’Keal Harry

The Pats rookie remains heavily involved in every practice session as you’d expect for a first-round pick. He hauled in the catch of the day on a back-shoulder throw from Brian Hoyer where he boxed out JC Jackson for a touchdown. Harry is mostly taking reps on the outside but did move into the slot a few times today. Although we haven’t seen him unlocked as a ball carrier, it’s clear that Harry’s size and contested-catch abilities make him a matchup problem in the red zone.

We are in year three for 2017 third-round pick Derek Rivers, and it’s a make or break camp for him. Rivers won both of his one-on-ones on Saturday including beating starting tackle Marcus Cannon clean with a dip and rip move. Rivers struggled mightily in one-on-ones during training camp a year ago, so this is a notable improvement. The coaching staff told me numerous times last season that Rivers, who missed his entire rookie season due to injury, was buried on a deep depth chart. The Youngstown State product has talent but finds himself on the roster bubble this summer. We’ll see if he can carve out a role.

WR – Maurice Harris – Harris continues to build on a strong minicamp as one of the more consistent practice players through three days of training camp. He has a good feel for getting open and natural hands. Plus, they’ve featured him on end arounds and jet sweeps as well.

CB – JC Jackson – Jackson continues to build on a strong rookie campaign with one of the plays of the day. The Patriots were in cover-3 when the offense sent Phillip Dorsett on a deep post across the field. Jackson was responsible for the deep third that Dorsett ran into, and quickly adjusted his drop to race under Dorsett’s route and break up the pass.

OL – James Ferentz – Ferentz won both of his one-on-ones and is squarely in the competition for the open interior line spot if Joe Thuney plays left tackle.

OL – Isaiah Wynn – Wynn isn’t on the “down” list for something he did on the field, but that’s just it, he hasn’t done anything on the field.

WR – Dontrelle Inman – the free-agent addition has been an afterthought through three training camp practices and June’s minicamp. He hasn’t been involved at all during team drills.