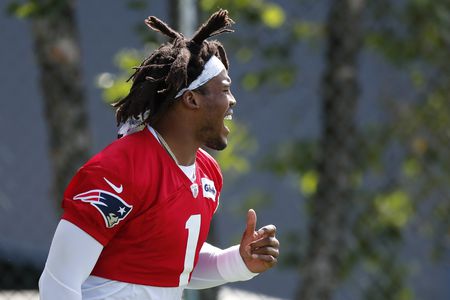 The Patriots practiced in full pads for the second consecutive day in a two-hour session on the practice fields behind Gillette Stadium.

The intensity continues to rise, and the scheming on both sides of the ball is starting to resemble a regular-season practice with quarterback Cam Newton taking the majority of the snaps.

Newton went 14-of-23 with three drops by his receivers in arguably his most accurate practice, as we see him continue to get more and more comfortable in the offense each day.

During team drills, the former MVP hit wide receiver Gunner Olszewski on a bending corner route over Jonathan Jones and then dropped a dime along the right sideline on a 30-plus yard completion to running back J.J. Taylor with Ja’Whaun Bentley in coverage.

As we continue to write each day, New England’s offense will be much different than it was while Tom Brady was under center, as the Newton adaptations are in full effect. Unfortunately, we cannot get into specifics about the exact schemes the Patriots are using with Newton at quarterback, but use your imagination, they’re very Panthers-like.

The Patriots also got cornerback Stephon Gilmore back at practice on Tuesday after Gilmore missed four-straight workouts due to a personal matter. The list of absences from today’s session includes Julian Edelman, Devin Ross, Adrian Phillips, Will Hastings, Jeff Thomas, and Beau Allen. Edelman’s absence was likely a veteran’s day off for the 34-year-old.

– As we said above, Newton’s timing in the offense is starting to come along. Today was his best practice of camp, something I feel like we write each day as he continues to improve. As he grows more comfortable in the playbook, Newton is starting to push the ball downfield more, which he did on throws to Olszewski, Taylor, and a back-shoulder snag by N’Keal Harry with Jason McCourty in coverage. He’s also slowly falling in love with passes to New England’s deep group of pass-catching running backs. There’s a lot of excitement right now for Newton, who shows his own enjoyment for his play after every big reception.

– Jarrett Stidham was eight-of-nine during team drills, his most active practice since word of his hip injury broke last Thursday. Stidham made on-time throws to Damiere Byrd on a comebacker along the sideline and finished practice with a confident throw to Byrd on a slant with Stephon Gilmore in coverage. Stidham doesn’t show any obvious signs of injury with his passes, but it’s clear that he lost the starting job to Newton already.

– Brian Hoyer continues to be a steady presence at practice going eight-of-13 during team drills. Hoyer gets more snaps than Stidham at this stage, but his reps are more about spelling Newton than him still competing for the starting job. The hope here is that Hoyer sticks around to coach Newton this season.

– N’Keal Harry didn’t have quite the same impact in Tuesday’s session as he did yesterday, but he continues to lay the foundation for what should be a great connection with Newton. During 7-on-7 drills, Harry gave Newton some space and made a contested back-shoulder grab against Jason McCourty. He also hauled in a contested ball with Joejuan Williams in coverage during one-on-one’s and got into it several times after finishing his blocks on Pats corner Michael Jackson. Harry dropped Jackson to the ground during a blocking drill, and the two were separated after jostling after the whistle earlier in the day. There’s no love lost between those two, but it’s great to see Harry’s competitive fire in the last few days.

– Gunner Olszewski continues to play well every single practice. On Tuesday, he made an acrobatic grab to climb over Jon Jones during 7-on-7s and made another difficult catch against Jones where he battled through contact on an under route during one-on-ones. At this point, there’s no question in my mind that Gunner will make the team. The question is, how much will he play, and how high is his ceiling? Sometimes he looks like a young Edelman or Amendola out there, and that’s not an exaggeration.

– Damiere Byrd hasn’t taken anyone deep yet, but his ability to use his speed along the sideline to set up comebackers will be useful to the Pats offense. He can really run, and cornerbacks have a tough time stopping on a dime once he pushes vertically in his stem. I would also expect Byrd to factor in as a returner.

– Strong day for UDFA WR Isaiah Zuber, who has some wheels and is improving as a route runner. Zuber won all three of his one-on-ones, beating Michael Jackson twice, and hauled in two more receptions during team drills. His speed is better than expected.

– Rookie tight end Devin Asiasi left practice with an apparent ankle injury. It looked like Asiasi could’ve gone back in, but there’s no reason to push it with the promising first-year tight end. Asiasi’s sharp cuts out of his route breaks and blocking ability are standing out each day.

– Fellow rookie Dalton Keene had some nice grabs during drills on Monday. His speed up the seam is notable, and he’s starting to get into the scheming with Newton. Newton hit Keene for the second consecutive day on a leak route out on the weak side of the play where Keene was all alone in the flat. These aren’t live tackling sessions, so we don’t see Keene’s YAC abilities, but they’re setting him up for those opportunities. Although he’s versatile, his blocking is more of a work in progress than his route running at the moment.

– Recently signed tight end, Paul Butler, flashed a little during team drills on Tuesday. He’s got great size (6-6, 250 pounds) and reliable hands. He caught a few short passes where he was in the right place in an appropriate amount of time. We’ll see if he can stack some good days together.

– Pats undrafted rookie J.J. Taylor continues to make plays both as a ball carrier and receiver. In Tuesday’s session, Newton worked a favorable matchup for Taylor against Ja’Whaun Bentley in coverage by completing a 30-plus yard deep throw to his running back. Taylor has the versatile to run routes from multiple alignments and delivers some nasty jump cuts. RBs coach Ivan Fears called him “little Dion (Lewis)” and Fears is spot-on with that comparison. The next step for Taylor is to become a more powerful runner between the tackles.

– The Pats continue to get good things out of Jermaine Eluemunor, whose power at the point of attack to open up rushing lanes is much better than expected. Eluemunor is working well with others on double-team blocks. Although, he got beat a few times in 11-on-11s with speed around the edge. He’ll need to get used to teams testing his lateral mobility often and start anticipating some of those rushes.

– Although he got beat by Adam Butler in team drills, Korey Cunningham’s athleticism and body control in space continue to stand out. He led the way for Rex Burkhead on a toss play during goal-line work where the Pats secondary might’ve made some business decisions with the 6-6, 311-pound Cunningham running full speed at them.

– Both rookies Justin Herron and Michael Onwenu had some good moments during two-on-twos and a run-blocking period aimed to practice leveraging your gaps. Onwenu had to run a lap after getting called for a hold during the run-blocking drill, but he’s pretty good working his hands inside the defender’s chest to anchor and drive him backward.

– Adam Butler registered another sack beating Cunningham and was the first guy on the scene pushing Rex Burkhead towards the sideline on a toss play. Butler could be in for a huge season.

– Second-year Patriot Byron Cowart is emerging as a top interior defender against the run. He’s a very stout player with immense strength, making him difficult to move, and he’s got good first-step quickness to fire into the backfield when he’s free to shoot gaps. The 2019 fifth-round pick was the number one recruit in the nation coming out of High School and seems to be learning a lot from teammate Lawrence Guy. Guy is taking on a mentorship role with Cowart, it seems.

– We saw our first extended action of training camp for rookie third-round pick Anfernee Jennings. Jennings’s ability to drop into coverage really stood out, as he made two nice plays in the flat. First, the Pats tried to confuse Jennings with some misdirection on the goal line with the running back flaring into the flat, and Jennings was there to make the play. Then, he drove the flat from an underneath zone to limit Paul Butler after the catch. He looks very comfortable in space.

– Chase Winovich continues to be a productive pass rusher for New England’s defense. He showed well in one-on-ones and is getting into the backfield during team drills. He’s primed for a year-two leap.

– Derek Rivers might have a chance to make the roster with the way he is playing. Rivers hasn’t taken over by any means, but he’s making it difficult on the Pats tackles in passing situations and is showing much better timing and pad level as a rusher. He can play, if healthy.

– Stephon Gilmore was back at practice and didn’t miss a beat. He let up two catches in team drills on short throws, but the Pats quarterbacks were playing with fire by throwing in his direction. Gilmore might’ve been a little rusty after the time off, but he’s moving the same as last year.

– JC Jackson’s intensity and physicality in practice are fun to watch.. Jackson is strapped to his man on every rep, even on plays he surrenders a catch. He lives in the receivers hip pocket, and battles at the catch point on every target. The Pats cornerback has been the best DB in camp.

– Michael Jackson is doing everything he can to make an impression, including battling with N’Keal Harry. His size, length, and physicality are a nice combination, and he’s using his skills properly. Again, standing out more than Joejuan Williams at this stage.

– Terrence Brooks is having an excellent camp and is blossoming into a leader in the Pats secondary. Brooks told CLNS Media that he modeled his game after Patrick Chung a year ago, but wants to be even more versatile in his second season with the team. He’s vying for a starting role along with rookie Kyle Dugger, who missed another practice on Tuesday.

– Veteran safety Adrian Phillips better get on the field because his job is by no means safe. From this perspective, Phillips, who might’ve gotten caught up in the false-positive COVID-19 tests, has missed back-to-back practices and is losing ground to Brooks and Dugger. Phillips might not have a spot on the 53-man roster.

– The consensus was that Nick Folk made all three of his kicks while rookie Justin Rohrwasser went 2-for-3. Regardless of those numbers, it’s evident that Folk is far more consistent than the rookie and is a much safer bet to win the kicking job. Rohrwasser is an adventure.