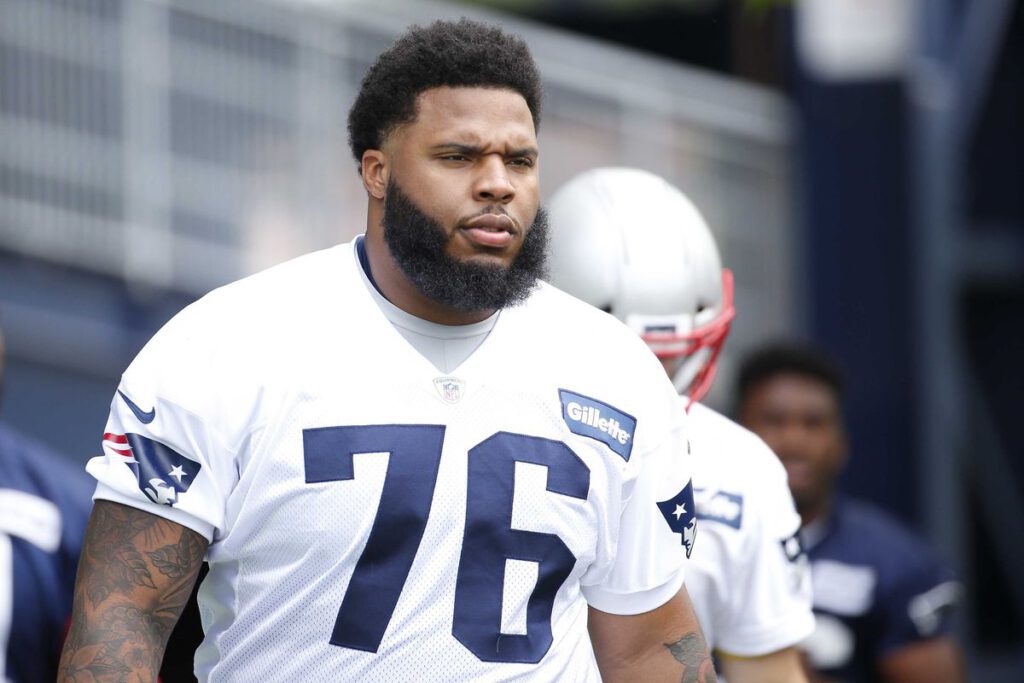 FOXBORO — the Patriots held their penultimate training camp practice of 2019 at Gillette Stadium on Monday morning with players in full pads for a two-hour session.

Head coach Bill Belichick said that the team had a few things to work on in-house before they turn the page to a week in Nashville with the Tennessee Titans.

On Monday, Belichick called out situations during team drills focused heavily on the passing game that didn’t go particularly well for the offensive side of the ball.

Chung’s interception came in a seven-on-seven red zone drill where he jumped a Ben Watson route to intercept Brady in what might’ve been a pick-six.

Although the young receivers show promise every day, the Patriots defense has out-played Tom Brady and the offense all of training camp.

On the attendance front, first-round pick N’Keal Harry missed Monday’s session after reinjuring his hamstring in Thursday night’s preseason opener. An injury that he first suffered last Tuesday in joint practices with the Detroit Lions.

Harry’s injury is not believed to be severe, but the wide receiver will miss some practice time.

Along with Harry, tight end Matt LaCosse was also absent after his leg got rolled up underneath him in Thursday night’s game.

Isaiah Wynn took part in competitive contact drills for the first time this summer. Wynn was a full participant in one-on-one and two-on-two drills and cycled in as the top left tackle during 11-on-11s. During positional drills, Wynn won his rep against rookie Byron Cowart in one-on-ones and combined with Ted Karras to beat Cowart and Chase Winovich in two-on-twos. He then held up well in 11-on-11s.

Three things stand out to me while observing Wynn in a contact situation for the first time in a while: his feet, his approach into run blocks and his core balance. Wynn has fantastic foot speed and timing as he sets without any hitches or extra steps. In run blocking, he has a great approach into his blocks syncing his feet up with his upper body as he goes into engagements, which allows him to create drive force and leverage to move guys off the ball. Wynn’s technique is excellent, especially for a younger player.

The veteran safety has taken a lot of snaps this summer with the second-team as the Patriots get extended looks at Terrence Brooks and Obi Melifonwu. Harmon also played 11 snaps in Thursday night’s preseason opener where most of the other veterans took the night off. I’m not ready to say that Harmon, who is a useful center fielder and depth piece, is in jeopardy of losing his roster spot. But he made a few poor reads against the Lions, and he’s taking reps with backups during practice. Harmon’s 42.8 (out of 100) game grade against the Lions from Pro Football Focus was the second-worst on the Patriots defense only ahead of Duke Dawson.

We didn’t get to see much of Sony Michel in the passing game in his rookie season, but based on camp, we should see more of it in year two. On Monday, the Patriots rolled out a two running back set that featured Michel, James White, Ben Watson, Phillip Dorsett, Jakobi Meyers and Tom Brady at quarterback. I love the idea of this package. With White’s skill set, the Pats can be effective both running and passing out of this look. They can put two backs in the backfield or flex White as a receiver on the outside while maintaining a running threat with Sony in the game. We didn’t get to see a White-Michel duo often last season because Sony was a bit behind as a pass-catcher. Now, with a full training camp, Michel is starting to show promise in that regard.

An interesting development in the punter battle as fifth-round pick Jake Bailey held on field goals for the first time this summer. Typically, that’s Ryan Allen’s job. If Bailey is going to beat out Allen, the Patriots will need a new holder, and, notably, Bailey is now practicing in that role.

Williams: the rookie is starting to make progress with a two-INT day on Monday. Williams’s technique at the line of scrimmage has improved, which is helping him mask his lack of long speed. Now that he’s staying in phase more often, his length, ball skills and physicality are showing up more often.

Meyers: another day for “all-day” Meyers. The Pats rookie made a spectacular diving catch in team drills, but it was a rep in one-on-ones that stood out to me. Meyers shook Jon Jones badly with a nifty deep out where he set up an inside break in his stem, faked inside and then smoothly broke it outside to lose Jones. Meyers isn’t overly explosive or speedy in a straight line, but he runs excellent routes. Against man coverage, he’s terrific at setting up defenders in his stems to create separation in his breaks.

Harris: wanted to put Harris here after receiving questions about his lack of playing time on Thursday night. The rookie was a regular participant in Monday’s session and continues to look the part of a between the tackles back. He’s likely sitting out some of the preseason to manage his workload. The Patriots have camp backs Brandon Bolden and Nick Brossette taking the big blows in preseason games so that Michel, White and Harris will be fresh for the regular season.

Harris: Harris is no longer the darling of camp as everyone turns their attention to Jakobi Meyers. He dropped another pass on Monday after two went off his hands on Thursday night. He did make a nice leaping catch later in practice, though. I still think Harris makes the team, but Meyers is now a lock while Braxton Berrios and Dontrelle Inman are quickly catching up to Harris for the fifth spot.

Dawson – I feel bad ragging on Dawson day after day, but it was another bad one for him on Monday. Dawson lost all four of his reps in one-on-ones as he continues to struggle to keep up with receivers when they change directions at the top of routes. He’s really struggling right now.

Allen – Allen lost out on holding duties on Monday and got beat once again by Bailey during punting drills. Allen’s consistency and experience still give him a chance to make it over Bailey. But it’s becoming clear that Bailey is the more talented and versatile player.