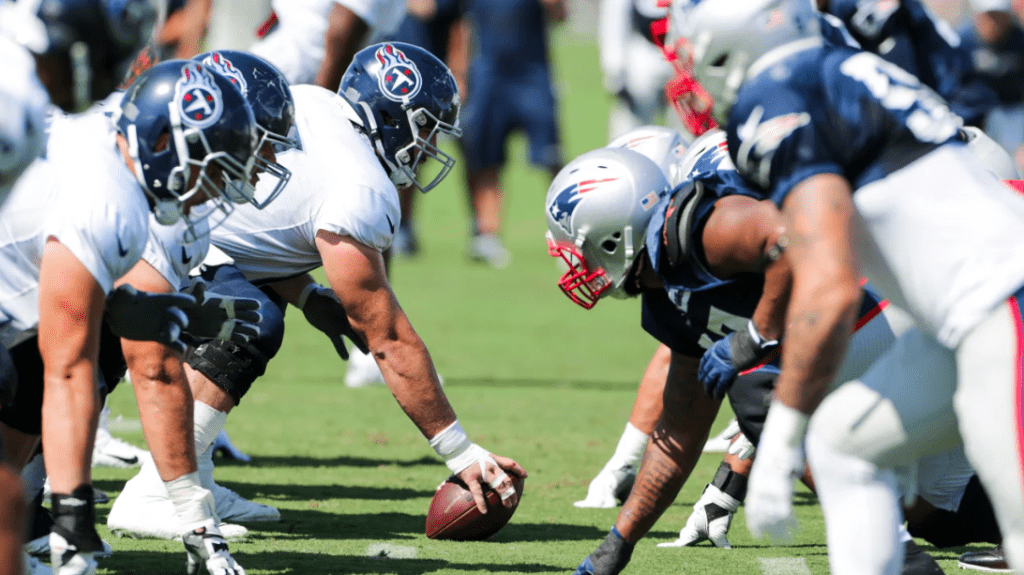 NASHVILLE, Tenn — the Patriots wrapped up training camp with one last joint practice in 92-degree heat against the Tennessee Titans on Thursday.

The Patriots’ injuries at their offensive skill positions are beginning to have a significant impact on these practices.

Phillip Dorsett and Maurice Harris sat out the session along with top pick N’Keal Harry and tight ends Stephen Anderson and Matt LaCosse.

The Patriots will win 12 games and be in the AFC Championship Game in January, and those that doubted their weapons will look foolish; we all know this to be true.

But it’s hard to ignore the lackluster skill group that was on the field in Tennessee, and if it weren’t the Patriots, we’d be a lot more worried.

As noted yesterday, we watched practice from the sideline, making it difficult to follow both sides of the ball closely.

On Thursday, I followed the defense after watching the offense on Wednesday.

With that in mind, let’s empty the notebook one last time in training camp:

The Patriots opened the first team period in a base 3-4 defense with four linebackers on the field, a true base package, not a nickel alignment. Here’s how the defense lined up:

After a run-heavy start to the period, the Patriots then subbed in a lighter group that included Michael Bennett at defensive end, and Shilique Calhoun and John Simon as standup edge rushers. Derek Rivers also saw some time rotating in with Calhoun.

One last note, Terrence Brooks is carving out a role on defense, he’s not just a special teamer right now. Brooks looks like a backup to Patrick Chung or a potential sixth defensive back in the box.

After the first 11-on-11 period, the Patriots defense and Titans offense took part in a red zone seven-on-seven session that the Patriots starters thoroughly dominated. With Marcus Mariota and Ryan Tannehill in the huddle, the following five-play sequence occurred: near interception by Jon Jones, three consecutive throwaways, pass defended by Stephon Gilmore on AJ Brown. On the Jones almost-INT, the Patriots defense passed off a snag concept perfectly with Jones driving on the flat route. The coverage ability of this group is superb, but so is the communication as they passed off the Titans’ red zone passing concepts with ease.

3. Michael Bennett Lurking in the Trenches

With Bennett, it feels like the veteran is waiting patiently, while still working on his craft, for the regular season. He had one would-be run stop today where he was on the backside of an outsize zone handoff, and he ran down the line of scrimmage to make the tackle. He’s also a problem for the opposing offensive line on almost every snap in the passing game. Bennett rushed from multiple alignments including straight up over the tackle (five-technique), shaded over the guard and on the center. In training camp, there’s no tackling to the ground or hitting the QB, but you can tell that Bennett is still a force.

The castoff from Oakland continues to impress me every chance I get to watch him work. On Thursday, Calhoun contributed to a run stop by setting a hard edge forcing the running back to stop in the hole. Later on, he roasted Titans offensive tackle Dennis Kelly with a punch and dip move that would have resulted in a sack. Calhoun is much stronger at the point of attack than expected. He’s a physical player, and you can hear him pop someone from the sideline. He’s playing his way onto the roster.

The second-round pick from Vanderbilt looks like a rookie going through his first training camp. Fellow cornerback Duke Dawson had to help Williams with the play call a few times, and Williams is still raw in his overall approach. However, his length and physicality flashed in a one-on-one rep against Titans wide receiver Corey Davis.

On the rep, Williams showed great patience to maintain his inside leverage forcing Davis into the sideline after the Titans wideout gave him a little inside fake on his release. Then, Williams played through the receiver on the fade and found the football in the air to knock the pass away. Overall, great technique from the rookie.

Dawson – the second-year corner had his best practice of camp breaking up two passes and staying sticky in man coverage. Dawson doesn’t have the quickness to react at the top of routes, but when he anticipates route breaks based on what he sees he can be effective. It was good to see him get his hands on a few passes, something he struggled with until today.

Watson – the 38-year-old can still run. He reminded us of this fact when he caught a 70-yard touchdown pass from Tom Brady against Titans starting linebacker Jayon Brown. Watson ran right through the middle of the Tennessee defense and left Brown in his dust.

Meyers – the undrafted rookie caught more passes from Tom Brady than any other receiver in camp (23) and is now doing it against starting-caliber competition. On Thursday, Meyers caught two balls in one-on-ones over Titans starters Adoree Jackson and Kevin Byard. Meyers is extremely smooth in his releases to get defensive backs on their heels and then finishes at the top of his routes with strong hands and a large catch radius. If first-round pick N’Keal Harry made these plays instead of Meyers, people would be out buying the jersey already.

WR Depth – the good news is that the Patriots haven’t lost any of their wide receivers to season-ending injuries. The bad news is that Brady had to break the huddle with Gunner Olzenski and Damoun Patterson over the last two days. There’s potential with this group, but we haven’t seen it whole yet. There are 24 days until the opener for Edelman, Harry, Dorsett and Harris to get healthy.

TEs Other Than Watson – Anderson and LaCosse are hurt and were limited one-dimensional options when healthy. Izzo and Beck give you nothing in the passing game. Eric Saubert is a self-described “utility man” and special teamer with five career receptions. Other than Ben Watson, there isn’t much to be excited about with this group.

Skipper – the Pats offensive tackle had a rough go of it with the Nashville weather blowing chunks a few times over the last few days. He also didn’t hold up particularly well in pass protection on Thursday. Skipper’s footwork and approach still need a lot of work.