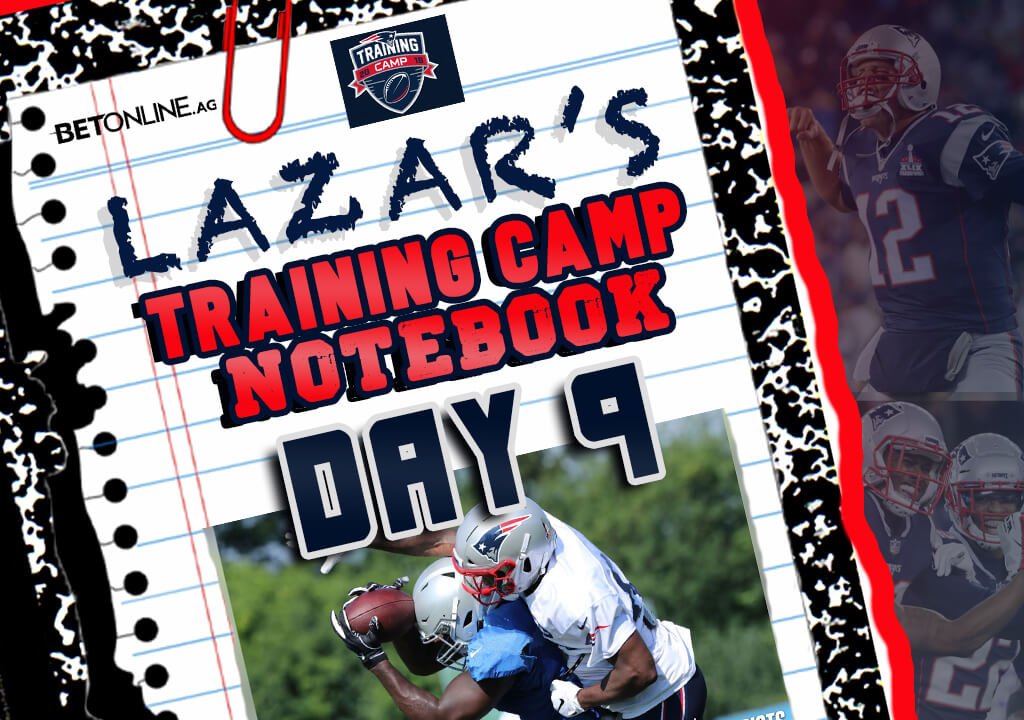 ALLEN PARK, Mich — day one of Patriots-Lions joint practices went to the defending champs as there were several positive takeaways for Tom Brady and company on Monday.

The Patriots offense, which struggled against the New England defense in Foxboro, had a productive day against Matt Patricia’s bunch.

Brady was 19-of-27 during team drills and was throwing in-rhythm on many of his throws to the likes of Jakobi Meyers, N’Keal Harry, Phillip Dorsett and even Braxton Berrios.

The Pats QB led a two-minute drill towards the end of practice where he threw complete on four of five passes to start the drive connecting with Meyers, Berrios (twice) and Dorsett.

We’ll have more on Brady and his receivers later, but first, there was a surprise absence as defensive captain Patrick Chung wasn’t on the field.

Chung was in a non-contact red jersey for seven of the first eight practices in Foxboro, and the Pats are likely erring on the side of caution during these physical joint practices.

Hate to start things off with contract talk, but whenever the GOAT speaks on a newly signed extension, it’s worth mentioning. Brady had some interesting comments about his new deal noting that he’s in uncharted territory at 42 years old. Brady sounds like he’s truly year-to-year, and I don’t mean in the “we are all year-to-year” kind of way. He seemed content with his 2019 salary but acknowledged that the two-year “extension” is mostly a placeholder. Brady gets a pay bump in 2019, avoids the franchise tag in 2020 and the Patriots get $5.5 million in cap space. In his own words, Brady said “it is what it is” about his new contract. He didn’t sound thrilled with how things turned out.

2. Jakobi “All Day” Meyers At It Again

Let’s get to the stuff on the field where undrafted rookie wide receiver Jakobi Meyers was open all day long leading the team in receptions during team drills. Meyers made a terrific grab along the sideline in a two-minute drill extending for the ball while tapping his toes in bounds, but one of his grabs earlier on stood out more. The Patriots ran a play-action pass where Meyers read the cornerbacks technique perfectly. The corner played off-coverage and retreated at the snap, so Meyers stopped his route at eight yards instead of getting vertical, and Brady hit him as soon as he came out of his break. Meyers sees the defense the same way that Brady does, and along with great hands, gets to the right spot often. We’ll see how he looks on game day, but at this rate, it would be shocking if he doesn’t make the team.

After an active practice on Friday, Wynn was back to being a spectator on Monday. The 2018 first-round pick is still not cleared for contact sitting out both one-on-ones and team drills. Dan Skipper was once again the starting left tackle. Skipper lost to power a few times in one-on-ones, but he held up well in team drills protecting Brady’s blindside. With Skipper, he’s struggling against power rushers and with moving defenders off the ball in the running game. The Patriots starting offense is having a tough time running behind the left side right now.

As a receiver, Harry had a highlight-reel catch laying out to haul in a bomb from Brady during team drills, but as a blocker, he’s starting to catch my eye. Harry’s got the physical make up to be a terrific perimeter blocker, and he pushed around a few different Detroit cornerbacks during Monday’s session. Harry is extremely physical, and blocking as he has over the last few practices will earn him major brownie points with Bill Belichick.

After a few great days of practice at the end of last week, the rookie had an off day against a new defense which isn’t a major surprise. Patricia threw some things at Stidham that he hasn’t seen yet, and it caused the rookie to hold onto the ball in the pocket. During a red-zone drill, Stidham couldn’t find the trigger on four consecutive plays before Hoyer replaced him. He also threw an interception early in practice when he lost track of an underneath zone defender. Again, no need to sound the alarm.

7. Jake Bailey Ahead of Ryan Allen in Punter Battle 2019

From this perspective, rookie Jake Bailey is trending towards taking Ryan Allen’s job. Bailey needs to be more consistent, but his punts have more hang time and distance than Allen’s. On Monday, Bailey cleared 4.9 seconds in hang time twice while Allen only cleared 4.0 seconds once. It’ll be tough to cut Allen who was great last season, especially in the Super Bowl, but Bailey has a much better leg.

Collins – the Pats linebacker looked excellent in coverage flying into the flat and forcing a fumble as well. He goes sideline-to-sideline at a different speed than what we have seen over the last few years at linebacker in New England.

Winovich – Winovich beat the Lions’ backup tackle Tyrell Crosby on back-to-back plays during 11-on-11s bull-rushing Crosby quarterback Tom Savage and beating him around the edge the second time. Winovich took more reps with his hand in the ground and is starting to make plays regularly. He should get some looks with the starting defense soon.

Calhoun – last week, Calhoun made the “up” list with a terrific spin move in one-on-ones on Marcus Cannon. He’s on the list again because of his pass-rush abilities. He took some reps with the starting defense on Monday and was in the backfield quite a bit during team drills.

Harmon – Lions tight end Jerome Cunningham beat Harmon for a touchdown during seven-on-sevens and the safety was late to defend a deep in-cut during 11s. Harmon might’ve backed off the receiver instead of laying him out, but he looked a little late to the throw. He’s not in jeopardy of losing his roster spot, but it’s been a so-so camp for the veteran.

McCourty – if there’s been one weak link in the starting secondary it’s Jason McCourty. He hasn’t been bad by any means, but as the QBs shy away from Gilmore, they’ve targeted McCourty with some success. I still expect McCourty to have a role on this team. However, it’s becoming harder and harder to take JC Jackson off the field.

LaCosse – after a strong start to camp, the big tight end hasn’t done much of anything in the passing game. LaCosse has a vertical speed element to his game, but he struggled to create separation on Monday.