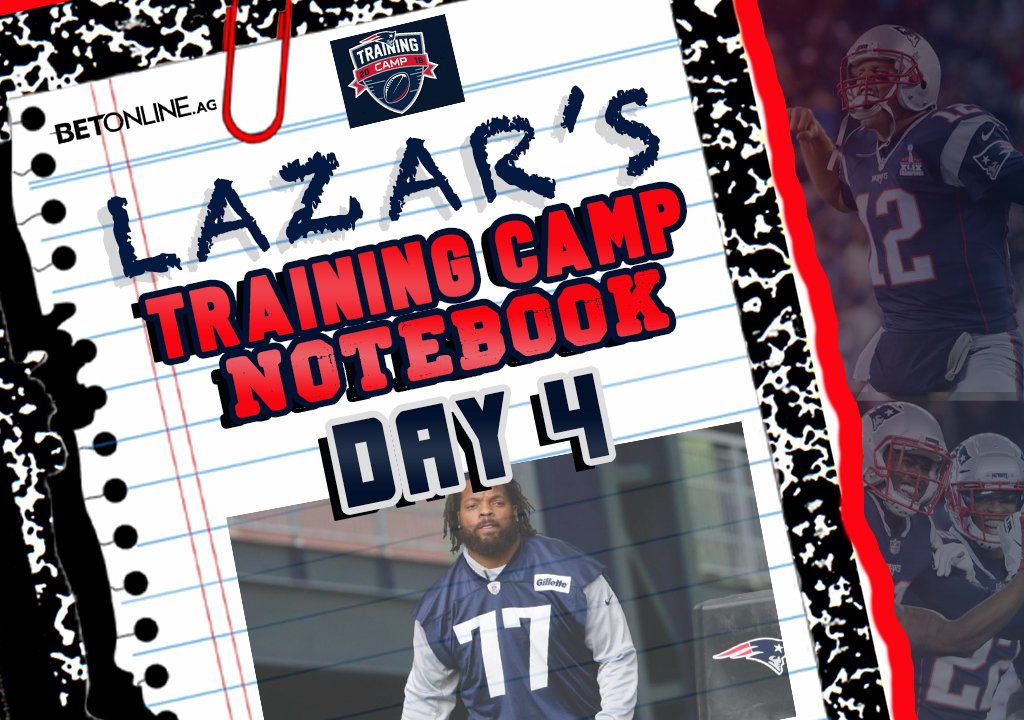 FOXBOROUGH — After a short session on Saturday, the Patriots ramped things up on day four of training camp with their most competitive practice of the week.

The end of the nearly two-hour practice featured full-speed 11-on-11s that were both more competitive and physical than anything we’ve seen up until this point.

For what is worth, the starting defense got the better of the starting offense with two consecutive run stops at the goal line and let the offense hear about it after. Tom Brady was less than thrilled about the result.

For the first time during training camp, veteran defensive end Michael Bennett participated in practice after attending to a personal matter.

Bennett flat out dominated almost every rep against the Patriots’ backup offensive linemen as he earns a role with the starting unit.

On one play, Bennett beat rookie left guard Hjalte Froholdt with a nasty arm over move displaying great quickness off the ball as well. Although his pass-rush moves were impressive, Bennett’s ability to move laterally into his gap in lightning-quick fashion was excellent.

We know he can rush the passer, but he’ll need to be a two-way force for the Patriots this season.

With Bennett back, the Patriots had close to full attendance with wide receiver Dontrelle Inman and rookie Byron Cowart as the only ones missing from Sunday’s practice (excludes PUP/NFI players).

The All-Pro cornerback has yet to surrender a completion during team drills and is in complete control out there. The Patriots don’t have any wide receivers right now that can truly test Gilmore, but he looks as good as ever, and dare I say better than he did at this time last year. What always stands out to me with Gilmore is how calm he is in coverage, even when the ball is headed his direction or in the off-chance he was initially beat on a route. He’s never in a bad position, and when he is, he makes up the distance with ease. Truly a master at his craft.

Throughout the first four days, Bill Belichick has put a heavy emphasis on red zone work. Today, Brady’s side session during the special teams period was with his new group of tight ends. Brady took the tight ends down to the goal line and practiced different routes into the end zone. He seemed very pleased with the way both Ben Watson and Matt LaCosse ran their routes during the session. Backup quarterback Brian Hoyer worked with N’Keal Harry, Sony Michel and James White on some passing drills during that time as well.

Side note: Brady was much sharper today than on Saturday for those concerned about his performance in July. He completed ten-straight passes during team drills at one point and threw a laser up the seam to Ben Watson for a touchdown.

Nothing new to report on second-year left tackle Isaiah Wynn as he continues to watch portions of practice while disappearing to the lower field at times. However, it was notable to see veteran Dan Skipper get a chance to play left tackle on Sunday. Skipper is a monster at six-foot-ten, 310 pounds and has better foot speed than you’d expect for a big guy. He was one-for-two in one on ones today, but the rep he won was impressive. He did a nice job of moving his feet and changing directions to block an inside counter by Kyle Van Noy. Although Skipper’s stock is on the rise, the Patriots also need to give Joe Thuney reps at left guard to keep him sharp at his natural position.

The Patriots ran a full-field hurry up drill at the beginning of practice. Although it was against air, the skill groups with Tom Brady and backup Brian Hoyer were as follows:

We’ll go more in-depth on Harris and Berrios later, but they continue to have strong offseasons.

Melifonwu – the third-year safety has three interceptions through four training camp practices playing mostly as a box safety matched up against tight ends. His interception of a Brian Hoyer pass intended for Ben Watson was the play of the day on Sunday, and he also ran stride-for-stride with Stephen Anderson nearly 40 yards down the field to force an incompletion. He is making it difficult for the Patriots to cut him at this rate.

Harris – “all-day Mo” is my new nickname for Maurice Harris. Every single day he’s out there making plays, and his grasp of the offense in such a short period of time is remarkable.

Berrios – Berrios looks like a different player compared to a year ago. He’s more explosive as a downfield route runner and a much tougher cover for New England’s defensive backs. He shook Jon Jones on a crossing route to haul in his first pass from Tom Brady during 11-on-11s in camp. Berrios could give the Patriots a discount version of Edelman and Amendola.

Froholdt – it cuts me deep to put Hjalte on the “down” list, but he had his “hey rookie, welcome to the NFL” practice today going up against Michael Bennett.

Lang – Lang rotated in some at left tackle with the starting offensive line on the first three days, but it was all Skipper on Sunday. Lang also got beat cleanly in one-on-ones by Trent Harris.

Harmon – Harmon hasn’t played poorly in camp, but both Terrence Brooks and Melifonwu are rotating in as the extra defensive back as much as Harmon with the starters. He’ll still make the team, but the Pats are trying out other players there.