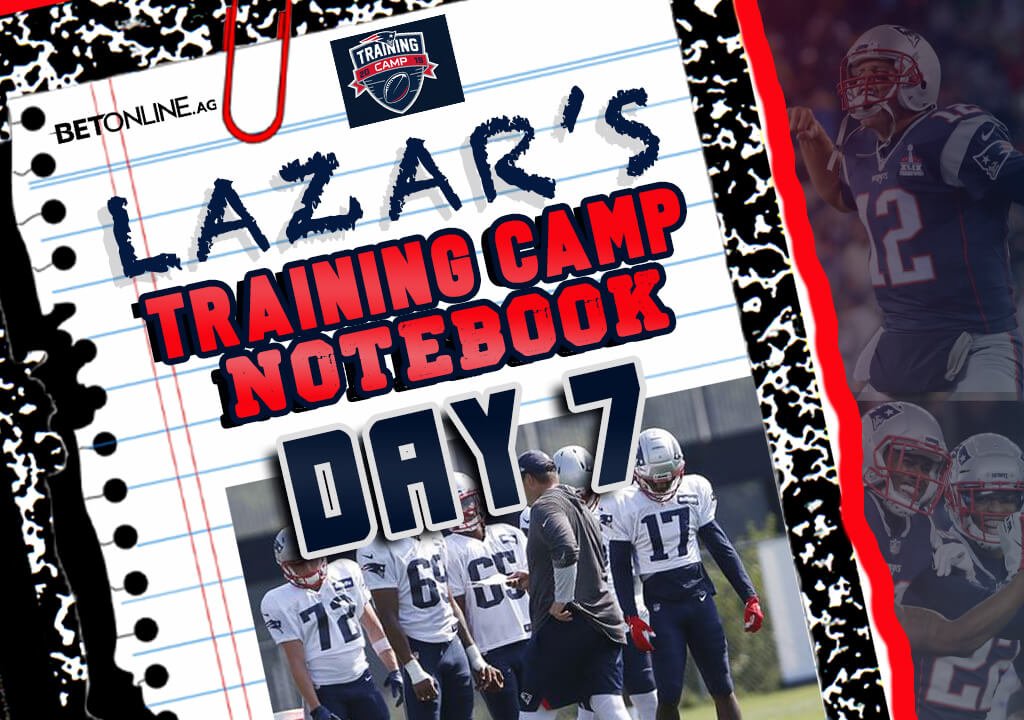 FOXBOROUGH — the Patriots are in the grind of training now as they went through practice number seven on Thursday morning at Gillette Stadium.

Once again, the defense won the day overall, but the wide receivers made a late push in team drills with a few acrobatic catches from first-round pick N’Keal Harry, rookie UDFA Jakobi Meyers and Phillip Dorsett.

Tom Brady’s receivers picked it up towards the end of practice, but one general theme that remains an issue is the goal line rush offense.

Bill Belichick’s practices put a heavy emphasis on situational football, and the defense continues to stone the offense on the goal line with interior defenders Mike Pennel and Lawrence Guy leading the charge.

Belichick has said multiple times that running the football is significantly easier than throwing it inside the five-yard line, which is easily explained by the condensed space for receivers in that area of the field.

The Patriots offense wants to come downhill at teams and punch the ball into the end zone, but they haven’t been able to do that in camp.

On the attendance front, the only unexpected absence was veteran tight end Lance Kendricks. Kendricks left practice early on Wednesday with an unknown injury.

If it feels like my opinions on Harry are inconsistent, it’s because he has seesawed throughout camp, which isn’t a surprise for a rookie. Harry made up for his four drops on Wednesday with his best practice to date. He made two contested catches on deep balls, and he should’ve had two other catches downfield, but his quarterbacks let him down. On the first bomb, Harry used an outside release to get off a jam from Keion Crossen and stacked the Pats CB down the sideline and then laid out to haul in a well-thrown pass by Jarrett Stidham. Later on, Harry went over the top of Joejuan Williams on another deep ball to snatch a pass from Hoyer. Although the long receptions were impressive, Harry’s route against JC Jackson earlier in the session where he faked a post route and then ran a corner got Jackson turned around. Thursday was the first practice of camp where Harry mad multiple noteworthy plays and the mental toughness to bounce back from yesterday is great to see as well.

Sticking with the wide receivers, during positional drills the Patriots’ coaching staff broke up the group into outside receivers and inside receivers. Here are how the two groups looked:

No major surprises, but it’s notable that they view Meyers as an outside guy after he played a healthy portion of his snaps in the slot at NC State.

One last point on the wide receivers and undrafted rookie Jakobi Meyers. Meyers saw first-team reps for the first time in training camp and made the most of his opportunities. In the play of training camp so far, Meyers tipped an underthrown deep ball from Jarrett Stidham over defensive backs Keion Crossen and Patrick Chung and caught his rebound in the end zone. Although the circus catch was insane, what stands out with Meyers is his consistent hands, catch radius and route savviness. A High School quarterback, it’s clear that Meyers sees the openings in coverage like a QB with the intelligence to find the soft spots in zone and use his leverage to get open against man. The NC State product isn’t the best athlete, which is why he went undrafted, but he’s the type of consistent that Tom Brady loves; get to the right spot and catch the ball.

4. Wynn Watch: We Have Some Movement

Wynn sat out team drills as he has all of camp, but he did participate in a hurry-up walkthrough at the beginning of practice and in positional drills, which is a good sign. Dan Skipper was at left tackle again with the starting offensive line during 11-on-11s.

Karras – Karras won’t get any style points, but his consistency and technique make him one of the most valuable depth players on the roster. He can play all three spots on the interior and gives the Patriots a starting-caliber interior offensive lineman in a reserve role. Karras was the starting center during team drills on Thursday as David Andrews works his way back.

Ross – the undrafted rookie continues to impress in one-on-ones winning two out of three reps with two pass breakups both against Maurice Harris. In another year where the depth wasn’t this good at corner, Ross would make the Patriots roster.

Cowart – the rookie got back on the field and is starting to make plays. He had a few nice reps in one-on-ones and made a goal-line stuff during team drills.

LaCosse- the Pats tight end dropped an easy completion from Tom Brady in team drills and has slowed down a bit after a hot start to camp. Ben Watson, despite his suspension, is the clear cut starter.

Starting OL – the Patriots offense had to run a lap after members of the starting offensive line false-started on two plays in a row and the group couldn’t move the Pats’ defensive front off the goal line. The Pats miss Trent Brown, Gronk and Dwayne Allen in the running game.

Gilmore (as QB) – Gilmore quarterbacked the Patriots defense against the offense in a fun ending to practice on Thursday. Gilmore did complete two out of three passes, but one was on a jet sweep “pop” pass to Jon Jones, and the other was a screen that went nowhere to Jason McCourty. Gilmore didn’t set his feet with enough regularity and needs to work on his release point as well. Good thing he’s pretty good at playing cornerback.