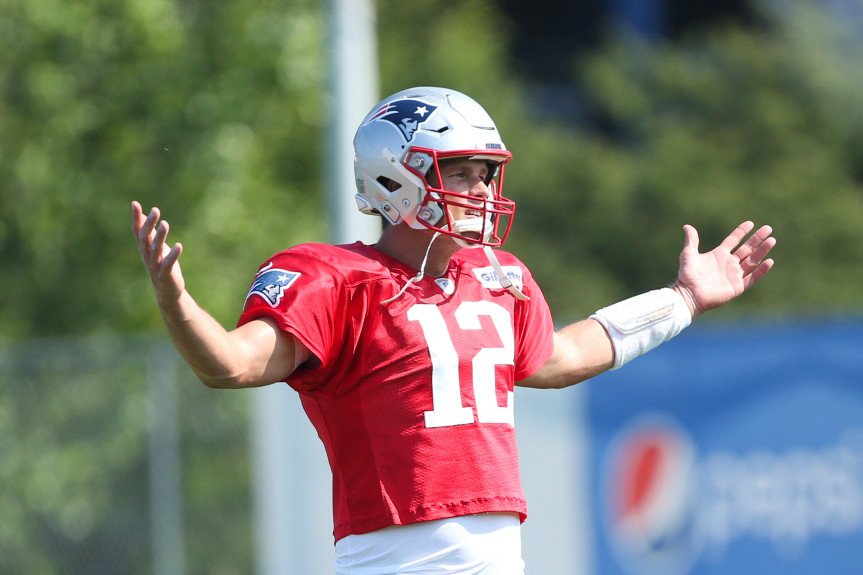 FOXBOROUGH — the Patriots held their sixth practice of training camp on Wednesday morning, and things are beginning to get interesting as roster battles take shape.

Tom Brady, running back James White and tight end Ben Watson all acknowledged that the defense won the day.

Brady said that the Patriots defense is a challenge for the offense saying that it’s difficult to complete a pass on the New England secondary.

Although that’s great to hear about the defense, it also tells us something that we already knew about the offense; there are holes and general inexperience with this group.

Mainly, the left tackle position continues to be an area of concern as second-year tackle Isaiah Wynn sat out the majority of practice, and veteran Dan Skipper struggled.

Skipper has great size (6-10, 310 pounds) and decent feet for a big guy but his power both as a run blocker and against power rushers is a weakness.

On the attendance front, the Patriots were as close to hole as they’ve been all camp as rookie Byron Cowart and veteran Dontrelle Inman returned to practice.

However, both running back Rex Burkhead and newly signed tight end Lance Kendricks missed portions of practice with injuries that occurred during the session.

In a positive development, second-year running back Sony Michel was a full participant in practice for the first time this summer. Michel had an offseason cleanup procedure on his knee, and the team eased him back into action. Michel looks good, making hard cuts without hesitation and with slightly more quickness than last season. He also motioned out wide as a receiver during 11s, although Tom Brady needed to give him some direction to get him lined up correctly. Most running plays aren’t competitive once the back gets into the secondary, so we’ll have to wait and see if Sony found another gear. With that said, it was a positive day for Michel.

For the first time in camp, the Patriots’ top pick in 2019 had an off day. Harry’s had some flashes throughout camp, but the team has to be begging for more consistency out of the rookie. Yes, we are only a few months into his NFL career, but Harry is a major part of this team in 2019; it’s not about the future with him, they need him to be good right away. Harry had four drops during the session that were focus drops. In other words, he got open but lost focus at the last second, causing him to drop the football. He also lined up incorrectly on one play, which is a repeat offense after he did the same thing over the weekend. On the other end of the spectrum, Harry also had two spectacular catches showing off his strength and catch radius. On the first one, he ran a fade against Jason McCourty and boxed out the Pats corner to haul in an off-target throw by Brian Hoyer. On the second, Harry broke upfield after he was covered initially and made an acrobatic catch behind the defense on a pass from Brady. The flashes are there, but the Patriots need more consistency from the rookie.

3. Notes From One-on-Ones Between WRs and DBs

The Patriots had a competitive session of one-on-ones between the wide receivers and defensive backs that was very illuminating for multiple players. The defensive backs won the day. Here are a few notes from the drill with more to come later on:

Harry – the good news for the rookie after a tough day was that his route releases are improving against press coverage, which was an area of weakness for Harry in college. Harry is getting into his releases faster with less wasted movement and is starting to use his hands more aggressively to help beat the jam. He had a nice rep against JC Jackson where he swatted Jackson’s hands out of the way and broke inside for a catch on an in-cut. He didn’t create a ton of separation, but he’s improving.

Dorsett – Dorsett is a nightmare for defensive backs to cover on an island in these drills because of his speed. He’s a top-three receiver on this team right now. If he doesn’t break out production-wise, it’s not a lack of talent that’s holding him back.

Joejuan Williams – Williams had a much better day overall with a deep pass breakup in team drills on a ball intended for Dorsett, and also held his own in one-on-ones. His physicality to redirect receivers came out today, and he did a better job of running with guys down the sideline.

Damoun Patterson – Patterson is a long shot to make the roster, but his speed is undeniable. He ran right by JC Jackson and hauled in a perfectly thrown deep ball from Brady for a touchdown.

4. Checking on the Punter Battle

We got another chance to watch Ryan Allen and fifth-round pick Jake Bailey today, and Bailey continues to impress with his booming leg. On Allen’s four punts, he had an average hang time of 4.22 seconds compared to a 4.77 average for Bailey. Bailey also had the only punt of the day that eclipsed five seconds clocking in at 5.16 seconds. Bailey was a lot more consistent with his boots on Wednesday and is winning the battle right now overall.

Jones – the Pats slot corner is having a terrific camp. He broke up two passes during 11s and was locking down every receiver sent in his direction. At this stage, it would be stunning to see the team move on from Jones via trade. He’s one of the best corners they have.

Ross – did the Patriots find another undrafted rookie cornerback? Ross won all of his reps in one-on-ones against Braxton Berrios, Dontrelle Inman and Gunner Olszewski breaking up passes intended for Berrios and Olszewski. At only 5-9, he fits the mold of a slot type, but he has the same sticky man coverage style as other UDFA success stories in New England.

Calhoun – Calhoun is a long shot to make the roster with the depth on the edge. But he had one of the nastiness reps in one-on-ones I’ve seen yet spinning around Marcus Cannon. Calhoun has a variety of pass rush moves and knows how to rush the passer. If the Patriots don’t like what they’re getting out of Derek Rivers or John Simon, Calhoun could sneak up the depth chart.

Skipper – Skipper struggled during one-on-ones getting thrown to the ground by a long arm from Ufomba Kamalu, and as noted earlier, he is not a people mover in the running game. As of now, Skipper does not look like a starting left tackle.

Berrios – I’ve been riding the Berrios hype train all camp, but he had a few bad drops on Wednesday and struggled to create separation in one-on-ones.

Olszewski – Olszewski is a fun underdog story, and he has climbed into the second receiver group but was out-muscled by everyone in one-on-ones.