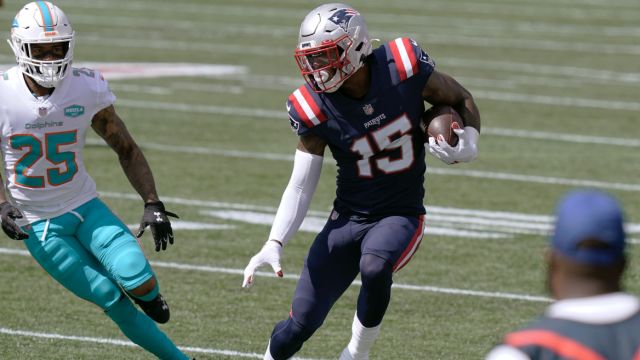 The Patriots are turning the page to Russell Wilson and the Seattle Seahawks after gaining positive momentum from their victory over the Dolphins in the season-opener.

Seattle also won its opener on the road against the Atlanta Falcons, whose defense got shredded through the air in a 38-25 blowout with Wilson throwing four touchdowns.

Seahawks coach Pete Carroll has fallen out of favor with many in recent seasons due to his commitment to the run game and refusing to play sub-packages defensively.

Last season, the Seahawks were at the bottom of the league in early-down pass frequency while they led the NFL with 67 percent of their snaps coming in base defense (no extra defensive backs).

However, Seattle bucked that trend against the Falcons by passing the ball the second-most on early-downs and only running their base defense on 30 percent of their snaps.

The Seahawks we saw last Sunday were not the same Seattle squad we’ve seen during the Wilson-Carroll era over the last decade; they put the game in Wilson’s hands and evolved with the times defensively, at least for one week. We’ll see if it lasts.

Unfortunately, the folks at NFL.com are claiming there’s a technical issue with the coaches film from Sunday’s action. I’m not going to get on my soapbox, but there’s still no all-22 for the paying public as of Wednesday afternoon. It sucks, but we are doing our best.

There are a few leftovers from the Patriots’ win over the Dolphins that we didn’t get to discuss in detail yet because I was waiting for the tape to drop, but we’ll get to them here.

Below are a handful of mid-week notes on the Patriots as they prepare for a trip out west:

The one aspect of Cam’s game that has always come into question is his unorthodox throwing motion and sometimes spotty accuracy. In Carolina, Newton had some bad tendencies of loading up on his back foot and stepping towards the sideline rather than towards his target. As a result, his downfield accuracy was up and down.

Newton seems to be improving in that regard if Sunday’s win is any indication, thanks to his work with quarterbacks coach Jedd Fisch. As shown above, Newton is throwing from a balanced base and throwing in-rhythm where his feet are in-sync with the play’s timing. Fisch told us that, in his mind, quarterbacks could improve their downfield ball placement by working on their footwork and improving their anticipation and mental processing. It’s only the first game, but that’s exactly what Newton did on Sunday. Here’s more Fisch on Newton from Wednesday’s availability:

“It starts not just the mental side of learning the system but then tying in your lower body to every throw, and I think we spoke about it a couple weeks ago, about our belief that you can really work with a QB’s lower body and from the neck up. The throwing motion persay is a little tough to tweak at 31 years old, but I think that we focus really hard over the course of time in getting his footwork to time up with each play that we called.”

2. Newton Still a Work in Progress at the Line of Scrimmage

In an extremely positive day, the only blemishes on Cam’s New England debut were a few instances where he failed to set the protection correctly and was pressured as a result.

For example, on this play, the Dolphins walk linebacker Jerome Baker up over left guard Joe Thuney, who will pull at the snap on the play-action concept. Baker blitzes, Newton doesn’t reset the protection for Thuney to take him, and the Miami linebacker comes through untouched for a sack. That one is on the quarterback for not changing the protection.

Newton had second-year receiver N’Keal Harry’s back when asked about his fumble on Sunday during his weekly press conference. The Pats quarterback pointed out that Harry had a good day outside of the fumble, and that although mistakes like that can’t happen, it shouldn’t take away from the good things the 2019 first-round pick did against Miami.

As Newton said, one of those good things was Harry bailing Newton out on a poor throw after Newton released the ball quickly into the flat to avoid a zero blitz. Newton’s support and understanding of Harry’s situation has to be a welcomed source of confidence for the Pats wideout. Here is Newton’s full answer on Harry:

“I spoke with N’Keal, and let’s just put a lot of things into perspective here. Did he have a good game? Yes, he did. I think that one play overshadowed the production that he did have. He bailed me out on a play, an inaccurate pass that he came down with and got the first down. He did pretty good in the run game. He had a couple of contested catches, and all of that was kind of for naught because a lot of people just focused on the fumble. And granted, I’ll be the first person to tell you, he knows – or he would be the first person to tell you that he knows that’s unacceptable. But obviously, when you put things into perspective and call an apple an apple and a spade a spade, it was just one mistake. Him still being a young player trying to come into his own. Things like that will happen, you just want them to be minimized as much as possible. But he’s making leaps and strides as everyone would expect them to be. He’s growing up into his best self and for him, after chatting with him, he knows. He knows he has to make practice game-like and that’s the only thing that you can imagine. The thing that makes me and N’Keal closer is I told him my speil, obviously being in Carolina I’ve had a N’Keal in my life for as long as my career has existed. Being a high invested draft pick dating back to Kelvin Benjamin to Devin Funchess, me also being young at the time too, and investing in Curtis Samuel, DJ Moore, Christian McCaffrey, so it’s nothing new to come on a team and you have a young talent at receiver and trying to morph him into the best player he can possibly be. And I know N’Keal is buying in, not only to my theory and methods but to the team’s as well and plays like that are going to happen, we just hope it’s the only time it will happen.

There were several discussions about Julian Edelman’s lack of playing time on Sunday, as the Pats wideout was only on the field for 57 percent of the offensive snaps. Edelman’s knee issue that slowed him throughout camp was removed from the final injury report, but that’s a good place to start as the Patriots try to preserve him for the long haul. A deeper dive into his snap counts shows that Edelman was on the field for 20 of the Patriots’ 22 passing plays but only played 17 of 42 run snaps. In other words, the Pats are using Edelman in passing situations while saving him in run situations.

Still, the one area where Edelman didn’t miss a beat was shredding the Miami secondary on crossing patterns. Since 2019, Edelman leads the entire NFL in both receptions (27) and receiving yards (425) on crossing routes. Edelman’s ability to burst instantly into the secondary, get vertical, then cut without slowing down to get defenders on his back makes him almost unrecoverable on those routes. He’s also great at reading middle of the field zones out, which was the case on the play above. Edelman didn’t play as much as usual on Sunday, but his effectiveness didn’t wane when he got on the field.

In his weekly film breakdown series with Scott Zolak, Belichick highlighted a play where Bentley’s inclusion on a stunt upfront blew up the entire blocking scheme. The Patriots need Bentley to be a physical downhill striker that makes a massive impact at the second level of the defense. In Week 1, he did just that, and the head coach seemed pleased with his performance.

The team announced on Wednesday that, along with kicker Nick Folk, defensive back Myles Bryant was called up to the 53-man roster. Bryant had issues sticking with wide receivers on the outside early on in camp, but improved each day and was around the football a lot in the second week, finishing with three interceptions and five pass breakups.

As was the case on his college tape, Bryant has Patriot-like mirroring skills in man coverage with good route anticipation and footwork to stick to slot receivers and tight ends. At 5-foot-8, 183 pounds, Bryant has earned the nickname “I.T.” from his teammates after former Celtics guard Isaiah Thomas. He might be small, but like Thomas, Bryant has a lot of fight in him.