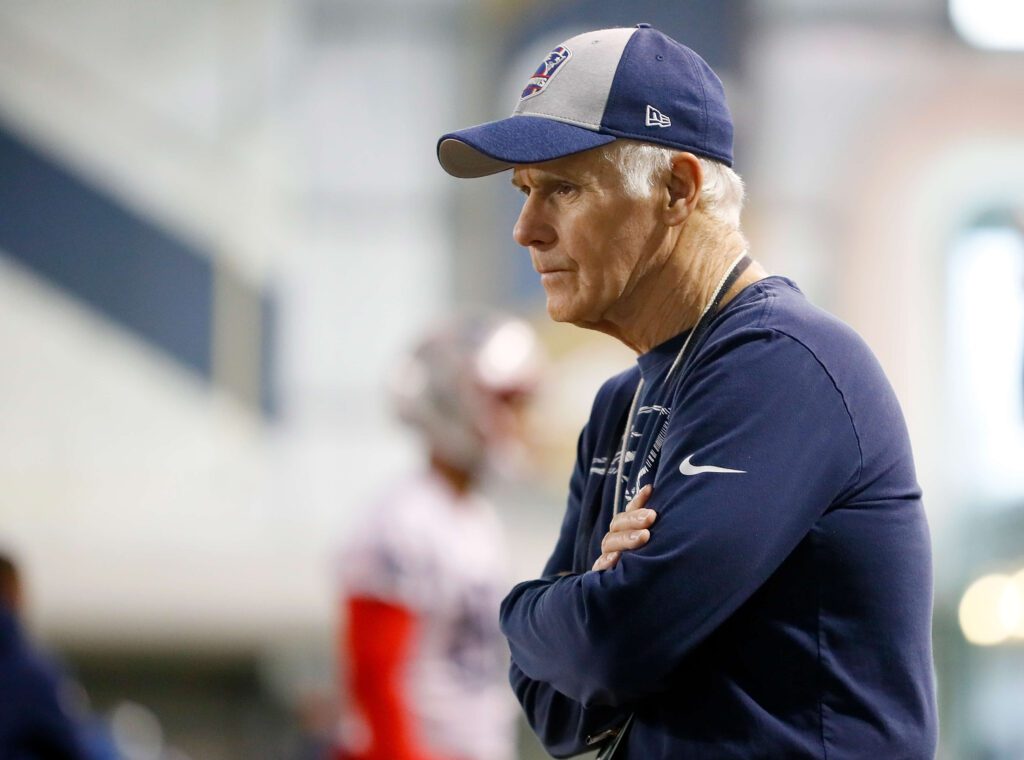 FOXBORO — The Patriots assistant coaches took the stage on Monday afternoon at Gillette Stadium for their first media availability during the 2019 season.

As you’d expect, I sat with offensive line coach Dante Scarnecchia for about ten minutes picking his brain about the players on the Patriots and his coaching philosophies.

Here’s a transcript of our conversation that covered everything from his impressions of Isaiah Wynn to his core beliefs about offensive line play:

Q: Has he learned anything new about Isaiah Wynn since the Patriots drafted him?

DS: “What we know is what we suspected about him when he was playing at Georgia. We thought the guy was a good player and played well in one of the best conferences in America against a lot of good players, and he was a good player. We feel the same way about him now. Every day he’s getting better, he’s getting healthier, he has played almost 50 snaps the last two games and regularly practicing with everyone else, all that is good. He’s not where he needs to be yet, and he knows that. There’s a lot of things he needs to see and experience, but he has a good guy next to him in Joe Thuney that can help. Right now, he’s a work in progress, but we are pleased with how things are progressing.”

Q: What has impressed you the most about Isaiah Wynn so far?

DS: “I think the whole package. He’s a smart guy and a really good worker like all of them. He has a very good skill set; he’s explosive and all those other things. All the things we thought he could do on our evaluations of him at Georgia, you can see in his play right now. We just have to make him consistent. He has a lot of things he hasn’t experienced yet, and he experiences new things every day. He has to memory bank a bunch of them and continue to put it into the database, and when they get dialed up, he has to remember them.”

Q: How does coaching Isaiah Wynn change versus coaching a bigger tackle like Trent Brown?

DS: “I think you coach the individual player and don’t worry about the physical stature. Trent was a huge human being and had really good qualities and has things he needed to work on. I think that’s true for every player we have. Everyone brings something good to the table, and everyone has liabilities; we have to get them to play to their assets and not their liabilities. If we can do that, then they have a chance to do alright and maybe we have a chance to do alright.”

Q: How big is repetition to you in terms of what you drill into the players?

Q: Talking to the offensive line, they said you guys run the similar drills to every day to get the base fundamentals down. Is that the purpose of doing that?

DS: “There’s a lot of truth to that. We hope in all our drills, our goal is that when we watch the games, we see our drills on the game tape. That’s really important to us, and if we see that, then we feel like we are doing the right drills.”

Q: Does a guy have to fit exactly everything that you teach, or can they stick to things they’ve done in the past (asked by WEEI’s Andy Hart)?

DS: “I think we have to make sure that if we give them some leeway relative to their techniques, it has to work, and if it doesn’t work, then there’s no leeway. I really believe that certain things will not allow you to be successful if you do them. If you’re pass blocking and drop your hat, you aren’t pass blocking anybody. If you’re pass blocking and don’t use your hands, it’s not going to work. So there are principles that we absolutely adhere to and absolutely demand that they do them a certain way, and there’s no margin in there. I’m old, and I’m not changing that.”

Q: Is pass protection a passive or aggressive act?

DS: “I think a lot of people describe it as a passive act, but it doesn’t mean you stand there and take the blows. I would hope that we do a great job of using our hands and hitting the guys were are supposed to be pass blocking with our hands. If we do that, I don’t think it’s a passive act. I think it can be aggressive, but it has to be planned aggression and not just a blind dog in a meat house going to knock the hell out of somebody. That’ll never work. There are certain principles that we adhere to.”

DS: “He’s great. He gets the ball out in rhythm, and if we do a good job, we are going to be alright. We have no time parameters in pass protection, none. Don’t want to hear about, ‘Brady’s going to get rid of the ball in three seconds or four seconds.’ However long it takes, we have to block, that’s the rule. If it’s forever, it’s forever.”

Q: What are your impressions of rookie Hjalte Froholdt (asked by Nesn’s Doug Kyed)?

DS: “He played against top competition in college [at Arkansas]. His total background in football is not great. He played high school in America and played in college in America. He’s a bright kid, and he understands a lot of things. What we are trying to do with him is to get him to be more disciplined in the things he does and less wild in the things he does, and he has four holding penalties in three games, and that’s unacceptable. There are habits that we have to fix and techniques we have to get better with him. He’s working hard and trying his best to do it right. We are pleased with his development, but we have a ways to go.”

Q: Do you feel that young players and rookies are rawer in prostyle concepts now that the college game is heavy in schemes like RPOs?

Q: What are the core fundamentals to a good pass set in your eyes?

Q: How have you seen Dan Skipper grow? He has gotten a lot of reps over the summer.

Q: Would you like Dan Skipper to lunge less in pass protection?